In 1995, visionary writer/director Richard Stanley (HARDWARE, DUST DEVIL) got the green light for his dream project: An epic adaptation of H.G. Wells The Island Of Doctor Moreau starring Marlon Brando and Val Kilmer. But only days into production, an unprecedented storm of natural disasters, monstrous egos and disturbing imagery along with chaos, insanity and witchcraft would trigger perhaps the most infamous behind-the-scenes catastrophe in modern movie history. Now director/producer David Gregory (THE THEATRE BIZARRE, PLAGUE TOWN) reveals the untold story behind one of the all-time greatest cinematic train wrecks (Variety) in this wonderfully weird and gripping (Entertainment Weekly) documentary featuring never-before-seen footage, startling new interviews with actors Fairuza Balk and Rob Morrow, studio executives, crew members and for the first time ever the notoriously reclusive Stanley himself, plus nearly 2 hours of exclusive Bonus Features.

In recent years, a new genre of documentary film has started to emerge. It started with a small idea here or there about a tantalizing subject but has exploded with multiple documentaries made every year. These are documentaries about failed film productions. This seems like an odd idea when you look down at the surface of it. After all, who want's to hear about a movie that was so bad that it didn't get made or was an absolute disaster from the first day of shooting to the last? It turns out this material can be exciting, dramatic, horrifying, and even at times heartbreaking. With 'Lost Soul: The Doomed Journey of Richard Stanley's Island of Dr. Moreau' we get an impressive and immersive behind the scenes look at the terrifyingly hellish production for one of the most notoriously terrible films to be released in the last two decades.

Richard Stanley is a bit of an eccentric, but then some of the best visionaries to make it in Hollywood are eccentrics. After making a couple short films, the low-budget sci-fi hit 'Hardware' and the horror/thriller 'Dust Devil,' Stanley was set to explode onto the Hollywood scene as one of many up and coming hot new directors to get their big breaks. With a lifelong fascination and love for H.G. Wells' "The Island of Dr. Moreau," Stanley knew he had the perfect project in mind to be his next big feature film. After hiring concept artist Graham Humphreys to create some artwork that would accompany his script as he shopped it around, Stanley landed Edward R. Pressman as a producer and New Line Cinema as a distributor. What should have been the first signs of glory actually turned out to be the first cracks in the foundation for Richard Stanley's artistic vision.

Stanley was besieged from the first moment the project went into preproduction by calls to alter the script, tone down the visceral visual elements of human/animal hybrids and just to make the film more approachable for a general audience. Then calls came for casting suggestions. Since this film was going to need to make some serious cash, it was going to need a star attached to it to lend some marketability to the picture. Marlon Brando's name was floated for the part of mad genius geneticist Moreau. After the iconic actor shockingly agreed to do the film, the budget exploded past the projected $5 million to $8 million Stanley's script was originally calling for. Then came the need for additional actors to be cast, so Val Kilmer and James Woods were hired. While there were some hiccups in that casting that lead to Woods being let go, Val Kilmer being recast in Woods' role and Rob Morrow being hired to take over Kilmer's role, the film was finally ready to shoot in a secluded jungle section of Queensland Australia. 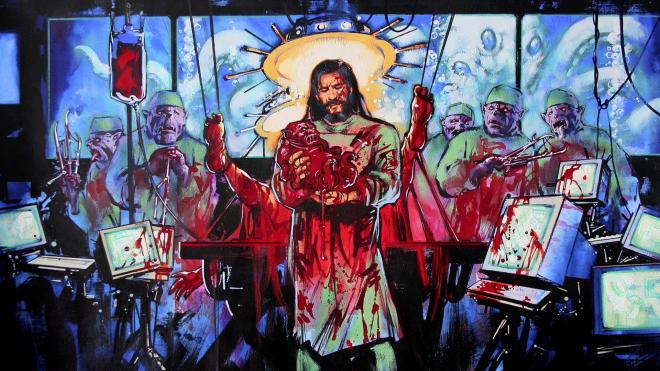 What should have been a simple six to eight-week shoot turned into a prolonged nightmare. Actors would vie for power over the film. Sets would be destroyed by a freak hurricane. Brando would refuse to arrive on set. The crew was in complete disarray not knowing what was going to be shot, when, where, or if anything was going to be shot on a day-to-day basis. With few supporters in his corner, Stanley was ultimately let go from his directorial duties and veteran director John Frankenheimer was brought in to salvage the already sinking ship. As history tells us, that didn't exactly work out well. With a final budget well over $40 million, the film managed to make back just $49 million in worldwide grosses. While not a complete financial disaster, it still stands as one of the worst films ever made (with one of the best Rifftrax commentaries), and it ultimately doomed Richard Stanley's Hollywood career.

With a one hundred minute run time, 'Lost Soul' could easily run an hour or two longer and remain just as captivating and engrossing. Sometimes a disaster can create a beautiful picture, and if the final product of Stanley's initial efforts is this film, then I'd say the man deserves a pat on the back. While Stanley clearly had bigger dreams and visions for his cinematic career that didn't involve his passion project turning into a complete hack job, this documentary proves that you can find gold in a manure pile. Along the lines of other "failed production films" like  'Jodorowsky's Dune' or 'Lost In La Mancha,' 'Lost Soul' charts a sympathetic path following the central "mad genius" of the entire production. Stanley was a man who was in the process of growing as a filmmaker and simply bit off more than he could chew. Had he started out smaller, practiced his craft a bit more on more medium-sized films with fewer egocentric actors, I think his vision for 'The Island of Dr. Moreau' could have become something beautiful. I am very reluctant to talk more about this film by David Gregory because it's just something to see and marvel at all of the artistic visionary efforts that went into this project that all turned to crap by little more than circumstance. This is at times a gut-wrenching film to watch as you really feel for Stanley and what he went through. I'm glad to see the man is still working, and still writing screenplays. He's the underdog filmmaker I want to see make it someday, if not on a big box office picture then at least on something he has a lot more control over.

'Lost Soul: The Doomed Journey of Richard Stanley's Island of Dr. Moreau' arrives on Blu-ray thanks to Severin Films. Pressed on a BD50 disc, the disc opens directly to the film's main menu. NOTE: There is a special edition version knows as the "House of Pain Edition" with an extra DVD offering additional extra features, as well as a CD featuring Stanley reading H.G. Wells' classic novel The Island of Dr. Moreau.

Because of multiple cameras and the extensive use of archival footage, 'Lost Soul: The Doomed Journey of Richard Stanley's Island of Dr. Moreau' has a generally inconsistent 1.78:1 1080p image quality. The primary issues at play here are some slight edge enhancement, image softness, a bit of banding and other compression troubles - but again that is largely because of the different types of cameras being used. The archival footage fairs the worst since most of it was shot on very dated mid 90s video technology. Over all for the modern interview segments featuring Stanley, the producers, the production designer, members of the crew and a couple of the actors, things look just fine and serve the film well with bright colors, and a nice sense of detail. It's hard to knock the image quality for a documentary of this type when there are so many uncontrollable variables at play.

'Lost Soul: The Doomed Journey of Richard Stanley's Island of Dr. Moreau' boasts a strong LPCM 2.0 audio track that does the film justice. Since the fast majority of the film takes place in closed offices or a person's home, the need for a full on surround track just isn't necessary. Because the film is mostly a person talking directly at the camera or over relevant footage of what they're talking about, this track gets the job done nicely. There is plenty of spacing for the scant few sound effects and the film's score that none of the elements ever interfere with what is being said. A fine track that does this documentary justice.

Richard Stanley: (HD 47:36) This is a massive chunk of interview footage of Writer/Director Richard Stanley, some of this does appear in the final film, but a lot of it is very new and fascinating to see how this guy's mind works and where he draws influences for his failed vision for the material as well as his other feature films.

Marco Hoschneider: (HD16:33) Some of this is old. A lot of this is new. All of this is fascinating.

Jim Sbardellati: (HD 5:45) The AD says a lot about the chaos of the production in just a very few minutes!

Graham "Grace" Walker: (HD 2:18) So much of his material made it into this final cut, this little tidbit is a nice side story.

Graham Humphreys: (HD 1:17) The artist shows off some more of his concept work of what the picture would have looked like.

Hugh & Ollie: (HD 1:19) These two were fun characters and here they talk about the first time they saw Brando on set.

Graham Humphreys Concept Gallery with Commentary By Richard Stanley: (HD 14:32) The artwork originally produced for this movie should have been collected and published in a book, because it's beautiful and fascinating.

Archive Moreau Interview with John Frankenheimer: (SD 6:02) Frankenheimer is very pointed and candid about about the film and its numerous troubles in this interview.

The Hunt for the Compound: (HD 6:18) Old crew members attempt to find the old sets, it's kind of a kick to see these guys take a stroll down memory lane for a project that sounded like absolute hell.

The Beast of Morbido: (HD 9:43) Richard Stanley goes to the Morbido Film Festival in full creature makeup, it's a goofy but fun feature to see him walk around town, take pictures with people, including kids!

Boar Man Diary: (HD 15:15) The Boar Man himself recites his on-set diary about his experiences shooting.

I remember going to see 'The Island of Dr. Moreau' in the theaters when I was 14. I'd heard of the film a lot and the creature effects looked cool, and it featured Val Kilmer and Marlon Brando, so how bad could it be? It didn't take long for me to realize even at that age, there was a reason people were talking about this movie - it was that bad. Now that we have 'Lost Soul: The Doomed Journey of Richard Stanley's Island of Dr. Moreau' we know why it was such a huge mess. This documentary is one of the most entertaining things I've seen in a good long while, and I love documentaries that don't pander while informing the viewer. With strong picture quality, a solid audio track, and a whole host of great extras, it doesn't take much effort to call this movie as being highly recommended. If you love movies and the process that goes into making a film, this is an absolute must see film.

Sale Price 18.64
List Price 34.95
Buy Now
3rd Party 18.99
In Stock.
See what people are saying about this story or others
See Comments in Forum
Previous Next
Pre-Orders
Tomorrow's latest releases