An astonishingly beautiful and gripping Western starring Viggo Mortensen, 'Jauja' (pronounced how-ha) begins in a remote outpost in Patagonia during the late 1800s. Captain Gunnar Dinesen has come from abroad with his fifteen year-old daughter to take an engineering job with the Argentine army. Being the only female in the area, Ingeborg creates quite a stir among the men. She falls in love with a young soldier, and one night they run away together. When Dinesen realizes what has happened, he decides to venture into enemy territory to find the young couple. Featuring a superb performance from Mortensen, 'Jauja' (the name suggests a fabled city of riches sought by European explorers) is the story of a man's desperate search for his daughter, a solitary quest that takes him to a place beyond time, where the past vanishes and the future has no meaning.

Sometimes a movie can be something we've all seen a dozen times before and yet find a way to feel unique and fresh. Whether it's a combination of casting, spoken language, time period, setting, or how a film is photographed - sometimes tweaking these elements can make an old story seem new. Directed and co-written by Lisandro Alonso and starring Viggo Mortensen, Viilbjørk Malling Agger, Ghita Nørby, and Adrián Fondari,'Jauja' is a movie that shakes up all four elements to create a surreal and oftentimes challenging film about a father searching for his missing daughter.

During late 1882, Captain Gunnar Dinesen (Viggo Mortensen) and his daughter Ingeborg (Viilbjørk Malling Agger) have traveled from their native Denmark to the far off land of Patagonia. As father and daughter explore this flat and untamed wildland, Gunnar's Lieutenant Pittaluga (Adrian Fondari) has steadily grown eyes for the beautiful young girl. As his stares linger far too long, Gunner and Ingeborg steadily become more and more uncomfortable with the man.

Part of Ingeborg's discomfort comes from the fact that she has feelings for another soldier in the company, a young man named Corto (Misael Saavedra). To save Ingeborg from Pittaluga, he tells Dinesen of a rumor of an army roaming the countryside dressed as women in order to surprise passing troops. Dinesen gives Corto permission to head out into the frontier in order to check things out and bring back proof. Taking the opportunity, Corto and Ingeborg run away into the unknown wilds together.

After discovering Ingeborg's departure and Corto's ruse, Dinesen heads out into the wilds ill-equipped for the journey. After finding a dying Corto - Dinesen learns that his daughter may have been taken by strange native peoples. As his journey extends into days and nights, Dinesen suffers from severe hunger and extreme dehydration. When the hallucinations begin to take hold of his mind, Dinesen can't separate reality from fantasy to the point that he may or may not have found his daughter.

'Jauja' is a bit of a difficult film to describe. This is in part due to its stylistic choices as the film's two spoken languages are Spanish and Danish, and is shot in the old silent era framing of 1.33:1. It's a hypnotic and intoxicating film to watch but for many it may be a test of patience. Part of the issues with this film is the pacing. For a film that has an urgent mission of finding a missing child, it likes to take its time. A lot of time in fact. As the film progresses it bucks modern convention where most movies would speed things up to a climax, this film actually slows down to a crawl. Making 'Jauja' possibly even stranger is a late third act time period change. Again, this is difficult to make much sense of as it becomes something that the audience will have to draw their own conclusions from. 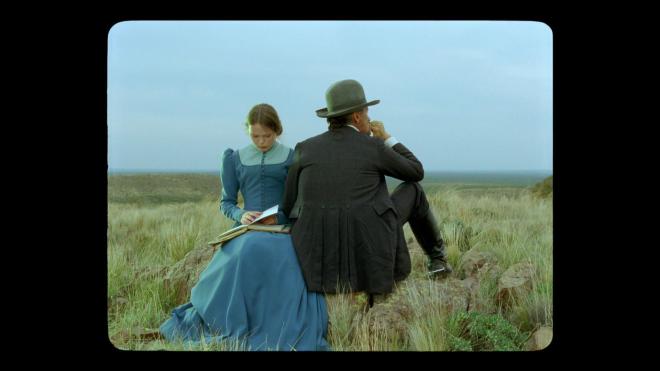 Performances are very strong all around, but this is absolutely Mortensen's show, as much of the film is centered around him traveling alone. Dinesen is a man that is driven to the brink of madness through the situation he is in as well as the environmental circumstances, and Mortensen absolutely nails it. It's a raw and visceral performance and it shows why he is one of the finest actors working today. Mortensen also contributed to the film's score and the music lends itself well to the hypnotic nature of the film - at least during a very specific sequence. Since the man was also a producer on the film, it's easy to call 'Jauja' a passion project for the actor.

'Jauja' is one of those films that it took me some time after viewing it to sort out my thoughts before I could begin writing about it. On one hand I was taken in completely by the artistic nature of the film, but on the other hand I was left feeling a little too disenfranchised by it. Part of this reaction comes from the very slow and deliberate pacing that follows through the second act. After a couple days of reflection and distance I can see the motivation behind it as for the character Dinesen, time has slowed to a crawl as he spends every available moment searching for his child. In an artistic sense this works wonderfully, as an aspect of storytelling, that's going to be up to the viewer to decide ultimately. While I get its employment, I had a tough time subscribing entirely with the pacing choice. When most audiences would want the film to go someplace it decides to virtually stand still and for some people that could be a risky proposition. As to how I recommend this movie to others, I would say if you're someone that has a hard time with a movie that bathes in imagery and nuance, this probably isn't the film for you. If you're someone that craves subtlety and wants their film to be a sort of metaphorical puzzle, you should be right at home with 'Jauja.'

'Jauja' arrives on Blu-ray Cinema Guild pressed onto a BD disc. Housed in a standard case with an insert essay by the Argentinian film critic Quintin.

Shot and presented in the academy ratio of 1.33:1, 'Jauja' is an absolutely beautiful looking film in this 1080p transfer. Given the framing and the sort of distanced look and feel of the film, it's difficult to judge this film without paying notice to artistic intention. Film grain has been retained and detail is very strong, the film's look often appears artificially sharpened making it look a bit crunchy as if some edge enhancement has been employed. Colors are the main fixture of this release as primaries have a beautiful pop to them. Greens, blues, and yellows have an amazingly strong presence. Black levels are richly inky and provide an impressive sense of depth. Every scene of the film has a sense of purpose letting 'Jauja' stand as a unique Blu-ray release.

'Jauja' comes packed with a subtle, but very resonate Danish/Spanish DTS-HD MA 5.1 track. At first it's hard to figure that this film is even using all that much of the surround track at all, but once you listen closely you'll hear the splendid wisps of wind and rustling reeds of grass throughout the run of the film. Like I said, very subtle but also serene and beautiful. Without much in the way of a score, the film's audio mix is largely made up of dialogue and sound effects. Each element has plenty of room to live and breathe and the mix never falters. Levels are just fine as you never struggle to hear what is being said and the film's subtitle track does a solid job of keeping pace with the mix of spoken languages.

Untitled (Letter To Serr): (HD 23:28) This short film serves as a sort of prequel to 'Jauja' It puts the main feature into some context as it gives a sort of introduction to the characters. Not entirely necessary to view in order to "get" the movie, but it doesn't hurt to watch either.

Untitled: (HD 1:15) another short single shot video of an Owl. It was intended as part of the marketing for the BAFIC Film Festival and is quite stunning to see. Short yes, but darn beautiful.

Press Conference: (HD 32:34) Taped at the 52nd New York Film Festival, Director Lisandro Alonso and Viggo Mortensen talk about the production of the film and if you were at all confused by the film, that's okay, it sounds like the two don't entirely understand it themselves as they worked to keep a lot of the elements intentionally vague.

Theatrical Trailer: (HD 1:57) A fine trailer that gives an idea of the languid pace of the film while also capturing some of the beautiful photography.

'Jauja' is a beautiful film that is likely only to appeal to a certain audience. Those willing to dip their toes into something a bit more experimental without provided-for conclusions should be happy as clams. Those looking for something a bit more conventional should consider a rental. That said, 'Jauja' is a beautiful film with a stunning video and audio presentation and a host of informative extras. I wound the film to be fascinating and this Blu-ray offers a wonderful presentation experience. Recommended for those ready and willing to think about what they're seeing on screen.

Sale Price 22.99
List Price 34.95
Buy Now
3rd Party 22.98
In Stock.
See what people are saying about this story or others
See Comments in Forum
Previous Next
Pre-Orders
Tomorrow's latest releases