In turn-of-the-century Mississippi, an 11-year-old boy comes of age as two mischievous adult friends talk him into sneaking the family car out for a trip to Memphis and a series of adventures.

The "coming of age" story can be one that is difficult to tell well. They tend to be about a small child or an adolescent who is on the verge of learning a very big adult life lesson. In order to tell a story like this in a meaningful way, the story must have an absolute sense of innocence. Even when the person doing the sudden growing up has that sense of innocence cracked, the story must maintain a perspective of purity - otherwise the main character ends up being just like the other adults and loses that indescribable importance that made them endearing in the first place. 1969's 'The Reivers' is an adaptation of the William Faulkner novel and is a nearly perfect coming of age story.

In 1905, the country was on the verge of a great change. With the railroad complete and connecting every part of the country - man's next dominance would be taming the rural roads of small towns and cities. In small town Mississippi, the future will arrive on the next train, but will roll away on four wheels under the power of a state-of-the-art high-powered gasoline engine. Lucius McCaslin (Mitch Vogel) is just like everyone else in town and is eagerly awaiting the arrival of his grandfather Boss' (Will Geer) automobile - the first of its kind - a bright and beautiful yellow Winton Flyer. As excited as Boss and the rest of the town are about the arrival of the first automobile, no one is quite as excited as Boss' hired hand Boon (Steve McQueen).

Day after day, Boon does what he can to care for the car, taking it to get washed, checking the oil, adding a new coat of polish - whatever he feels the car needs, he's going to provide. When a funeral takes Boss and Lucius' mother out of town for four days, that leaves the small boy in the care of the dedicated, but ever so slightly mischief-minded Boon. Boss has given strict orders that the Winton Flyer is to be kept locked up and Boon isn't to drive it around town - or anywhere else for that matter. But, when the cat is away, the mice will play, and Boon has some big plans for Lucius and himself.

The way Boon sees it, Lucius is about to become a man and will be expected to not only present himself like a man, but he'll also have to live up to the family name. Seeing that as a lot of pressure for anyone, Boon decides it's best that Lucius head out with him to Memphis for a good bit of slightly reckless fun. It is to be a grand adventure and by driving the Winton Flyer in and out, an all day journey will only take a couple of hours and they'd be back before they're missed. Once they take the car without permission, they became Reivers. Only like the best of strategies, things never go according to plan.

Boon's lifelong friend Ned (Rupert Crosse in an Oscar-nominated performance) managed to stowaway in the backseat of the Winton Flyer. With no choice but to take him along, the two men and man-to-be head out on the muddy, dirt covered roads towards Tennessee. It turns out Boon's sweetheart Corrie (Sharon Farrell) works at a brothel and that is their primary destination. At first everything is fine and dandy and the good-natured rabble-rousing trio is having a beast of a good time, that is until the racist ill-tempered Sheriff Lovemaiden (Clifton James) starts needling into their affairs. Things only get worse when Ned pawns off the Winton Flyer for a racehorse. Now with the law on their backs and the ownership of Boss' car in jeopardy, Lucius will get a firsthand look at adult life and the consequences that come from making bad decisions. 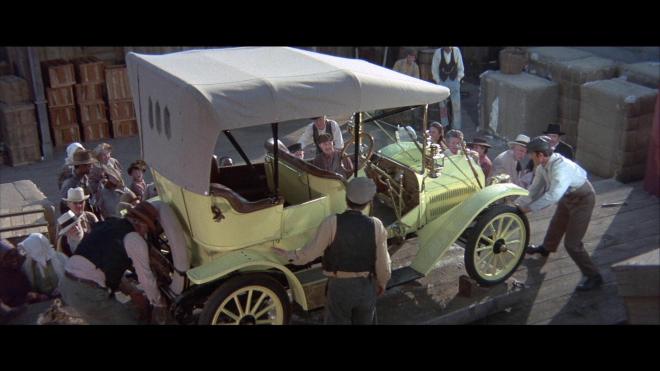 'The Reivers' is one of those movies that I would call an "absolute classic." From the beautiful cinematography by Richard Moore, to the fantastic casting - in particular McQueen as Boon, to the skillful adaptation of Faulker's novel by cowriters Harriet Frank Jr. and Irving Ravetch to the wonderful narration by Burgess Meredith to the assured direction by Mark Rydell, 'The Reivers' is a magnificent film. On top of the fine cast, writing and directing, the sweet and beautiful score from John Williams which shouldn't surprise anyone that it earned an Oscar nomination. Poignant without being pandering, silly without being absurd, the film is a joy from start to finish and stands as one of the few decent adaptations of Faulkner's work while also being a top quality film in its own right.

As I mentioned in my preface to this write-up, what I love about 'The Reivers' is its sense of innocence. From the time period that it takes place during, to its look at modern technology, to the characters who view the world through rose-colored glasses, this is a movie that celebrates the beautiful and ugly side of life. As we follow the journey of Lucius as a boy, we also hear from his older and wiser nostalgic voice. We see how and when Lucius becomes a man and his world-view changes and his loss of innocence, but we also watch as he attempts to hold onto his childhood - even as an older man recounts his fondest memories.

It feels like a rare thing when all of the best elements of a movie come together and fit perfectly. While I wouldn't exactly call 'The Reivers' a "perfect film," I will say that it gets pretty darn close. If I have one complaint is that the front end of the film is a bit heavy and it can take quite a while before Boon, Lucius, and Ned get on the road so to speak leaving the latter half of the film feeling a tad rushed. Just the same, the film is a wonderful piece of work and one that I enjoy revisiting every couple years. For the number of times that I've seen it, 'The Reivers' never loses its charm.

'The Reivers' makes its Blu-ray debut thanks to Kino Lorber and their Studio Classics line. The movie is pressed onto a Region A locked BD25 disc and is housed in a standard case.

For 'The Reivers' 2.35:1 1080p transfer it's a bit of a good news, bad news scenario. The bad news is that it appears that this is the same master that was used for the previous DVD release. The good news is that is perfectly okay as this is a fine looking transfer that makes a clean and crisp upgrade to high-definition with this Blu-ray release. Film grain has been nicely and subtly retained putting to rest any DNR worries and offering up some pleasing detail levels. Now, much of this movie is shot with an intentional dream-like haziness to it, so details can appear a bit soft every now and again, but all you have to do is look at the period costuming or Steve McQueen's curly mop of hair to see that this transfer is a clear upgrade over the previous DVD release. Color timing also appears to have been tweaked ever so slightly leading to a slightly warmer but more natural look giving the film a golden hue through much of the beginning half with accurate flesh tones. Black levels are very strong and offer a nice sense of depth at times, but when the movie shifts to the darker sides of Memphis, instances of crush start to creep in and can make some actors appear as floating heads. Even with the small quibbles aside, this is a strong catalogue transfer for a great movie.

'The Rivers' drives away with a beautifully resonant DTS-HD MA 2.0 stereo mix that brings about all of the best qualities of the film. From the sputtering engine of the Winton Flyer to the roar of the crowds at the race, the audio track never fails to deliver the goods. Dialogue is crisp and clear and appropriately center channeled while the sound effect elements and John Williams' amazing score have plenty of space of their own to occupy. Imaging is also a wonderful piece of work as there is just the right amount of channel movement to give the audio a pleasant life-like quality to it. I can't say how well a surround upgrade would have worked out, but just the same, this stereo mix is spot on. Without any age related anomalies, I'm left to give this track full marks.

Sadly, no supplemental material was provided for this release.

A good classic film is a valuable entry in any collection, and 'The Reivers' is a true classic. The film features a talented cast at the top of their game catering to a sweet story with a fantastic score by John Williams. Kino Lorber has done an incredible job with the video and audio presentation, but sadly there aren't any extra features of any kind making this a high-quality bare bones movie only release. That said, I'm still calling this Blu-ray as Highly recommended as it is such a wonderful movie and barring a complete restoration effort, this transfer will likely be the best we see this film on home video for the foreseeable future.

Sale Price 22.96
List Price 29.95
Buy Now
3rd Party 15.95
In Stock.
See what people are saying about this story or others
See Comments in Forum
Previous Next
Pre-Orders
Tomorrow's latest releases