Hildy Johnson, newspaper reporter, is engaged to Peggy Grant and planning to move to New York for a higher paying advertising job. The court press room is full of lame reporters who invent stories as much as write them. All are waiting to cover the hanging of Earl Williams. When Williams escapes from the inept Sheriff, Hildy seizes the opportunity by using his $260 honeymoon money to payoff an insider and get the scoop on the escape. However, Walter Burns, the Post's editor, is slow to repay Hildy back, hoping that he will stay on the story. Getting a major scoop looks possible when Hildy stumbles onto the bewildered escapee and hides him in a roll-top desk in the press room. Burns shows up to help. Can they keep Williams' whereabouts secret long enough to get the scoop, especially with the Sheriff and other reporters hovering around?

"Here, here! Get that copy of the Morning Post out of here!"

Often times the word "classic" is misapplied to a particular film. Since the definition of what constitutes a classic film is rather loose, the term can be tossed around rather broadly. Sometimes a film can be considered a classic because of the quality of its content - such as 'The Shawshank Redemption.' Other films can be judged as being a classic simply for being an older release. Even channels like Turner Classic Movies are starting to air films from the late 70s and early 80s and calling them "classics," which not only makes me question the definition, but also it makes me feel really old. But when you have a film like 1931's 'The Front Page,' that is a classic in every sense of the word, you don't have to worry about a definition, all you have to do is sit back and enjoy the film on screen.

It's tough being a reporter when there isn't a story breaking and you have an editor breathing down your back. As recently convicted murderer Earl Williams (George E. Stone) is awaiting his death sentence, the press pool is a stagnate air of cigar smoke and malarky as the reporters on duty sling out made up headlines and details just to appease their demanding editors that are hungry for good ink. All of this is true except for ace reporter Hildy Johnson (Pat O'Brien) who is recently engaged to the lovely Peggy Grant (Mary Brian) and is about to blow out of Chicago for a high paying adman gig in New York. Not even Hildy's manipulative and demanding editor Walter Burns (Adolphe Menjou) can keep Hildy on the job - or so Hildy believes.

With love in his eyes and a couple hundred bucks in his pocket to buy tickets to New York for his bride to be and her mother, Hildy is on his way out the door when the story of the decade lands right in his lap. Earl Williams has just busted out of the joint just moments before his hanging. Using his travel cash for a sharp lead, Hildy winds up being the only person who knows where Williams is. Since Williams has always maintained his innocence, Hildy has a chance to scoop the other news hounds that are on the man's trail and make off with a massive story that is worth a lot of dough. The only problem is Burns has other plans for the intrepid reporter as he aims to keep Hildy on his payroll, even if that means upending his reporter's plans for wedded bliss and the Manhattan high life.

Made in pre-code 1931, 'The Front Page' is a truly genuine classic comedy. Originally produced as a stage show in 1929, 'The Front Page' was later produced as a radio show in 1946 with O'Brian and Menjou reprising their roles as reporter and editor respectively. Then in 1940 the film was remade by Howard Hawks as 'His Girl Friday' starring Cary Grant which was then in turn performed as a radio program that same year and again in 1941. 'The Front Page' was then remade again for movie theaters in 1974 with Walter Matthau and Jack Lemmon and then again in 1988 as 'Switching Channels' with Burt Reynolds, Christopher Reeve, and Kathleen Turner. In 2003 'The Front Page' was brought back to the stage as part of a London production. It probably won't be very long before we hear of yet another film production as this story has proved over and over again that it's timeless. With nearly a dozen adaptations across multiple media formats, 'The Front Page' is one of those hysterical comedies that can easily be reimagined and reinterpreted for every generation. The format for news may change, but the story and satire of the news world is just as sharp today as it was in 1931. 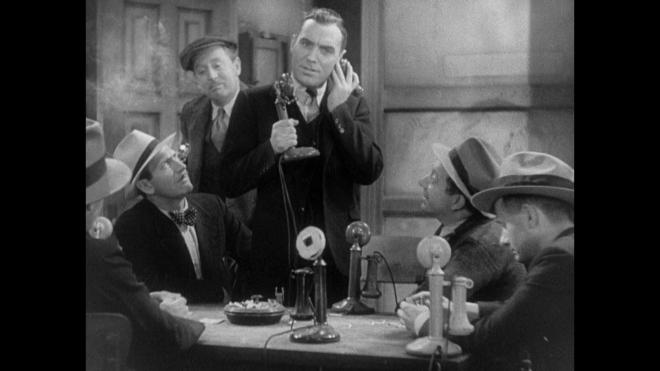 Nominated for three Academy Awards for Best Picture, Best Actor Adolphe Menjou, and Best Director Lewis Milestone, 'The Front Page' was added to the National Film Registry by The Library Of Congress in 2010. Amazingly enough, this film was added after 'His Girl Friday!' As a film, I find 'The Front Page' to be one of those ageless comedies that never ceases to be entertaining. From the sharp banter to the addictive characters to the satirical storyline involving complacent newsmen, the movie is a delight from start to finish. On top of the fantastic writing by Bartlett Cormack from the stage show by Ben Hecht and Charles MacArthur and the loose and playful direction from Lewis Milestone, you have the amazing cast of Adolphe Menjou, Pat O'Brien, Mary Brian, and the always entertaining Edward Everett Horton as the germaphobic Bensinger toplining a cast of memorable and hilarious characters.

While just about every adaptation of this film has something of value and is worth a watch in its own right, it's difficult to watch those versions and not come back to the original film production of 'The Front Page.' It's just one of those movies you can't help but enjoy. While TCM runs this film a couple times a year, being able to see the film restored to its best possible presentation is a real treat. It's also nice knowing that since 'The Front Page' will now be preserved by The Library Of Congress it will now be available for future generations to enjoy. If you've yet to see this version, you owe it to yourself to give it a spin sometime soon.

'The Front Page' makes its Blu-ray debut thanks to Kino Lorber and is pressed on a BD25 disc. Housed in a standard case, the disc opens to the main menu.

Struck from 35mm preservation elements, 'The Front Page' has never looked better. That isn't to say that this 1.33:1 1080p transfer is exactly in mint condition, but it probably is in the best shape it's ever looked on any home video format. Given its age, there is a forgivable amount of speckling and a few scratches throughout with some haziness and softness in some shots, but those age-related bits of wear and tear hardly diminish this impressive transfer. For starters, since film grain has been retained, the detail levels of the film are incredibly impressive. Every one of the newsmen in the bullpen sports their own unique characteristics and style and the added detail really helps bring that added bit of personality to the forefront. Black levels are strong for the most part and only falter when some replacement elements of a different source condition are employed. The only way this film could possibly look any better is through some kind of extensive restoration effort - and since this film is part of the National Film Registry, that could well be a possibility. As it stands, this Blu-ray transfer is fantastic - especially when you consider that this film is coming up on its 85th birthday next year.

With a fairly strong LPCM 2.0 Mono track 'The Front Page' shows the unfortunate side effects of age and improper storage. With only mild hiss and popping, the audio track is for the most part very strong as much of the dialogue can be clearly heard and sound effects like the hangman's test bag have some impressive resonance. The problem for this track is that levels are about as strong as they can get without some extensive audio restoration work. Where the dialogue can be clearly heard through a particular scene, the next cut can lead to a sudden and dramatic drop off to the point where the person speaking can hardly be heard. This isn't so problematic as to say you can't hear what someone is saying, but it does require you to be vigilant and be ready to adjust the volume accordingly. Overall the track is very good, it's just those moments where things dip and become difficult to hear that keeps this audio track's score from earning higher marks.

Audio Commentary: Film Historian Bret Wood provides a solid commentary track that goes through the history of the production, adaptation differences from stage to screen, and provides a number of fun anecdotes.

The Front Page Radio Adaptation - 1937: (60:00) Hosted by Cecil B. Demille and featuring James Gleeson and Walter Winchell, this is a fun radio play. It's interesting to hear how the story was reworked for this format and the results are just as effective.

The Front Page Radio Adaptation - 1946: (32:00) This is the second radio play featuring Adolphe Menjou and Pat O'Brien in reprising their roles. Maybe not quite as good as the longer radio version under Cecil B. Demille, but still a good bit of fun.

Library Of Congress Mini Documentary: (HD 7:16) A brief but very interesting look at what goes into preserving such a massive collection of film and video.

'The Front Page' is one of those great movies that stands the test of time. Even its remakes have something to offer by bringing their own unique flavors to the material. With a great cast and a razor sharp script, the film is a joy from start to finish, and is a genuine classic. With a strong transfer, 'The Front Page' looks amazing on Blu-ray but sadly age has taken a bit of a toll on the audio quality. Thankfully there are some solid extras to make this disc from Kino Lorber a worthy addition to any collection. Easily recommended.

Sale Price 21.64
Buy Now
3rd Party 14.99
In Stock.
See what people are saying about this story or others
See Comments in Forum
Previous Next
Pre-Orders
Tomorrow's latest releases