Buddy's Musical Christmas tells the story of Buddy the elf, and his quest to reunite with the human father he never knew existed. While Buddy's sincerity and idealism are commonplace at the North Pole, these attributes are rejected in cynical New York City. But through song, dance, and relentless good cheer, Buddy rekindles the spirit of Christmas for the entire city.

Holiday specials are nothing new, they've been around since television was a piece of furniture everyone in America sat around and stared at in the evenings. Some of these Christmas and holiday themed outings have become instant classics and withstood the test of time. Others like the 'Star Wars Holiday Special' for example, have gone on to become legendary misfires that are laughed at and ridiculed and have disappeared into myth. Then you have something like 'Elf: Buddy's Musical Christmas' that begs you to ask why it was made in the first place.

If you've seen and know the Jon Favreau directed 2003 film 'Elf' then you already know everything there is to know about 'Elf: Buddy's Musical Christmas.' Beyond recasting everyone other than Ed Asner as Santa, this 44-minute long holiday special is virtually the same story all over again - only in stop motion animation. From Buddy learning that he's not really an elf and is in fact human to his traveling to New York City to Meeting Jovie to spreading holiday cheer - this is the same movie with only some slight subtle changes and a lot more singing.

If the only difference is the fact that this new 'Elf' is a musical is the only real change, it begs one to ask why was the film remade at all? My only guess to that point is that this version of the movie is a bit more kids and family friendly. No belching, no flatulence, no eating already chewed gum off the street. If you were a parent who had a tough time letting your child enjoy those fleeting moments in the original film, you should be okay for this new version. 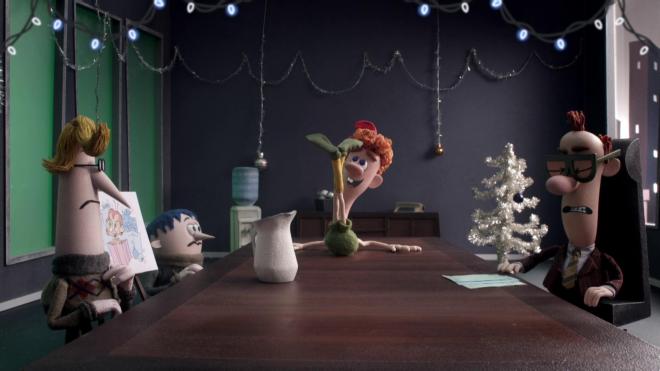 I'll give all credit to the voice cast consisting of Jim Parsons as Buddy, Mark Hamill as his father Walter, Kate Micucci as Jovie, and Gilbert Gottfried as Mr. Greenway. They're clearly giving it their all and trying to make the most of this limited production, but when this version of the story is half as long as the original, there's just not enough time to actually build any real character here. It feels like every plot beat in the original movie is given a song and then animated in stop motion. While I dug the puppets and how well they're animated, it's also very difficult not to feel the retracted scale of this endeavor. Part of me wishes that this short had gone on and replicated the stop-motion animation style of the 1964 Rudolph the Red-Nosed Reindeer special from 1964. It would have worked well and fit those few moments from the original film.

'Elf: Buddy's Musical Christmas' isn't the best thing to come along, nor is it the worst. As a Christmas special, it's just unnecessary. At this point, if you're a fan of 'Elf,' you probably watch it every year just as the holidays start to inch closer and closer. 'Elf: Buddy's Musical Christmas' doesn't live up to that film's level of magic nor does it have any chance of replacing that film - unless as I mentioned previously you weren't a fan of the film's subtler charms. Had this special gone and went the sequel rout, I could have forgiven it and possibly enjoyed it. Beyond the opening Santa song, most of this show's musical numbers are pretty irritating and don't really give you much value when you consider they're shoved into a story you've already seen and enjoyed without them.

'Elf: Buddy's Musical Christmas' arrives on Blu-ray courtesy of Warner Brothers and is pressed onto a BD25 disc. Housed in a two-disc eco-friendly case with identical slip cover, the Blu-ray also comes with a DVD copy of the short as well as an HD Ultraviolet digital copy code. After some trailers for a couple new Lego releases and a new Scooby Doo adventure, the disc arrives at the main menu.

If there is one thing that I really enjoyed seeing in 'Elf: Buddy's Musical Christmas' were the show's stop motion puppets. With this 1.78:1 1080p transfer, you can see all of the wonderful details in the armatures that give these characters some real life. There is also a pleasing level of three-dimensional depth to the image that helps the puppets feel even more present and lifelike. Colors are bright and beautiful skewing to the cooler holiday spectrums allowing for greens and reds to have plenty of pop against icy-cool white/bluish backgrounds. Black levels are solid all around. While it may not be the most intricately designed production out there, this image shows off all of the show's finer features to great effect.

If you love the songs belted out through 'Elf: Buddy's Musical Christmas' you and your little ones should be very happy with the DTS-HD MA 5.1 audio track found on this disc. As an animated feature, there are constant noise and sound effects to keep the short moving and therefore, your surround channels engaging. This is a bit of a double-edged sword, however. While most of the dialogue and the actors' voices come through with great clarity, when some of the action picks up it can be a bit difficult to hear what they're saying or singing in some scenes. But that's the only real knock I have against this mix.

Elf-in' All The Way: Inside Buddy's Recording Sessions: (HD 5:20) A brief but fun look at what went into the production of the feature and how the casting process brought the actors together. Mark Hamill looks like he's having a great time.

If you really loved 'Elf' and want to see it remade as a stop-motion holiday special then you should love 'Elf: Buddy's Musical Christmas.' It's a cleaned up version of the film and is more kid friendly to the point that adults may not enjoy the experience - unless you absolutely love stop motion animation. Warner Brothers has brought this special to Blu-ray in fine form with a rock solid A/V presentation. Extra features are virtually nonexistent beyond a short five-minute making of special. It's a rent first to see if you and your little ones like it. If not, then you still have the original 'Elf' to watch!

Sale Price 11.49
List Price 19.98
Buy Now
3rd Party 2.49
In Stock.
See what people are saying about this story or others
See Comments in Forum
Previous Next
Pre-Orders
Tomorrow's latest releases