House of the Long Shadows

An American writer goes to a remote Welsh manor on a $20,000 bet: can he write a classic novel like "Wuthering Heights" in twenty-four hours? Upon his arrival, however, the writer discovers that the manor, thought empty, actually has several, rather odd, inhabitants.

In 'House of the Long Shadows,' Desi Arnaz, Jr. — that's right, the son of famed music entertainer Desi Arnaz and legendary comedienne Lucille Ball — stars as cocky American Kenneth Magee, a naïve young writer still looking for his big break. Within minutes of his arrival in England to meet with his publisher (Richard Todd), Mr. Magee exudes an air of self-importance and pretentiousness, batting eyes with a lovely blonde stranger at a restaurant with whom he crudely admits he'd much prefer to sleep with than romance. Arnaz, whose only other notable performances are in 'Billy Two Hats' and 'The Mambo Kings' where he plays his father, is surprisingly good in the role, revealing a talent for making the character unappealing yet likeable enough for audiences to want to see the guy's conceited pride taken down a peg. That opportunity arises during the meeting where the height of his arrogance is laid bare and serves as the plot's catalyst. Magee boldly bets $20,000 that he can churn out a horror novel that rivals Wuthering Heights, if not surpass it, in one single night.

The publisher arranges for Magee to spend the night at a deserted Welsh estate known as Baldpate Manor so that he can write through the entire twenty-four hours without interruption. Conveniently, the mansion has been abandoned for the last forty years, which in cheesy, low-budget B-horror terms means a large stately house decorated in cobwebs, adorned with creepy statues and oil paintings, everything swathed in dust, inhabited by random, unexplained creaking noises, antiquated furniture draped in white sheets, and fittingly lacking modern conveniences such as electricity. It is the perfect setting for any aspiring young writer to lock themselves in isolation and from which to draw inspiration for creating the next horror masterpiece. Admittedly, the manse provides just the right amount of spookiness and the unadulterated gothic atmosphere that's reminiscent of classic Hammer and AIP films, which is one of the production's stronger and best features. Director Pete Walker takes full advantage of the location, imbuing an otherwise humdrum tale with an eerie feel. 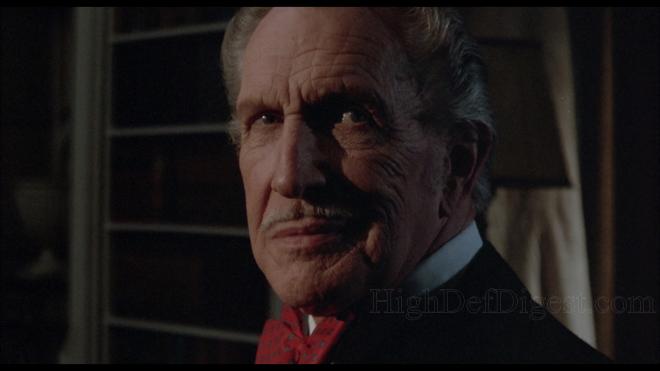 It doesn't take long before strange happenings begin disturbing Magee's hubris writing project, starting with John Carradine and Sheila Keith as Elijah and Victoria claiming to be the estate's caretakers, but their oddball behavior and sneering stares, of course, leave a different impression. This is quickly followed by the same blonde from the restaurant, named Mary Norton (Julie Peasgood), dressed as an old, disheveled hag straight out of Snow White. But instead of offering poisoned apples for our would-be prince trapped in a dark, ominous castle, she comes bearing more suspicions, a potential love interest and the damsel in distress trope that finally sets the plot into motion. However, the movie only really becomes exciting when Peter Cushing, Vincent Price and Christopher Lee make an appearance in that order, with each given a magnificent, deliciously sinister entrance that bestows them with the sort of reverence they deserve. With Magee now effectively sidetracked, the unannounced shindig turns into a murder mystery dinner when the house's history and secrets are slowly revealed and the uninvited guests start dying.

Inspired by Earl Derr Biggers's 1913 novel Seven Keys to Baldpate, Pete Walker's 'House of the Long Shadows' is best remembered as the one and only film in which the three horror legends Price, Lee and Cushing starred in the same production and appeared on screen at the same. And seeing the celebrated, dearly beloved actors together, playing off each other with superb rhythm and humor is a stupendous treat. That alone is reason enough to watch, although the ending leaves a very sour note to all the devilish fun preceding it. But for cult enthusiasts, the production is also remembered for being a pet project of Yoram Globus and Menahem Golan, the two infamous Israeli filmmakers who owned The Cannon Group in the 1980s. The script was written by Michael Armstrong, writer and director of cult classics 'Mark of the Devil' and 'The Haunted House of Horror,' a very early predecessor of the "slasher" film formula. In spite of the main character's dismissiveness of Emily Brontë's literary masterpiece, Armstrong's tale enjoys a Wuthering Heights type of vibe and eeriness that makes Walker's film a fun and memorable footnote in the careers of several cinema legends.

Kino Lorber brings 'House of the Long Shadows' to Blu-ray on a Region A locked, BD25 disc inside the standard blue keepcase. At startup, viewers are taken directly to a static main menu with music.

The kooky cult favorite casts a very long shadow on Blu-ray with a strong yet run-of-the-mill 1080p/AVC MPEG-4 encode. On a positive note, the source appears to be in great condition with only a few instances of white specks and dirt sporadically popping up; however, much of the picture shows that noticeable yellowish hue that only comes with age. Nevertheless, the 1.85:1 image arrives with a good deal of definition, showing distinct lines in various objects and furniture throughout the creepy manor.

Only, the presentation is somewhat inconsistent, looking pretty soft and blurry in several sequences where grain can seem a tad thicker than normal. Although whites are clean and decent, contrast is fairly average, making for a slightly dull and flat presentation. This visibly affects black levels, making shadows appear murky and cloudy with passable delineation, and colors are largely lackluster with only the primaries offering any indication of a high-def transfer.

Unfortunately, the creaky house welcomes listeners with a DTS-HD MA mono soundtrack that's on par with the video: mostly passable but nonetheless prosaic and lifeless. Although vocals are intelligible and plainly audible in the center, voices seem distant and detached while not always matching the movement of actors' lips.

Lacking a sense of presence, imaging feels very narrow and limited in spite of many discrete background effects and the heavy wood-string score, broadening the soundfield if only somewhat. For the most part, the mid-range is clean, but it doesn't exhibit much distinct detailing between the various frequencies, failing to make much of the action, or the movie as a whole frankly, very engaging. There's really nothing in the way of bass either, which sadly adds to the film's overall lackluster presentation.

Inspired by Earl Derr Biggers's 1913 novel Seven Keys to Baldpate, Pete Walker's 'House of the Long Shadows' is best remembered as the only film in which the three horror legends Vincent Price, Christopher Lee and Peter Cushing starred and appeared in the same production. Also starring Desi Arnaz, Jr. and from a script by Michael Armstrong, the sly horror comedy should also be enjoyed for its amusing celebration of B-movie pictures that relied more on atmosphere than gore and jump scares. The Blu-ray arrives with a mostly average audio and video presentation that still yields a welcomed upgrade to previous home video editions, and although supplements are rather meager, the overall package is sure to please cult collectors.

Sale Price 16.64
List Price 29.95
Buy Now
3rd Party 16.64
In Stock.
See what people are saying about this story or others
See Comments in Forum
Previous Next
Pre-Orders
Tomorrow's latest releases