A commando unit is dropped behind the German lines in Italy and its mission is to blow up a strategic dam. However, the unit is ambushed and only its leader survives. He is picked up by a ragtag group of local youths, who strike a bargain with him--they will help him blow the dam if he will help them get revenge on the Germans, who have taken over their village and killed their parents.

Exploitation-style war movies are a bit of a risky endeavor. With this style of action cinema storytelling, you can run the risk of alienating and offending audiences and in particular veterans, but at the same time you can provide a cathartic release. Like John Rambo single-handedly destroying the Vietnamese army in 'Rambo: First Blood Part II' or in Enzo Castellari's 'The Inglorious Bastards,' or even Tarantino's 'Inglourious Basterds' - these movies offer a fantasy of war where the bad guys are punished and the good guys resoundingly win the day. Phil Karlson's 'Hornets' Nest' starring Rock Hudson and Sylvia Koscina certainly falls into this fantasy war category where a lone G.I. leads a band of orphaned Italian children to destroy a dam and wipe out an entire Nazi army battalion.

After an entire squad of U.S. soldiers is gunned down as they parachute into a remote part of Italy, the lone survivor named Turner (Rock Hudson) is left to complete their secret mission alone. He only survived because his chute opened late and he was swept into some trees. After hitting his head on a branch and being knocked unconscious, Turner is rescued by a band of orphaned Italian children lead by a teenage boy named Aldo (Mark Colleano). The children manage to get Turner's gear and drag him off to a nearby cave where they've set up their own underground resistance force. These children's parents were murdered by Nazis and they're out for revenge - but if they're going to have vengeance, they're going to need Turner to train them.

With Turner unconscious and wounded, Aldo and the rest of the children kidnap the local German nurse Bianca (Sylva Koscina). Bianca is essentially their prisoner as she is forced to care for Turner, but can't be trusted to leave when the job is done. As Turner comes around and his wounds heal, he learns the full severity of his mission. With only a band of untrained children, Turner must complete his mission to destroy a remotely located dam before the allied forces arrive. If he fails, the German army could wipe out the advancing forces and effectively win the war. But if the children are going to help the American, they have a few conditions of their own.

Since Aldo and the boys have been stockpiling weapons for months, they have plenty of guns and ammo, but no idea how to use them. Not only is Turner going to have to train these boys, but he'll also have to lead them on a raid to kill the Nazi command that took over their village. With his equipment held hostage, Turner must do what the children demand while also having to worry about Bianca's loyalties. Is she really there to care for the children? Or is she waiting for the right opportunity to give away their position? Added to Turner's woes is the doggedly persistent Captain Von Hecht (Sergio Fantoni) who has smelled out the American's true target and is hell bent on ensuring that the dam remains intact. 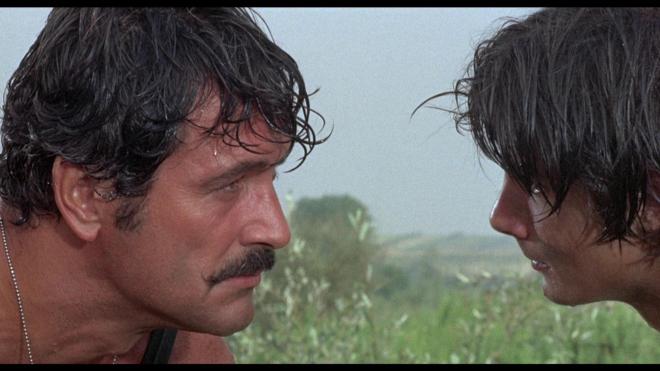 'Hornets' Nest' is one of those odd duck war films. It's a rousing action thriller for the most part and provides a solid two hours of entertainment. On the other hand, it also tries to be a film that "says something" about the nature of war. As Turner trains the children for war, he's also feeding Aldo's maniacal desire for revenge in the process potentially creating another mad murderer. It's an interesting dynamic and I appreciate that the film tries to offer a message, especially given it's timing of release during the Vietnam War, but after a time Aldo's antics became a bit over-the-top to the point of becoming comical. As a straight forward war fantasy, it delivers the goods and the final battle sequence is amazing. As a message movie, it's a bit hammy and doesn't quite do the material justice. Best to watch this one strictly in the sense of an exploitation war flick.

Performances all around are pretty good. Rock Hudson sporting his trademark 70s mustache for the first time does a solid job with what he's given to do. He's an imposing, physical actor that brings a lot of weight to the role of an exhausted and morally conflicted man. Equally impressive is the young Mark Colleano as Aldo. While he may yell all of his lines and spit every now and again, the anger and rage he brings the character is believable. Sergio Fantoni delivers another fun performance as Von Hect and really helps round out the cast in a big way. However, Sylva Koscina as Bianca is a bit of a sticking point for me, not for the quality of the woman's performance as a concerned motherly character, but with how she's treated throughout the film. Constantly denigrated and belittled, anytime she shows any sign of disobedience or obstinance over the care of the children she's slapped, nearly raped, and frequently has her clothes ripped or torn leaving her in shambles. For a character that is supposed to be the empathetic one, someone who changes their thinking through the course of the film's events, she's treated like crap. I get it, this level of sexism was prevalent in the 1940s and very common in 1970s cinema, but at the same time, 45 years later after this film's release, it's more than a bit uncomfortable to watch. These moments may be brief, but they're there.

All around I found 'Hornets' Nest' to be a decent war action thriller. There are some story issues and characterizations I wish had been handled a bit cleaner, but as a source of entertainment, the movie certainly delivers. I wanted to see what lengths Turner would go to in order to complete his mission. I was frighted to see Aldo's bloodlust grow and worried for the inevitable climactic confrontation with Turner. Watching Sergio Fantoni crib Paul Scofield's Von Waldheim from 'The Train' was a blast. Perhaps the best part of 'Hornets' Nest' was the somber yet thrilling score from Ennio Morricone. Anytime that man's music comes on I instantly have a smile stitch across my face. If you've never seen 'Hornets' Nest' it's a fun flick and is worth a watch.

'Hornets' Nest' arrives on Blu-ray thanks to Kino Lorber and their Studio Classics line of films. Pressed onto a BD25 disc and housed in a standard case, the disc opens directly to a static main menu.

Age seems to work in 'Hornets' Nest' favor as this 1.85:1 1080p transfer is very impressive. With only slight edge enhancement and some late third act print wear knocking this release down, the film makes an impressive transition to high definition. With fine film grain intact, detail levels are immaculate. Every hair of Hudson's amazing 70s stache is clearly and cleanly visible. The rolling terrain, the wooded areas and the Italian landscape and local architecture look fantastic. Colors are bright and have plenty of pop to them, especially greens. A few inconsistencies hit when the film shifts to some day-for-night photography, but that's not really a fault of the transfer. Overall, I'd say Black Levels are pretty good, the image during the daylight sequences offer up a lot of depth to the image, but night shots are a bit crushed in places and some contrast boosting here and there can have a flattening effect on the image. For a catalogue release, this is still an impressive transfer with a lot to see and appreciate.

'Hornets' Nest' comes packed with a rich and resonate DTS-HD 2.0 audio track that really brings the film home. There are plenty of added ambient and atmospheric effects throughout to give the track a real presence. Dialogue is crystal clear and easily heard, even during the film's major climactic action sequence. Gunfire has that wonderfully exaggerated quality to it and explosions do a great job of kicking the low towns. Most of the film keeps to the midranges without any severe spikes or drop offs and levels are nicely equalized so you shouldn't have to ride your volume button. Imaging is a bit flat, there really isn't much in the way of channel movement but at the same time the track still works for this type of movie.

Hornet's Nest Trailer: (HD 2:39) A Solid trailer that sets the move up as some sort of version of 'The Dirty Dozen' starring kids.

The Train Trailer: (SD 4:35) This trailer is in really rough shape, but it makes me want to pull out my Blu-ray of it and watch it again, so I guess it works!

The Secret Invasion Trailer: (HD 3:11) I love the trailer for this Roger Corman gem.

'Hornets' Nest' is a solid bit of wartime action fun. Verging on becoming an exploitation film, the action is swift and the idea of children soldiers killing Nazis is a real kick. It's not a perfect movie by any stretch, but it's pretty good and very entertaining. Kino Lorber has done a solid job putting this Blu-ray together with an impressive transfer and a rock solid audio presentation. Extras are skimpy, but just the same, I'm calling this worth a look. Some may love it, others might not be taken in by it.

Sale Price 19.96
List Price 29.95
Buy Now
3rd Party 19.96
In Stock.
See what people are saying about this story or others
See Comments in Forum
Previous Next
Pre-Orders
Tomorrow's latest releases