In this pulse-pounding actioner, an ex-hitman (martial arts master Marko Zaror) seeks redemption for his sins by meting out violent justice to those who would prey on the innocent. Known on the streets as the Redeemer, Pardo is a vigilante desperate for redemption and earns it by offering criminals the chance to ask forgiveness for their crimes or pay the ultimate price. When his bloody path crosses that of would-be drug lord Braddock (Noah Segan, Looper, Deadgirl), he must fight an entire underworld organization while keeping one step ahead of a vengeful assassin seeking to undo his virtuous work.

Quotes from critics are a common method for helping to market a movie, after all, positive word of mouth pays off in spades in this world of social media. When a movie gets some good reviews by a critic a blurb or a snippet makes for a nice accent piece for the movie's poster or home video cover. In the case of martial arts action-fest 'Redeemer' Twitch movie critic Ryan Aldrich gives this anecdote: "An all-out video game-esque cavalcade of violence." This quote is a near-perfect description of what amounts to be an at times fun yet tedious action movie.

For Pardo (Marko Zaror) putting his past as a killer-for-hire behind him has been physically, spiritually, and emotionally difficult. In an effort to move on and save his soul from eternal damnation, Pardo dons a hoodie and becomes known as the Redeemer throughout the Chilean underworld. The Redeemer is a brutal killer who brings evil men to true justice. When he learns of a victim in need, he answers God's call by blessing himself with a loaded revolver aimed at his own head. If the bullet doesn't fire, then God has blessed his mission. If the bullet were to fire, well, then we wouldn't really have much of a movie left to watch.

After helping a couple of locals, Redeemer is firmly in the sights of American wannabe drug lord Bradock (Noah Segan). While Bradock absolutely wants his money back, he's also a bit more preoccupied with the concept of the legendary names that are bandied about by his gang. Not only is Redeemer a cool name, but so is the one given to another legendary figure of the underworld, Scorpion (José Luís Mósca). If Bradock is going to rule the Chilean drug industry, he want's a cool name of his own. While Bradock thinks all of this is fun, he's unaware of the great amount of trouble he's in with both Redeemer and Scorpion in town picking off his minions one by one. As Redeemer gets closer to his goal and keeping the innocent people safe, he's going to come face to face with a man from the very past he's trying to run away from. Survival has always been secondary to his goal for ultimate redemption in the eyes of God, but not even the big guy upstairs can keep Redeemer from facing his past. 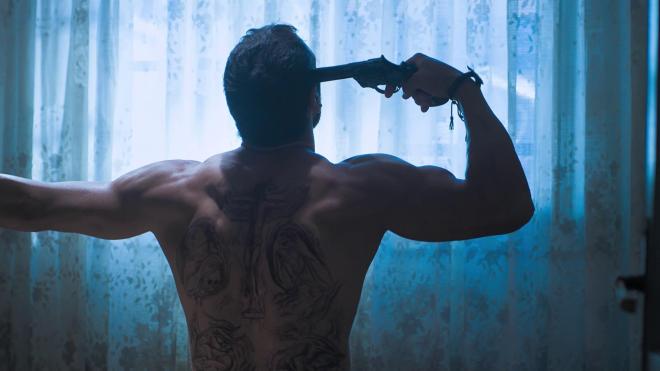 'Redeemer' starts out as an earnest but goofy violent bit of martial arts fun. Marko Zaror is clearly a talented athlete and this film works to be the perfect showcase for the man's abilities. Unfortunately with the paper-thin plot, the movie winds up feeling like a prolonged YouTube showcase video. At first the fight sequences are swift, brutal, and inventive. Zaror as Redeemer is capable of dodging bullets and knives while breaking legs, noses, and arms with his fists and legs. He even runs a guy's face through an outboard motor to grizzly glorious delight! But then the plot tries to kick into gear the movie really never gets out of neutral. 'Redeemer' is a movie that takes its story structure from modern video games. A fight level is completed then we get a cut scene that expands the thin story setting up the next big fight sequence including level boss battles where each opponent becomes harder for Redeemer to kill. Rinse, wash, repeat for 90 minutes.

Noah Segan's Bradock is a goofy and hilarious wanna be bad guy. He may look and sound inexperienced or like he's in over his head, but as he regularly proves, he's well ahead of the game. The innocent idiot is in part a facade making him a pretty solid villain. Unfortunately, he's not in the movie nearly enough, nor is he the primary villain. It's a shame, while I didn't expect a full on martial arts brawl between Bradock and Redeemer, it would have been cool to see them face off, if only for Redeemer to slap the guy around a little.

I started out absolutely loving the gnarly gory fight scenes that 'Redeemer' opens with, but by the half-way mark, I was getting really tired with them. While there are nice little character moments peppered throughout and the bits of backstory we're given for Redeemer work, it's almost too much story - if that can actually be a problem? The point I am cryptically attempting to get to since I am trying to avoid spoilers is that the movie doesn't need to come full circle in the way that it does. Think of the Eastwood westerns like 'The Man With No Name Trilogy' or even 'High Plaines Drifter.' These are movies with a violent anti-hero who doesn't have a real name but has a shady history to give him a defining edge. We don't really need his backstory to get in line with his mission or his immediate goal even though the two may slightly interconnect. Had 'Redeemer' taken that approach, I think the movie would have turned out a whole lot better. And, as much as it pains me to say, the action scenes could have also used a bit of trimming. They're extremely well executed, but when the camera holds for too long, it becomes painfully clear that the actors involved are throwing their punches and kicks.

If you're an out and out diehard fan of the Martial Arts genre, you should have a blast with Redeemer in spite of the thin story. Chances are you're here to watch one guy beat another guy to death with his fists and feet. To that effect, 'Redeemer' delivers the goods. If you're here for a rich story with engrossing relatable characters, 'Redeemer' is not that movie. It's good for some fun, but I can't say how well 'Redeemer' will hold up to repeated viewings.

'Redeemer' makes it's Blu-ray debut thanks to Dark Sky Films and is pressed onto a BD25 disc. Housed in a standard case, the film opens to an animated main menu. Note: The default audio setting is the English dubbed Dolby Digital 2.0 audio track. If you don't like tin canned dubbing, the Spanish DTS-HD MA 5.1 should fit the bill.

'Redeemer' presents itself with an often beautiful yet frequently frustrating 1.78:1 1080p presentation. Let's do things reverse alphabetical and start with the good news. Color is absolutely rich and vibrant with plenty of primary pop. Especially the colors yellow and blue. These colors have been artificially pushed for the film for dramatic effect and really help set the tone of the flick. Thankfully this blue push has been marginalized since it doesn't appear to alter flesh tones to any ill effect. Black levels are for the most part very strong throughout the film offering a wonderful sense of depth to the image. Detail levels are also very good - when the camera isn't setting up for an action sequence.

That's where the bad news comes in. The image, at least in my viewing, is very inconsistent scene to scene. Where the quiet dramatic moments or the funny scenes with Bradock and his men look absolutely flawless, action scenes, on the other hand, look soft and smeary. This goes beyond motion blur in some cases to the point that the movie was shot on a top quality industry set up and then was suddenly shot on an early model sports camera. Had the entire movie looked that way, that would have been one thing, it's when we get some brilliant flourishes that I can't help shake how much better the movie could look. While not a fault of the transfer per se, it is a distracting effect and one I can't really ignore.

When viewing 'Redeemer' make sure you visit the audio menu before starting the film and select the Spanish DTS-HD MA 5.1 audio track. The auto-selected  English Dolby 2.0 track is a tinny, hollow nightmare in my opinion. I've never been a big fan of dubbing and this is possibly one of the worst efforts to that end. The language accuracy is not really being the problem but rather how lifeless the movie sounds dubbed really kills it. By contrast, the Spanish DTS-HD MA 5.1 track is absolutely beautiful. Given the tonal changes from soft introspective moments to thundering action beats, this track is constantly alive and engages the surround channels almost nonstop. If there isn't a punch, scream, or gunshot filling out the channels, then there is plenty of ambient and background noise with an absolutely fantastic action synth score by Claudio Rocco. Levels are nicely balanced so you won't have to monitor your volume output when things heat up, nor should you have to adjust it when things get quieter. Dialogue is crisp and clean and never difficult to hear and the film's English subtitle track does a solid job of keeping up with the movie without simplifying what is being said. All around a strong audio track that works really well for the film.

Making Of: (HD 5:27) A very, very brief look at the making of the movie. It's actually impressive to see how much material they cover in just over five minutes, but sadly it doesn't go into much depth. Some more features like this would have been fantastic.

Deleted Scenes: (HD 7:22) All around your typical deleted scenes collection. It's clear to see why these never made it into the final film.

Trailer: (HD 1:36) It's a good trailer, but at the same time, woof! It's riddled with spoilers so if you want to be at all surprised by 'Redeemer' - skip this trailer.

'Redeemer' is a pretty good entry in the Martial Arts genre. It's not great, but it should prove to be entertaining for those thirsty for some fists and feet of fury action. The individual fights are absolutely jaw droppingly fantastic, unfortunately, the thin story strung between them makes things feel a bit repetitive after awhile. Still worth a watch and Dark Sky Films has done a pretty decent job pulling this disc together. My hair wasn't blown back by the image quality, but the audio is spot on. Extras are slim but still good for a viewing. Considering the audience this will appeal to, I'm calling this one for the fans. Genre fans should dig it, newcomers might want to find something a bit more accessible.

Sale Price 21.24
List Price 29.98
Buy Now
3rd Party 4.96
In Stock.
See what people are saying about this story or others
See Comments in Forum
Previous Next
Pre-Orders
Tomorrow's latest releases