PSYCHO BEACH PARTY is a wickedly fun satire of Hollywood movie genres. Chicklet (Lauren Ambrose - CAN'T HARDLY WAIT, HBO's SIX FEET UNDER), a wannabe surf-girl with a split personality, becomes the primary suspect after a string of humorously gruesome murders terrifies the teen set. When the clues take her to the beach, the fun and suspense begin.

Parody is a potentially dangerous filmmaking weapon. Of course, the purpose of parody is to make light of and instill a bit of humor into a topic or a piece of source material that is usually without any humor. In order for the humor to be properly injected, there needs to be a respect for the material at hand. If you don't have respect or a love for what you attempt to lampoon, then the endeavor can feel disingenuous and perhaps even a bit disrespectful. 'Psycho Beach Party' aims to parody thrillers from the 50s, the loose and groovy beach movies of the 60s while also knocking on 70s and 80s slasher movies. The final results may be a bit iffy, but the film still proves to be a fun time.

Florence Forrest (Lauren Ambrose) and her best friend Berdine (Danni Wheeler) are having a tough time fitting in with the popular group of kids at school. Just because they don't party it up and offer themselves up for unwanted sexual advances, they can't seem to see why guys just aren't interested in them. After a murder at the local drive-in, the community is in shock and the police department lead by the matronly Captain Monica Stark (Charles Busch) are heading up the investigation. With a strict curfew in place, Florence and Berdine are going to have an even harder time of meeting the popular guys - that is until Florence discovers the amazing world of surfing!

After showing her stuff to the local (slightly homo-erotic) surf gang headed up by the chiseled and handsome Kanaka (Thomas Gibson), Florence is renamed "Chicklet" and accepted into the group - much to the chagrin of local hottie Marvel Ann (Amy Adams). Everything would be great for Chicklet if it weren't for her pesky multiple personality disorder that kicks in at the worst times! Having multiple personalities is also a bit problematic when you take into account that the numbers of dead people continue to rise - leading others in town to believe the young lady surfer Chicklet may just be the killer everyone is looking for! Or maybe it could be the spiteful Marvel Ann? Or maybe it could be B-Movie starlet Bettina Barnes (Kimberly Davis) who is tired of starring in bad movies? Could it possibly be Capt. Stark who has had it in for Kanaka and his boys ever since their relationship went sour? As the fingers start pointing, everyone in town is on edge and the killer is walking amongst them!

'Psycho Beach Party' is one of those movies that is precariously close to being the kind of parody that simply isn't funny - thankfully a goofy plot, a few well-timed one-liners, and some deadpan performances save the movie from ending up like 'Superhero Movie' or something far worse. Initially the mishmash of genres is a bit of a tough sell, especially since by the time the mid 1960s rolled around, beach movies were already dipping into becoming parodies of themselves, like Del Tenny's 'Horror of Party Beach' for example. Where this movie finds its strengths is in the cast. Lauren Ambrose, Amy Adams, Kimberly Davis, and especially Charles Bush as the female police Captain Stark provide the right blend of deadpan one-liners and yuk yuk eye-rolling jokes to be genuinely funny. As a movie it works more often than it fails - but even with that said some of the comedy can feel a bit heavy-handed like the film is trying too hard to remind the audience they're supposed to be laughing. The best moments are when the film takes a more subtle approach and just lets its actors and actresses be funny. 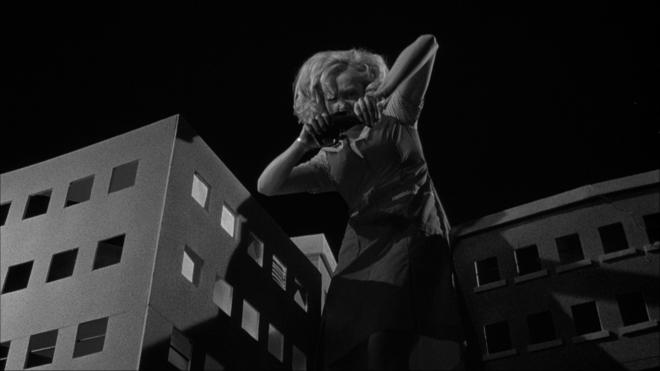 Similar to the 'Reefer Madness' musical, 'Psycho Beach Party' was based on a long-running touring stage show. While maintaining that stilted "stage" dialogue, the film version gets a nice kick from the expanded sets. The cast can move around in convincing ways while also employing obvious and cheeky rear-projected backgrounds to up the comedy and kitsch factor. All of these elements help to provide a solid foundation for parody that doesn't go so far as to insult the films that inspired the comedy in the first place while also working as an homage to a bygone era of filmmaking. Then you have the psycho killer slasher plot where the killer is seemingly going after people who are deformed or "wrong" in some way. While it's a bit tongue-in-cheek and decidedly un-PC, the fact that someone missing a finger or who has to make the use of a wheelchair is the target for a psycho killer actually becomes funny when you realize virtually everyone in the movie has something "wrong" with them so it's anyone's guess who the next victim might be. 'Psycho Beach party' may not be the funniest film I've ever seen, but it is pretty darn entertaining and is certainly worth a watch or two.

'Psycho Beach Party' arrives on Blu-ray from Strand Releasing and is pressed on a BD50 disc. Housed in a standard case, the disc opens to an animated main menu.

Enjoying a new remaster, 'Psycho Beach Party' makes for a pretty decent 1.85:1 1080p Blu-ray transfer. With film grain retained, detail is robust and offers quite a bit to appreciate from the hair styling and costuming to the set design and other intricacies that went into replicating the 1960s beach movie vibe. Black levels are very strong offering a nice three-dimensional feel to the film while ensuring strong shadow separation with minimal instances of crush. The problem I have with this transfer is in the areas of edge enhancement, at times this movie can look a bit too crunchy for its own good with some instances of ringing popping up here and there. Colors are the real star of the show offering bright primaries as well as the neons and pastels that leap off the screen. Flesh tones appear accurate - that is if one of the characters isn't being played by a man who has to wear copious amounts of makeup. Overall the transfer looks pretty great, especially for a low budget film of this nature.

With an English DTS-HD MA 5.1 track, 'Psycho Beach Party' is a real kick. Between the dialogue, the kitschy sound effects, and The B-52's inspired soundtrack, audio elements enjoy a strong resonance. Dialogue is never an issue as it keeps largely to the center channels leaving the music and sound effects to round out the surround channels. The sound is at its best during location shoots on the beach or in the neighborhoods as there is plenty of natural ambient noise and atmospheric elements to keep the surround channels engaged and present. Levels are pitch perfect allowing for the quieter and more intense moments to exist without the need to have to ride the volume button. A strong audio track that plays well to the film's comedic intentions as well as some of the playful horror elements.

Audio Commentary Track: Director Robert Lee King and Writer/Actor Charles Busch team up for this humorous and informative audio track. Busch - like his character in the film - is a lot of fun here.

Music Video: (HD 3:36) Music video featuring Los Straightjackets. It's a fun tune that is featured in the opening credits and throughout the movie. Also, how can you not dig a band that wears luchador masks?

Parody can be a tough sell. You want things to be funny but at the same time you don't want to insult the films you're aiming to make light of. 'Psycho Beach Party' may not be a perfect parody, but it is pretty darn funny and a good way to spend an hour and a half of your time. The A/V presentation scores some solid points and this Blu-ray comes with a pretty decent audio commentary that is worth a listen. I'm calling this one as recommended. It's too much fun to pass up.

Sale Price 22.99
List Price 27.99
Buy Now
3rd Party 19.09
In Stock.
See what people are saying about this story or others
See Comments in Forum
Previous Next
Pre-Orders
Tomorrow's latest releases