When the daughter of veteran 911 call center operator Pamela (Mischa Barton), and her estranged husband Jeremy (Luke Goss), a Senior Police Officer, is kidnapped and held hostage, they are left desperate, with no choice but to follow the kidnapper's rules: send messages through dispatch for all police and fire units to scatter to remote locations throughout the city where they are met with chaos. Not knowing who or why, the one thing they do know is if they fail to discreetly collaborate with one another they will be solely responsible for facilitating the biggest crime in the city's history. Now they must race against the clock to make the choice of their lives: save the city or save their daughter.

Sometimes when you're sitting down to watch a movie, you start to realize that you've seen the movie running in front of your eyes before. It could be the plot and the story, maybe some of the characters stand out, maybe there are a few action scenes or plot twists that are all too familiar, but you've seen the movie already. Sometimes this can be a welcome distraction because of the familiarity, other times it can be a bit irritating. In the case of 'Operator,' the film is so familiar that you start to wonder if the movie was meant to be that way from the outset and isn't in fact, a nice little bit of parody?

When life gives you lemons, sometimes it's best to toss them in a bottle of vodka, because lemonade won't make life for Pamela Miller (Mischa Barton) any easier. She's an experienced 911 operator who is getting a divorce from her policeman husband Jeremy (Luke Goss) because he was out drinking when a deranged caller reported a fire at their house while their little girl was inside. On top of those troubles, Pamela's job is facing work cuts so she could well be on the chopping block herself. Her supervisor Tony (Tony Demil) does her a solid by placing her at a low-traffic desk, but the favor could be the gift from hell.

It isn't before long that the same deranged caller that reported Pamela's house was on fire gives the distraught woman another ring. It turns out that the Caller (Ving Rhames) has kidnapped Pamela's daughter and is holding her hostage. Pamela has to redirect all of the city police traffic away from various crimes otherwise her little girl will drown slowly as she's lowered into a tank of water. When one of the calls places Jeremy in the line of fire, it becomes a cat and mouse race against time for Pamela and Jeremy to rescue their little girl and prevent the Caller from pulling off the heist of the century. 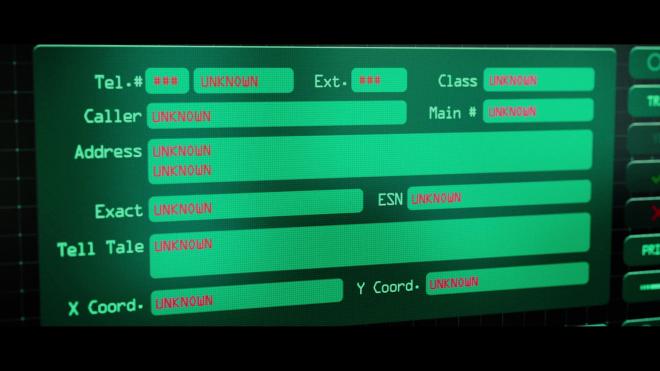 Picture 'The Taking of Pelham One, Two Three' and throw it into a pot with 'Speed,' 'Die Hard With A Vengeance,' 'The Call,' 'Phone Booth,' and about a dozen other action thrillers and add some boiling water. Stir the mixture until the original material of these films floats to the top, scoop that viscous mixture out and discard. The stuff that's left in the pot is essentially what 'Operator' amounts to. Void of any new ideas, the film rehashes material from other better movies to the point that you start to wonder if this wasn't what Directors Amariah Olson and Obin Olson intended the entire time?

This is where 'Operator' gets a little tricky. If the movie was intended as some sort of subtle action movie parody, it doesn't nearly have enough earnest line reads like: "I assure you, if you had anything to do with that accident, you're going to be very sorry you ever dialed 911." That's a great line read from Mischa Barton - if this movie is meant to be kind of silly. If this movie is meant to be a straight up action/thriller then it pretty much fails on every front. For starters, you see that Ving Rhames is the evil super villain right from the get go even though he's using a voice disguiser. Along with some other fairly obvious plot twists along the way, showing us who is on the other end of the line kind of kills the big third act reveal and spoils any real suspense.

Then you have the gigantic over-the-top action explosion gunfight final chase. If this is supposed to be a jab at the overworked action sequences that dull down a lot of action movies these days, then 'Operator' has something going for it. If this is just supposed to be how the movie ends for the sake of having a gigantic fireball of a final fight, then the scene is kind of pointless and repetitive  - especially when Pamela and Jeremy's little daughter happens to be in the vehicle they're shooting hundreds of bullets at and try and run off the road. The welfare of their child apparently is a backseat priority compared to getting the bad guys.

How you go into 'Operator' is going to be a big deciding factor for how much you come out actually liking the film. For a film made by young talent with new writers with a low budget - it's not bad if you think the film is working as a bit of action-packed parody. If you think the film is taking an earnest shot at being a straight thriller with some off the wall action shots, then you're going to be a bit disappointed. I myself rest someplace in the middle. It doesn't quite work as a straight action movie and as a parody it doesn't have enough lines like the one I quoted earlier. Parody is a subtle art that requires finesse in order to pull off, you want some elements to be on the nose, but others need to be only tangentially related to the rest of the movie so they come up later in the film and the humor rises to the surface.

'Operator' is far from a work of art, and it's tough to recommend to others who need to burn 90 minutes of time without buttressing their experience with some prescribed expectation caveats. I wouldn't outright recommend everyone see 'Operator' but at the same time I can't bring myself to suggest that people avoid it all together. This is one of those movies you're either going to love or hate depending on your mood and what you expect to see. If you're looking for a means to be entertained for a few minutes then you should be all set.

'Operator' arrives on Blu-ray thanks to Alchemy and is pressed on a Region A locked BD25 disc. Housed in a standard case, 'Operator' opens up to a series of trailers for other Alchemy releases before it reaches its main menu.

'Operator' may not be the greatest film ever produced, but it has a heck of a 2.35:1 1080p transfer working for it. Detail is crisp and beautiful offering full appreciation of fine facial features, costumes, as well as the film's Georgia shooting locations. Colors skew a tad towards the amber hues casting the film into the warmer, summer-feeling golden tones - but not graded so badly that flesh tones or primaries are pushed into that dreaded teal/orange vibrancy. Primaries overall look very strong and offer plenty of pop, however, there are a few shots where some colors lose that vibrancy, and the whites can become a bit blown-out. Black levels for much of the film's run are rock solid through most of the film and with strong shadows they create a wonderful sense of three-dimensional depth. Where the film loses some image mojo is with some heavy use of CGI effects - especially towards the end where the image has a noticeable flatter look to it and it also loses a lot of the fine details, colors, and blacks the image enjoyed. This is especially true for the film's closing shots that have a look of being shot in front of a green screen as none of the elements involved seems to be occupying the same relative area or space. It's a serviceable image, but it has some issues.

If you like your movies loud - you should enjoy the Dolby TrueHD 5.1 mix for 'Operator.' The sound effects get a lot of punch and oomph out of this mix - almost to the point of harming dialog clarity - and can provide for a wild surround sound ride. For the most part, dialog comes through crisp and clean and stays largely front and center with this mix. Some moments, especially towards the end the dialog is lost in the barrage of sound effects of the climax so it becomes difficult to hear what someone is screaming to the other person. Also, there are a couple of moments where due to the voice distortion it can be difficult to hear what the bad guy is saying. This mix provides plenty of space for dialog, sound effects and George Kallis' score to occupy, but every now and again some of these elements trip over themselves and it just becomes a bit too much sound. Not a terrible mix, because it does deliver when the action sequences kick in, it just has a couple problem spots worth noting.

'Operator' is just one of those movies that it's difficult to pin down exactly what you should expect from it. If you're gunning for an easy 90 minutes of entertainment, you should be all set. If you're looking for an action movie/thriller game changer, this isn't it. I didn't love it, but I didn't hate it either. Alchemy has brought 'Operator' to Blu-ray with a serviceable A/V presentation, but without any extra features worth speaking of, making a blind buy a tough sell. Give it a rent.

Sale Price 10.89
List Price 14.85
Buy Now
3rd Party 2.72
In Stock.
See what people are saying about this story or others
See Comments in Forum
Previous Next
Pre-Orders
Tomorrow's latest releases