A band of Vikings cross enemy lines and a panicked race begins. The losers will pay with their lives.

Action and Adventure flicks can get a bit of a bad rap every now and again - especially if they're dropped directly to Blu-ray. Movies with a simple plot and featuring a cast of some recognizable faces may be a dime a dozen, but that doesn't keep them from being fun. 'Northmen: A Viking Saga' is the kind of movie that most people would probably overlook because of its cliche cover art and the fact that it didn't get a major theatrical release (if any). It's easy to see why people would judge a Blu-ray by its cover, and usually it's a sound strategy, but in this case people looking for a fun and simple movie that doesn't require much in the way of brain power shouldn't look much further.

When a violent storm strands a crew of banished Viking warriors on the shores of Scotland, their leader Asbjörn (Tom Hopper) will have to use his cunning and wit to ensure the safety of his crew. The only problem is the fact that they're hundreds of miles off course in unfavorable lands where no Vikings hold any kind of fortified settlement. In order to get to safety, they're going to need to find some way to commandeer a ship and sail south. After a treacherous climb up the cliffs, Asbjörn and the remainder of his crew are set upon by a band of ravaging Scotsman. Once the exhausted Vikings clear out the rabble, they realize they have a far more valuable treasure in their hands - the daughter of the King, the princess Inghean (Charlie Murphy). With the daughter of the King in their hands, the pathway to riches and freedom should have been paved clear, only the King has other ideas.

At a time when a nobleman's child or a member of the royal family could be kidnapped and ransomed, the stranded Vikings naturally assume their safety. What they didn't account for is the fact that King Dunchaid (Danny Keogh) is a desperate man. Years of fighting other clans as well as the Vikings has drained his armies and resources putting him in the position of relying on savage mercenaries lead by Hjorr (Ed Skrein). When a king's strength is already diminished he can't appear to be any weaker by having to pay ransom. Rather than save his child honorably, Dunchaid lets Hjorr and his murderous band off their chains. If they can recover the princess alive, fine, if not - all Dunchaid has lost is a daughter instead of an entire kingdom.

Asbjörn and his crew soon learn there will be no ransom. As an army of warriors chases them down through the rocky terrain, the only hope they have of reaching the sea is with the aid of a mysterious Christian monk called Conall (Ryan Kwanten). Asbjörn doubts he can trust the lives of his men with the help of a Christian, but without any alternative they're forced into a fragile alliance as Hjorr and his band of savages will kill anyone and everything they see. 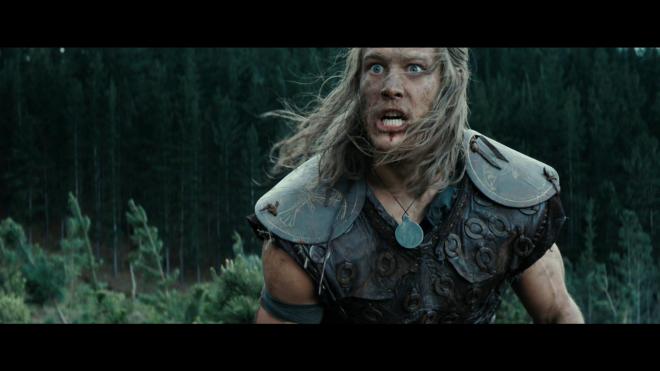 I'm just going to go ahead and give you permission to laugh at 'Northmen: A Viking Saga.' There really isn't any getting around it when this movie gets going and the "plot" starts to unfurl. If you think about this movie too much, if you start picking apart the story nuances, the character arcs or how all of Asbjörn men look and sound the same making it increasingly difficult to care when one of them dies - you'll just hurt yourself. Don't try to hold in your laughter at Ryan Kwanten's Ninja Monk, you could burst a gut. Just let that laughter out. I don't want to cause anyone any undue pain, so I strongly suggest that if you find yourself in front of this movie, just go with it. You'll have a lot better time.

What is essentially a chase film, 'Northmen: A Viking Saga' goes a long way to try to look and sound self-important. As it tries to justify the King's reasons for condoning the murder of his own daughter, this movie forgets to give us a reason to care about Asbjörn, his men, Conall, or even dear Princess Inghean. "Who are these people and why do we care about them?" are a couple of fairly important questions that should have been answered. Just a cursory explanation would have worked miracles - especially when Ed Skrein starts chomping on the scenery like it was made out of chewing tobacco. Skrein is a guy whose star is on the rise as he's set to take over the 'Transporter' franchise, but he's given no real sense of purpose here. He's mean and evil because that's what the script calls for, but since our heroes are hardly good guys themselves - after all, they did kidnap the Princess - it becomes difficult to care about Asbjörn and whether or not he and his men will make it home.

'Northmen: A Viking Saga' is pretty close to becoming a fairly good mindless action movie, but it forgets to give the audience a reason to root for the heroes beyond their being less bad than those other bad men. I'll give the movie some credit for offering some beautiful photography. The cut footage probably could be used for some sort of tourist marketing campaign to get people to visit Scotland. Action sequences are well choreographed and can be pretty exciting stuff, but again, because we don't really get the chance to care about the heroes, one can only get so excited when the swords slide out of their scabbards. I will openly say that I was entertained by 'Northmen: A Viking Saga' but at the same time it is pretty low hanging fruit. While far from amazing it is a good bit of fun if you're in the need for some mindless bloody violence and sword fights.

'Northmen: A Viking Saga' arrives on Blu-ray thanks to Anchor Bay and is pressed on a Region A locked BD25 disc. Housed in an eco-friendly case with slip cover, the disc opens to an animated main menu.

Say what you will about the movie, 'Northmen: A Viking Saga' offers up a pretty stunning and wonderfully detailed 1080p 2.40:1 transfer. I wasn't kidding when I said the cut footage of this movie could be used for a tourism ad campaign; it's simply gorgeous. The film looks the best when it's in natural surroundings making use of available sunlight and scenery. In these moments, the colors look cool but fairly accurate with solid flesh tones and strong black levels. When things move indoors, the transfer struggles a little as it appears that some artificial color grading was employed making the image look a bit too waxy and pushing the black levels into some instances of crush. Taken as a whole this is a pretty darn good looking movie, but it does have it's issues bringing down the score a tad.

'Northmen: A Viking Saga' gets a pretty strong, but slightly underwhelming Dolby TrueHD 5.1 audio track. When there is a lot to hear and things are exciting, this track is an absolute beast offering clear channel separation, solid levels, and a clean mix of all sound elements involved. When things move to the quieter and conversational moments, I was kind of let down. While dialogue is crisp and clear and can easily be heard, these quieter moments have a hollow "canned" feel to them that sounded inorganic as if all of a sudden the actors were dubbed. In these quieter moments, the surround channels lose a lot of their push and presence. Thankfully the majority of the movie is pretty action packed and does a swell job of things, but how the quieter moments are handled is what is keeping me from giving this track the full five-star treatment.

Northmen: A Look Inside A Viking Saga: (HD 11:57) This is unfortunately a pretty typical EPK style feature. Very brief and covers all of the expected production, actor, and story beats.

Just because a movie is pretty looking, doesn't mean it's a pretty good movie. I'll say 'Northmen: A Viking Saga" was a goofy good bit of fun, but it wasn't anything to write home about. The action was cool, but when you don't really care about the characters, it became harder and harder to work up much enthusiasm. It's worth a watch at least once. Anchor Bay delivers this movie to Blu-ray with a solid A/V presentation, but unfortunately there aren't really any extras worth watching. The movie is certainly a rental.

Sale Price 17
Buy Now
3rd Party 16.49
In Stock.
See what people are saying about this story or others
See Comments in Forum
Previous Next
Pre-Orders
Tomorrow's latest releases