A woman trying to recover from a sexual attack is locked in a posh apartment with a corpse of the very man she's been dreaming would murder her. She tries to hang on to reality when objects around her seem to come to life.

"How do you know what a psychologically disturbed woman would do."

A long time ago, there once was a period of 90s sexy thriller filmmaking where Sharon Stone wasn't a headline name. The blonde bombshell first broke out and showcased her lethal good looks opposite Arnold Schwarzenegger in Paul Verhoeven's adaptation of the Philip K. Dick science fiction classic 'Total Recall.' Not long after that, Stone would team up with Verhoeven again for the 1992 thriller 'Basic Instinct' which would catapult the actress to A-List status. But before that big career break could happen, Stone had to cut her teeth on a bunch of forgettable flicks. One such movie was 1991's 'Scissors' co-starring Steve Railsback. Frank De Felitta writes and directs a pseudo-sexual thriller that is neither thrilling or all that sexy.

Life for Angie Anderson (Sharon Stone) is a bit of a wild mess. First her father died when she was very young and the incident basically scarred her for life making sexual relationships, no matter how badly she wants them, all but impossible. On top of that she's your basic stereotypical cat lady as she keeps to herself rarely ever going outside so she can restore antique dolls and puppets. If she isn't going out to pick up a new doll to work on, she's at a therapy session with her psychologist Dr. Stephen Carter (Ronny Cox). He encourages her to dig deep and find the courage to get out and start dating men, even going so far as to use hypnosis on her.

While Angie does what she can to relate to people socially, her life gets thrown even further out of whack when she's sexually assaulted in her apartment building's elevator by a man dressed in denim with a bright red beard. Stabbing the man with a pair of scissors spares her any physical damage, but the emotional damage is still done. Coming to her aid is the dashing daytime soap opera actor Alex Morgan and his identical but disabled twin brother Cole (Steve Railsback). As Dr. Carter tries to help heal Angie's emotional trauma, Alex is there to awaken her deeply sheltered sexual desires.

As Alex tries to build a real relationship with Angie, his brother Cole isn't all he seems to be. Not only has he been watching Angie ever since she moved into the apartment building, he's also painted her likeness into one of his creepy erotic works of art. When Angie has a job interview at the apartment of a rich real estate developer, she is terrified to learn she's trapped inside the apartment with the man's dead body with no way to communicate to the outside world. Is it Cole playing a sick trick on her? Or is it a grand scheme of terror concocted by the man with the red beard? Angie's only hope depends on Alex figuring out the mystery and saving her - if he can. 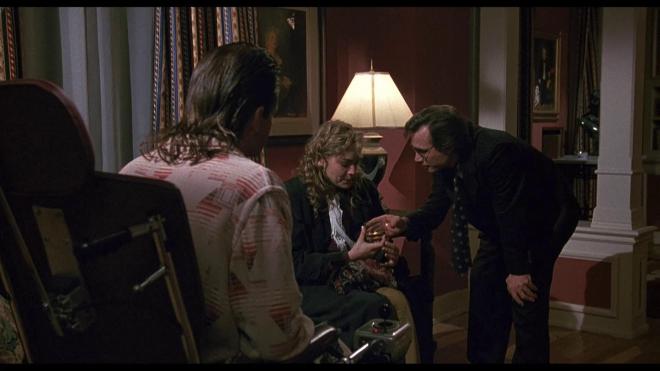 'Scissors' is a movie that starts out well enough, has a simple setup for a premise, but ultimately forgets what it is and spirals out into a mess of a thriller. While Angie's terror and emotional baggage provides the movie a fine foundation, this story just doesn't know where to go with it. On the side of being a provocative sexy thriller, 'Scissors' just doesn't cut it. While Sharon Stone certainly is attractive, the role of Angie really isn't anything to set the film's pace behind in that arena. Stone does everything she can to make the character interesting, but not even her talents as an actress and as a beautiful woman can salvage the role.

The main reason the film's suspense or interest as a thriller fails to come together is largely due to the convoluted and contrived script. Character motivations beyond Angie's are never fully developed so nobody in the movie does anything that makes any real sense. Why is Alex attracted to a woman whom by all accounts is the living definition of a "hot mess" of a person? Why is Cole such a creep? Why does Dr. Carter think the best way to treat a patient is to be belligerently disrespectful of their ailments? Added to that is something that is tough to pin down the cause, but all of the film's conversations have a stiltedness to them that just makes every scene harder and harder to watch. It feels like a bad combination of screenwriting, direction, editing, and even the performances from veterans like Ronny Cox and Steve Railsback that keep this film from ever feeling genuine. Toss in a random and terrible ending that feels forced and lazy rather than clever. I strongly dislike movies that have to burn ten minutes of exposition to explain everything we've just seen.

'Scissors' is one of those movies that on paper should have and could well have been a winner. Unfortunately, the final execution is a perfect storm of bad creative decisions. Thankfully Sharon Stone came away from this film unscathed and went on to enjoy a semi-successful career - until 'Catwoman' came along that is. I suppose 'Scissors' is a movie that is worth a watch as a curiosity but don't expect too much from it.

'Scissors' arrives on Blu-ray thanks to Kino Lorber and their Studio Classics line. Pressed on a Region A locked BD25 disc and housed in a standard case, the disc opens directly to a static main menu with traditional navigation options.

'Scissors' arrives on Blu-ray with a decent if a bit troubled 1.85:1 1080p transfer. While film grain is retained leading to some pleasing detail levels, the grain structure is very noisy and during darker scenes can appear like a swarm of locusts has descended on the screen. Thankfully facial features and clothing textures come through okay and there doesn't appear to be any sort of compression artifacts other than some slight edge enhancement to hold this transfer down for. Colors are a bit muted through most of the film's run time, but that seems to be by intent as when the third act kicks in primaries are pushed to ramp up the psychological insanity of the scenes. It's difficult to talk about without spoiling the show, but you'll see what I mean when you get to this part of the flick. Black levels are nice and inky and there doesn't appear to be any contrast boosting of any kind. For an early 90s film, this is a pretty good HD presentation and is likely the best this film will look on home video.

'Scissors' earns some solid marks with its DTS-HD MA 2.0 audio track. While this may not be the most mind blowing audio presentation ever, it gets the job done. Part of the issue with this track is the fact that a lot of the dialogue exchanges while easily heard, sound flat and canned like they were dubbed in during post-production. This is especially apparent during the scenes where Steve Railsback is having a conversation effectively with himself. While he plays the parts of Alex and Cole well enough, the dialogue pacing feels a tad off as well as does the hollowness of the voices. Beyond those issues, this track is actually pretty good. Imaging offers up enough channel movement for the scenes to sound genuine. Levels are well balanced and keep to the midranges ensuring that you shouldn't have to adjust the volume.

Heart of Midnight Trailer: (HD 2:20) A goofy looking trailer for a movie that could be a bit of good cheap fun.

Jennifer Trailer: (HD 2:02) An older trailer that does a good job of setting up what looks like an interesting thriller.

To All A Goodnight Trailer: (HD 2:46) There's something about the way that older trailers were cut and presented that makes movies look like a good bit of fun, especially cheesy horror movies featuring a killer dressed as Santa!

Burnt Offerings Trailer: (HD 2:29) I'm really excited for this release, I'm looking forward to seeing what an HD upgrade will do - this trailer is a bit older and softer looking, but it's got me excited just the same! Oliver Reed, Betty Davis, Karen Black, and Burgess Meredith in a horror movie together!

'Scissors' is just one of those movies that I had hoped would have been more than what it turned out to be. The parts are all there but somehow in the final execution the show became a muddy mess of a thriller. If you're a Sharon Stone fan it's worth a look at least once. Ronny Cox is a good bit of fun too. To that end, Kino Lober has done an okay job putting this disc together. The image quality may not blow your hair back but it's a notable upgrade over DVD and the film's audio track is effective. Sadly the only extras are a gallery of trailers for other upcoming releases. I'm calling this one as a rental. Keep your expectations in check and you should get through it okay.

Sale Price 18.99
List Price 29.95
Buy Now
3rd Party 14.89
In Stock.
See what people are saying about this story or others
See Comments in Forum
Previous Next
Pre-Orders
Tomorrow's latest releases