Crystal Lake Memories: The Complete History of Friday the 13th

For more than thirty years, FRIDAY THE 13TH has proven to be as unstoppable at the box office as its hockey-masked villain JASON VOORHEES, having spawned twelve feature films (and counting!), a syndicated television series and an extensive line of books, merchandise and collectibles. For its creators, FRIDAY THE 13TH has been anything but "bad luck," generating nearly $600 million in domestic box office receipts and turning an unstoppable, machete-wielding madman into a true pop-culture icon. Inspired by the critically-acclaimed book, CRYSTAL LAKE MEMORIES: THE COMPLETE HISTORY OF FRIDAY THE 13TH takes viewers behind the mask on an epic journey into the making of the landmark horror franchise -- from its humble beginnings in 1980 at a New Jersey summer camp to the blockbuster release of its 2009 "reboot." Combining hundreds of rare and never-before-seen photographs, film clips, outtakes, archival documents, conceptual art and behind-the-scenes footage, and featuring interviews with more than 150 cast and crew members spanning all twelve films and the television series, CRYSTAL LAKE MEMORIES is the ultimate tribute to one of horror's most iconic and enduring franchises.

Living up to its title, 'Crystal Lake Memories: The Complete History of Friday the 13th' is like taking a stroll down movie memory lane with the folks who made us scared of going to summer camp. On the other hand, for those with a more twisted sense for adventure, the horror films featuring the machete-wielding, hockey mask wearing killer might have inspired some to seek out the nearest campsite with a lake. Then there were those who didn't care either way for "the psychotic mama's boy" thirsty for camp counselor blood because they were either on Team Freddy Kruger or Team Michael Myers. (I, for one, leaned more towards Michael's silent rampage, followed by Freddy's murderous wisecracks, before given Jason whatever love remained.) But, whatever one's sentiments towards the unstoppable force known as Jason Voorhees, there is no denying the monster lurking in the trees nourished the childhood fears of those growing up in the 1980s. The mass murderer of "Camp Blood" is as much a part of our collective memories as the music, clothes, history and politics of that radical decade. And the comprehensive documentary celebrates Jason's cultural importance and cinematic history.

Spanning an intimidating six hours and forty minutes, the documentary exhaustively chronicles the production of the entire franchise up to Platinum Dune's 2009 remake. But, as the title suggests, its history is not told from an objective point of view, as if recounting events from a detached perspective. Although Corey Feldman, who played little Tommy Jarvis in part four 'The Final Chapter,' narrates and plays host, his voice functions more as a transition between conversations and a shift from one movie to the next. Directed by Daniel Farrands, writer of 'Halloween: The Curse of Michael Myers' and director of the equally excellent movies 'His Name Was Jason' and 'Never Sleep Again: The Elm Street Legacy,' the doc is essentially an all-inclusive collection of interviews with the people personally involved and largely responsible for making Jason into a beloved horror icon. Taking inspiration from Peter Bracke's book of the same name, the original cast and crew from each movie discuss their involvement and participation, to ultimately share their memories and anecdotes working with others. And, boy, the stories told from each person are worthwhile and an absolute joy to hear.

It creatively opens with Feldman sitting at a campfire, surrounded by youngsters attentively listening to the myth of a hockey-masked murderer prowling campgrounds in search of wayward teens. It is an amusing setup, framing not only the reminiscent feel of the early entries in the series but also Farrands and his crew's intentions of looking back at each installment with fondness. The first forty-five minutes are understandably dedicated to the movie that started it all, the original that doesn't even feature Jason Voorhees at all. (If that's a spoiler to some, then that's too bad. Shame on you for watching or reading about this doc before enjoying the movie beforehand.) For devoted fans of the franchise, much of the information shared by director Sean S. Cunningham, producer Steve Miner and composer Harry Manfredini is nothing new. We heard of the title being advertised before there was even a script, the story capitalizing on the success of John Carpenter's 'Halloween' and the legendary music motif taking inspiration from a particular piece of dialogue. 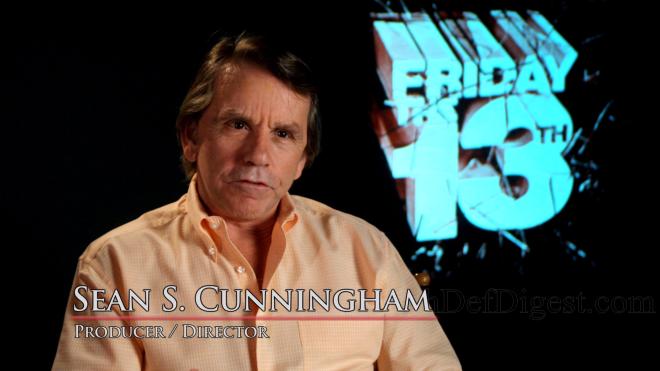 However, there is still much to glean for their discussions, as well as from others. It's great to hear from actresses Adrienne King and Betsy Palmer talk about their initial concerns walking into the project and share various delightful memories from the set. Hearing from special makeup effects maestro Tom Savini is especially great because "The Godfather of Gore," the man largely responsible for creating Jason's deformed appearance, reveals the secrets behind the gory effects and his influence behind the now-legendary final scare jump at film's end. Going into the conversation about the first in several sequels, a good deal of the attention is directed at Frank Mancuso Jr., the film producer who openly admits for being the man guilty of carrying Jason's torch into the long franchise it has become. Arguably of most interest to loyal fans, the talks with Mancuso, the various directors and the numerous cast members touch on each film's notorious relationship with the MPAA and the frequent cuts made to every entry to avoid the dreaded X rating, preventing much of the intended of the gore.

Hearing these stories, especially part seven 'The New Blood' by special makeup effects wizard John Carl Buechler, only makes me wish there existed an unrated director's cut for each film, which there sadly isn't, except for 'Jason Goes to Hell: The Final Friday.' Nevertheless, the memories shared throughout 'Crystal Lake Memories' succeed at generating an appreciation for the franchise and Jason's significance as a cultural horror icon. A few actors, such as Betsy Palmer, continue to express their dislike with the series while others, such as Kevin Bacon and Crispin Glover, want nothing to do with the franchise and don't participate in the documentary. But of genuine delight are the filmmakers of later sequels speaking with an apologetic tone while also being candid about what went wrong in each production. Every conversation is a pleasure with plenty to learn from, making the doc's daunting close to seven-hour runtime seem to fly by. As soon as you start watching, it's difficult to turn it off. For fans of both Jason and the horror genre in general, this incredibly comprehensive look at the franchise is a must-own.

Image Entertainment brings Daniel Farrands' documentary 'Crystal Lake Memories: The Complete History of Friday the 13th' to Blu-ray as two-disc Collector's Edition. Both are Region A locked, BD50 discs sitting on opposing panels inside a regular blue keepcase. The first disc contains the first four hours of the documentary while the second comes with the remaining two hours and forty minutes. At startup, viewers are taken to a static menu screen with music playing in the background and the option along the right side to watch each segment individually or sequentially.

The exhaustive and comprehensive retrospective is memorialized on Blu-ray with a great-looking 1080p/AVC MPEG-4 encode. The cast & crew interviews, which were all shot recently for the documentary, come with excellent clarity and definition, showing sharp details in the hair, clothing and the natural skin tones. Clips from the 'Friday' movies and many stock photos are just as detailed as the interviews, but there are several moments when a few of those conversations appear poorly resolved. Contrast either runs a tad hotter than it should, making highlights noticeably bloom, or blacks come off a bit too strong, looking like hints of crush and ruining the finer lines in the darker portions. Episodes from the TV series and other random footage are also of poor quality, but that's understandable and forgivable. Some very mild banding can occasionally be seen in the background, but the overall palette is bright and vivid, making for a great high-def presentation fans will enjoy for years.

Jason haunts the darkest recesses of our film memories with an equally pleasing DTS-HD MA soundtrack. In all fairness, an exhaustive documentary such as this isn't necessarily required to offer an immersive audio experience, so expectations must be tempered and restrained a bit because the design is really more of a stereo track. And with that in mind, the lossless mix does the retrospect justice with imaging that delivers a great sense of presence as music and a couple discrete effects bleed into the other two channels, widening the soundstage throughout the doc's incredibly long runtime. The mid-range is nothing too impressive or noteworthy, but it's also nothing to scoff at, providing plenty of detailed clarity and distinction during a few loud, high-pitched moments of amusement. Bass is appropriate and surprisingly weighty, giving the music some appreciable oomph, and dialogue reproduction is clear and well prioritized, making the track a great complement to the video.

Clocking in at an intimidating six hours and forty minutes, 'Crystal Lake Memories: The Complete History of Friday the 13th' exhaustively chronicles the production of the entire franchise up to Platinum Dune's 2009 remake. From documentary filmmaker Daniel Farrands, the lengthy film is an impressively detailed and incredibly comprehensive look at the series' cinematic importance and cultural impact, creating a larger appreciation for both fans and the mildly curious. The two-disc Blu-ray set features great picture quality and a pleasing audio presentation. Although the commentary is quite enjoyable, supplemental materials are sorely lacking. Nonetheless, the overall package is recommended.

Sale Price 28.96
Buy Now
3rd Party 26.3
In Stock.
See what people are saying about this story or others
See Comments in Forum
Previous Next
Pre-Orders
Tomorrow's latest releases