Rey Ciso (Adam Brooks) was once the greatest editor the world had ever seen. Since a horrific accident left him with four wooden fingers on his right hand, he's had to resort to cutting pulp films and trash pictures. When the lead actors from the film he's been editing turn up murdered at the studio, Rey is fingered as the number one suspect. The bodies continue to pile up in this absurdist giallo-thriller as Rey struggles to prove his innocence and learn the sinister truth lurking behind the scenes.

For poor film editor Rey Ciso (Adam Brooks), the eponymous hero of the Canadian low-budget production 'The Editor,' working in the industry after losing his fingers on his right hand has become a living hell. The once prominent, celebrated and award-winning editor who's had the privilege of working with some of the (fictional) Italian greats is now an incessantly belittled and insulted washout. Everyone on the set of the latest mystery thriller from hack-maestro Francesco Mancini (Kevin Anderson) treats Ciso with mild disgust. he is tolerated as a necessity of the process. Mancini, in particular, reminds him of his disability, calling him crippled and admitting he was hired as a joke. Leading man Cal Konitz (Conor Sweeney), is disturbed shaking hands with the editor's wooden prosthetic. Even Ciso's wife, Josephine Jardin (Paz de la Huerta), joins in the chant to humiliate and demean our protagonist in the privacy of his home. For Rey Ciso, he can't find an escape from the bullying and endless derisions.

However, in spite of all this seeming like some sort of dispiriting and near funereal tragedy meant to pull at the heartstrings, the movie follows Ciso's hopelessly bleak existence with a thick splattering of comedy. With the more depressing and dramatic aspects of the plot out of the way — in less than ten minutes, in fact — filmmakers Adam Brooks and Matthew Kennedy suddenly turn the tables on their audience with unexpected gags and comments, deliberately bad dubbing where the vocals don't exactly match lip movement, and a multitude of comically terrible over-acting from most of the cast. The directing duo, who also share writing, starring and producing credits, shift the tone not in a shockingly abrupt manner but in interestingly subtle ways. They start with a droll quip here, a silly visual prank there, understated remarks that at first raise eyebrows, but with each gag, they slowly increase the buffoonery, growing sillier and sillier, into total absurdity.

Brooks and Kennedy, the latter of which stars as the incompetent inspector Peter Porfiry, have been making quite the career of churning out intentionally bad low-budget features in the vein of exploitation cinema. Their professed love of this particular period of film history is evident when looking at their work, and this little ditty blatantly and unmistakably cements that love as a fact. Only, the way in which they express their unconditional adoration is by mimicking those films down to the tiniest detail while also injecting a heavy dose of comedy into the mix. As the old adage goes, "imitation is the sincerest form of flattery." And here, the two specifically imitate the heavily stylized and often gory Italian thrillers that were popular in the 1960s through the 1980s, a subgenre commonly known as giallo, an influential predecessor to the 1980s American "slasher" craze. The most remarkable aspect of the production is how they got everything right without missing a beat, almost seeming like some long lost gem, while delivering one hilarious moment after another. 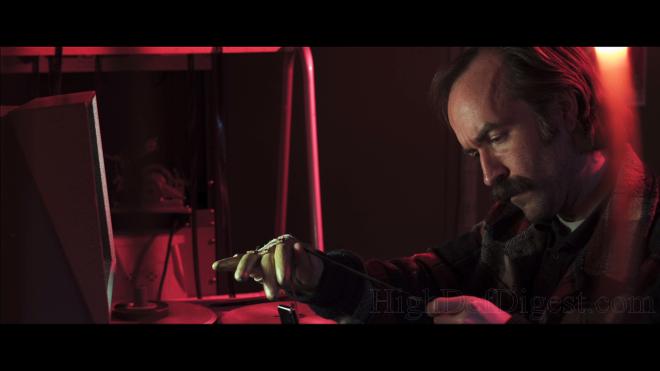 The plot is a near mirror-perfect copy of the giallo, strictly following the formula that brought many Italian filmmakers, such as Mario Bava and Dario Argento, to prominence and acclaim. An unidentified killer dressed in a black trenchcoat starts murdering various cast and crew members of Mancini's very cheap-looking production, chopping the four fingers of each victim's right hand in the process. It's a ridiculously funny way of trying to point the finger (pun intended) at Brooks's sad, pathetic editor, which the more observant viewer will immediately identify as the red herring, but Kennedy's inept inspector Porfiry is a bit too slow to make the connection. For more comical effect, the directing duo also draws our suspicions to Sweeney's flamboyantly good-looking Cal, like a trunk full of various murder weapons and conveniently being near the latest crime scene. It's all in an effort to keep the audience distracted from the real killer, and the filmmakers do a great job of maintaining that person's identity a mystery until the final reveal when it clashes to a confusing but hilarious ending.

For those better acquainted and experienced with this particular subgenre, 'The Editor' continues the laughter and its adoration with heavily stylized look and feel. One of the unique aspects of these films is the intense, bold use of colors, especially reds and blues, which counter the graphic, in-your-face depictions of violence and the often puzzling but energetic camera movements. Brooks and Kennedy worked carefully with Jon'Nathon Stebbe to accurately duplicate the cinematography, framing each scene with a variety of odd compositions, randomly sudden close-ups and amusing tracking shots that follow the black-gloved hands of the killer slowly creeping behind an unsuspecting victim. Frankly, they did a remarkably fantastic job of recreating the giallo's distinctive features, down to the point of almost seeming like something Argento would be proud to have made himself, even blending a bit of the supernatural, à la 'Suspiria,' just for good measure. And in the end, the satirical love letter surprises, delivering a fun mystery thriller with a healthy dose of laughter.

Shout! Factory brings 'The Editor' to Blu-ray as a two-disc combo pack under the distributor's Scream Factory line. The Region A locked, BD50 disc is housed inside the normal blue case with a second DVD-9 disc on the opposing panel, reversible cover art and a cardboard slipcover. At startup, viewers are taken a menu screen with full-motion clips, options along the bottom and music playing in the background.

'The Editor' arranges and rearranges the series of grisly murders onto a beautiful 1080p/AVC MPEG-4 encode that's faithful to the filmmakers' intentions.

Shot on digital HD cameras, the picture displays a sumptuous and flamboyant array of primaries, washing the 2.35:1 image with bright, dramatic reds and striking, energetic blues. Although the palette favors a yellowish tone, secondary hues remain clean vivid and clean, giving the freshly-minted transfer a welcomed, animated appeal. Contrast is spot-on with comfortably bright, crisp whites while inky, rich blacks provide the frame with great dimensionality and deep, penetrating shadows. A couple scenes unfortunately show a bit of banding and contrast tends to run hot enough to ruin the finer details in a few sequences. However, much of the high-def presentation is in excellent condition, showing sharp definition and clean, distinct lines in the clothing and furniture while facial complexions appear healthy and revealing throughout.

The giallo satire debuts with a pair of DTS-HD Master Audio soundtracks — a 5.1 track and a stereo option — that are generally pleasing, but one is definitely better than the other. For the most part, the surround soundtrack does its job well with a wide soundstage and a good amount of atmospherics in the rears, creating a nice soundfield with only a couple notable moments of envelopment. However, ambient effects tend to feel stretched and forced during several sequences, making dynamic range seem somewhat limited and uniform.

Interestingly, the design is much more welcoming and appealing in stereo, as if it was originally recorded as such. The lossless mix comes with a better sense of presence and a broad, spacious feel, which is made all the more apparent by the unique musical score. The track delivers lots of warmth and excellent fidelity while the mid-range remains clean and detailed from beginning to end. Low-bass isn't particularly noteworthy, but it's accurate with a few appreciable response and weight, complementing the music well. Vocals are deliberately distant, flat and a tad out of sync, as if the result of bad dubbing and ADR, but they remain clear and intelligible without ever being drowned out by the movie's louder segments.

In 'The Editor,' writers, producers and directors Adam Brooks and Matthew Kennedy profess their undying love for Italian mystery thrillers, known as giallo, and exploitation cinema in general. It's a lively and wildly entertaining satire for fans of the subgenre, but even those unfamiliar with the style will have plenty to laugh at. The Blu-ray arrives with an excellent audio and video presentation, but supplements are pretty light. Nevertheless, the overall package will please cult collector's everywhere.