The Duke of Burgundy

'The Duke of Burgundy' is what 'Fifty Shades of Grey' only wishes it could ever be in its wildest masochist dreams. It's a more personal and accurate portrayal of a lifestyle that challenges a person's understanding of pleasure. The chamber drama is an eloquent and often poetic character study of how the dominant-submissive relationship can affect people differently, particularly when one partner performs consensual acts of humiliation only to indulge the needs of the other. It pushes a viewer's definition of love when understood from that perspective. From relative newcomer Peter Strickland, whose two previous features also impressed with a deeper exploration of genre conventions, the film also romanticizes many of the acts seen on screen while immediately undermining them with reaction shots of one partner clearly seeming troubled by the demands placed upon her. And the most fascinating aspect of the entire plot, which Strickland also penned, is the psychological turmoil coming from the person playing the dominant role. The submissive partner, on the other hand, is the one ultimately in control of the game.

Unlike the ridiculously popular 'Fifty Shades,' Strickland doesn't slowly introduce audiences to this deeply intimate and private world of erotic practices. Aside from a brief lyrical and idyllic opening with the lovely Chiara D'Anna meditating by a stream, the British-born filmmaker immediately walks us to the secret red room with D'Anna's Evelyn showing up late to work and an annoyed Sidse Babett Knudsen as Cynthia promptly doling out orders. Seen from Evelyn's point of view for the first twenty minutes, her menial chores are continuously met with Cynthia's harsh criticism and an overbearingly tone of malice. Although mostly silent with wide-eyed bewilderment, D'Anna convincingly carries her employer's demeaning remarks and orders with a childlike innocence that's on the verge of bursting into tears. We're never sure what she's thinking or why she allows herself to be humiliated, but there is an air of misery and hopelessness that seems permanently etched in Evelyn's face and body language. Ironically, she accepts the verbal abuse and with every completed housework, comes back to Cynthia as if begging more. 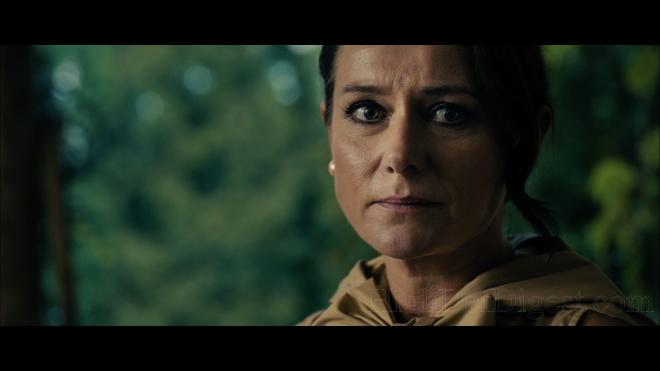 Strickland takes a rather interesting approach in introducing us to his characters. After those twenty minutes of witnessing what seemed like the exploitation of a housemaid, the director suddenly turns the tables and shows those same events from Cynthia's point of view. Within a couple minutes, it becomes apparent the women are simply roleplaying with Evelyn intentionally bungling the housework so as to be punished. But more fascinating is watching Cynthia privately wallowing in discomfort, exposing a more complicated and potentially troubled relationship seething behind the closed doors of their charmingly rustic cottage. Knudsen is marvelous as a woman unsure of herself and her commitment to her partner's sexual desires. Her sullen eyes reveal her easiness while feigning a smile. And as Evelyn digs deeper into the lifestyle, the noticeably younger woman's gitty enthusiasm blinds her from considering Cynthia's emotional state. The conversation where an intended birthday gift suddenly turns to a discussion about human toilets is one the film's most honest moments, as Cynthia watches from a distance through a window at Evelyn's thrilled face, unable to relate while fearing what's to be demanded of her next.

For the remainder of 'The Duke of Burgundy,' a title referring to the name of a European butterfly, which in turn only refers back to Cynthia's field of study, Strickland further explores the dynamics of this interpersonal relationship. He treats the subject matter with the kind of delicate interest and compassion we'd expect of a drama about any troubled marriage. It's an honest portrait of a romance that seems forsaken and doomed to fail. The icing on the cake is the production feeling reminiscent of 1970s low-budget eroticism, the sort fans of exploitation cinema will find eerily familiar, almost as though expecting the names of either Jesús Franco, Russ Meyer, Jean Rollin, Joe D'Amato or Radley Metzger being attached. The photography of Nic Knowland tones down the overall palette and favors brown-yellow earth tones, which not only adds a weighty emotional element to the plot but also splendidly complements Strickland's homage-like intentions. Mixed with creative camerawork that lyricizes an unstable and dubious romance, the film makes for an impressive and haunting experience on the psychological sacrifices and the lengths one goes for pleasing their partner.

Shout! Factory brings 'The Duke of Burgundy' to Blu-ray as a two-disc combo pack with the Region A locked, BD50 disc sitting opposite a DVD-9 inside a blue, eco-elite case with reversible cover art. At startup, the disc goes straight to a menu screen with full-motion clips and options along the bottom.

The British drama arouses Blu-ray's innermost pleasures with a beautiful, highly-detailed 1080p/AVC MPEG-4 encode that exposes every nook and cranny of the women's idyllic cottage. Viewers can make out the lettering on bottles and books in the shadowy, dusty background, and other oddities hanging the walls are plainly visible. The intricate design of the fabric lining various pieces of furniture are well-defined, the leaves of trees surrounding the home are crystal clear, and the stitching on clothing is precise. Especially during closeups, individual pores, negligible blemishes and the tiniest wrinkle are distinctly detailed, providing faces with a healthy lifelike appeal.

Shot entirely on high-definition cameras, the stylized digital cinematography of Nic Knowland favors a more natural earth-tone palette where the 2.35:1 image is mostly saturated in browns and yellows. Splashes of reds and greens are slightly toned down but still look good while some nighttime sequences come with a noticeable blue tint. Although much of the photography is interestingly soften, which further romanticizes the subject matter, the transfer nonetheless displays pitch-perfect contrast and crisp, brilliant whites. Black levels are slightly affected by this but are overall deep and accurately rendered with strong detailing and clean visibility in the darkest shadows.

Keeping to its stylized 70s feel, the film arrives with an excellent DTS-HD Master Audio soundtrack that elegantly and exotically complements the story and the women's relationship. Although the codec arrives in a 7.1 configuration, the design is really a front-heavy mix with much of the background activity spread throughout the three front channels.

Occasionally, the birds chirping in the distance bleed into the sides or the flapping of moth wings can be heard all around, but it's a very subtle effect that nonetheless enhances the soundfield. When the upmixing function is applied, those same sounds extend very lightly into the front height channels and the rear overheads, creating a satisfying soundscape. The haunting ethereal music of alternative pop duo Cat's Eyes makes best use of the high-rez audio, exhibiting superb separation and fidelity in the instrumentation, revealing an extensive, room-penetrating mid-range. Low bass isn't particularly noteworthy, but it's accurate and appreciably responsive nonetheless. Being more of a character study, a great deal of attention is placed on the dialogue and the soft-spoken, intimate conversations of the women, and the lossless mix delivers each line with outstanding clarity and terrific intonation in the voices.

While erotic dramas are suddenly becoming more acceptable with mainstream audiences, longtime fans of the genre can take comfort in knowing it continues alive and well in the world of low-budget, independent productions with 'The Duke of Burgundy.' Director Peter Strickland gives audiences an honest portrait of the interpersonal dynamics of a dominant-submissive relationship, showing that the people of this lifestyle are more complex than two-dimensional cutouts looking for their inner kinkiness. The Blu-ray from Shout! Factory arrives with an excellent audio and video presentation that remains true to the creative intentions of the filmmakers. With a small but good collection of supplements, the overall package comes recommended for fans of the genre and even curious neophytes.

Sale Price 19.99
List Price 26.99
Buy Now
3rd Party 12.1
In Stock.
See what people are saying about this story or others
See Comments in Forum
Previous Next
Pre-Orders
Tomorrow's latest releases