Not being someone who can speak from experience, I am left only to assume the absolute hell dealing with addiction must be for people. I've only ever been on the outside looking in. I've offered help and support to some close friends and family, but I've never dealt with that personal hell myself. You can read countless stories, watch news programs, see a movie or two about it, but at the end of the day you only experience the tiniest fractions of what the reality is. Even films like 'Requiem For A Dream' offers only an artistic visual nightmare of the situation. 'Heaven Knows What' starring Arielle Holmes and based on her to be published memoirs "Mad Love In New York City" is perhaps one of the most honest and brutally frank depictions of heroin addiction I've seen.

For Harley (Arielle Holmes) and her close-knit group of friends, life is a daily grind. They don't work long hours, or have a tough commute, or have a hard time making the rent, their hardship comes from a daily need for a fix. Even with cheap heroin out there, it still requires more than a little panhandling, theft, and finessing favors from dealers to get what they need. Worse than Harley's need to slam heroin is her love for fellow addict Ilya (Caleb Landry Jones).

Ilya - even as a junkie himself - amounts the only real stability Harley has ever known in her life. He abuses her constantly, screams at her and does everything he can to tear her apart in the quest for her to prove her love for him. The only way to do that is to kill herself. Taking the Shakespearian route of suicide, Harley hustles to save up enough change to buy razor blades where she promptly slits her wrist to prove her devotion to Ilya, only Ilya can't handle the responsibility that he pushed onto her and leaves without seeing her into the hospital. After a brief stay in Bellevue following her attempted suicide, Harley is back out on the streets with no prospects and without any means to care for herself.

When Mike (Buddy Duress) takes Harley under his wing, she's given a chance to somewhat normalize - even as they both shoot up on a regular basis. They're able to find cheap living accommodations, Mike gives her a phone so she can find him when she needs to, and some pieces of her life are starting to fall back into place. Then Ilya shows up again. First he harasses Harley, taking her things, hiding her bags in strange places - but when he overdoses, Harley realizes she's never gotten over her feelings for him. As the pair get back together, Harley may never be able to move past him or her addiction. 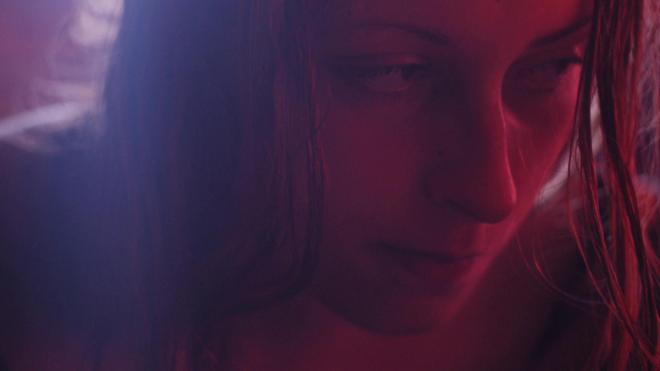 'Heaven Knows What' is a heck of a hard-hitting film. Working as equal parts documentary and fiction, the film features a fictionalized Arielle Holmes interacting with the real life addicts she hung out with every day of her life. In fact, the only professional actor in the entire film is Caleb Landry Jones as Ilya. As the story goes, Ben and Joshua Safdie were shooting a project in New York and through happenstance met Arielle as she was getting on the subway. They got to know her, heard her life story and then encouraged her to write about her experiences. Over the course of several days and weeks, Arielle turned up with what became her memoir "Mad Love In New York City." The two brothers were impressed with the material and then set out to make a movie about it.

To that end, it's difficult to comment on the film from a story structure sense. It doesn't follow a traditional three act narrative structure and is more in tune with a documentary. As the audience, we're left to watch these people work out their daily routines of finding enough change and cash to get high and then maybe if they're lucky have enough left over to have a place to sleep for the night. It's grueling to watch, but it is also beautifully and terrifyingly frank.

It is also difficult to rate performances since the film uses the real-life counterparts to Arielle's memoir as actors. Their relationships are made up of manic interludes of screaming and yelling at each other over mundane inconsequential issues and then is quickly followed by sweet, calm, and tender moments. Scenes may seem repetitive and pointless, but it's also indicative of their routine. These are people who are going to do whatever it takes to feel that warm comforting rush, knowing full well the dangers they face and what it does to them or how it can tear apart their relationships. Nothing else is important in that moment. We don't get an origin story. We don't know the history of how Harley came to live on the streets and an addict; it doesn't matter because, in the moment, all that matters is finding the next fix.

As Arielle Holmes' book is still to be published, I'm left to judge this experience from a very impersonal, almost cynical perspective. If these events did happen to some extent, if what we see on screen is an accurate depiction of life as an addict, if these people are in fact the real life counterparts to Holmes' life story, then 'Heaven Knows What' is a triumph of a movie. If this amounts to be another "A Million Little Pieces" where it is later learned that the story is riddled with inaccuracies and lies, then 'Heaven Knows What' will not only be a disservice to the people that deal with addiction, but it will anger me to no end because I was genuinely taken in by this film and the dark path these people are traveling. It's a hard watch, but one that I feel is worth the time and emotional effort.

'Heaven Knows What' arrives on Blu-ray from Radius and Anchor Bay and is pressed on a BD50 disc. Housed in a standard case, the disc opens to a trailer for 'It Follows' before reaching the main menu.

'Heaven Knows What' features a purposefully rough-looking 1.78:1 1080p transfer. Shot digitally, the film features a constant haziness to it, giving the movie an almost dream-like quality. Because of this haziness, detail levels have a tendency to fluctuate from being well detailed and clear to smeary and blurry. In part this is due to the nature of how the film was shot, but also from an artistic standpoint as well. Colors are also tough to judge accurately as 'Heaven Knows What' maintains a distinctly drab feel throughout much of the film's run time. Shot during late fall and winter in New York city, everything looks dull and lifeless. Green grass has more of an olive coloring, reds are more of a rich crimson pallet while flesh tones offer a sickeningly pale range for the cast. Black levels are also a bit hit or miss. While the film has a nice sense of dimensional depth to it, blacks never have a true inky quality to them due to the pervasive haziness.  To that point, I do have to say that this transfer is still very strong and considering the type of movie that is being presented, this transfer works to great effect.

Offering only a Dolby Digital 2.0 track, 'Heaven Knows What' gets the most life it can out of its stereo track. Considering the film wasn't shot under ideal studio conditions, this audio track is a marvel. For starters, dialogue is crisp and clean and easily heard throughout. There is a wonderful amount of background and ambient effects to keep the track sounding life-like and present without having intrusive background elements spoiling audio continuity. Given its stereo nature, imaging only has so much range but is still quite effective. The track does enjoy a nice midrange presence and levels are well balanced so there isn't any need to monitor your volume. Perhaps the best part of this track is the amount of presence given to the electronic score by Paul Grimstad and Ariel Pink. It's a haunting score that beautifully fits the film, it's a shame that it isn't available for purchase - at least that I have found.

Deleted Scenes: (HD 9:48) Some more very good scenes from the movie, but it's pretty easy to see why they didn't make the final cut of the movie.

Ariel Pink Music Video: (HD 3:28) A decent video for a nice song, but it rides on one of my biggest pet peeves is video with a vertical camera phone.

"A Hot Two Weeks" The Making Of Heaven Knows What: (HD 17:00) It's an interesting if a bit odd behind the scenes feature. Part of how the Safdie brothers met Arielle Holmes is done in a reenactment while coupled with recent interview footage between the brothers in Central Park, at the Tokyo International Film Festival as well as Arielle on set in her next movie. We also see and meet the real-life Ilya who passed away from an overdose in April 2015. One of the better, but sadly brief behind the scenes features.

'Heaven Knows What' is a visceral viewing experience. It goes for the gut and doesn't pull punches. You want to root for the characters but know deep down that things may never change for them. The Safdie brothers pulled together a hell of a raw film. Anchor Bay and Radius put a great effort into this disc with a solid representative A/V presentation as well as a set of strong extra features that are actually worth watching. Recommended.

Sale Price 17.99
List Price 22.99
Buy Now
3rd Party 13.9
In Stock.
See what people are saying about this story or others
See Comments in Forum
Previous Next
Pre-Orders
Tomorrow's latest releases