Revenge may be a dish best served cold, but it can also provide a solid setup for one hell of a great movie. Khan blames Kirk for his wife's death and we have 'Star Trek II: The Wrath of Khan.' The screwup son of a Russian mobster kills the dog and steals the car belonging to a former assassin and we get 'John Wick.' Because of the barbarous scalp trade we have Burt Reynolds hungry for justice in Sergio Corbucci's 'Navajo Joe.'

As whites pushed west and grabbed up more and more land, frequent clashes with native tribes resulted, creating a black market industry for Indian scalps. One scalp earned the man carrying it a dollar. For Duncan (Aldo Sambrell), his brother Jeffrey (Lucio Rosato) and their gang of bloodthirsty cutthroats, business is booming. After raiding a peaceful tribe of natives, they make off with their bounty headed towards towns that would offer a fair price for their haul. Along the way, a mysterious lone Indian warrior calling himself Joe (Burt Reynolds) appears on the horizon. Seeing only money riding a Pinto, Duncan orders two of his men to take the scalp. Joe sends these men's corpses back tied to one of their horses. Everywhere Duncan goes, Joe is there to give him a little peek at hell as he picks off Duncan's men one by one.

After failing to unload their bounty when it's learned they've been preying on peaceful tribes, Duncan and his gang are approached by a mysterious man who offers them the opportunity to get in on a share of half a million dollars. All Duncan has to do is capture a train bound for a new bank and the mystery man will unlock the vault. When an entertainer and his dancing girls hear of the plot, they attempt to flee but are chased and soon run into Joe and tell him everything. After picking off their pursuers, Joe follows the gang, staying out of sight - even as the they murder everyone on the train to cover their tracks.

Using only his knife and his cunning, Joe takes out the train's guards left behind by Duncan and safely returns the train and all of the money to the townsfolk. Knowing Duncan and his nature, the people in the town realize they don't stand a chance against him. As Joe is the only capable fighter, they ask him to wage a one-man war against Duncan and his armed posse who will do anything and everything to recover the money they're owed - which suits Joe just fine as he has a few tricks up his sleeve and is ready to enact his own brand of vengeance. 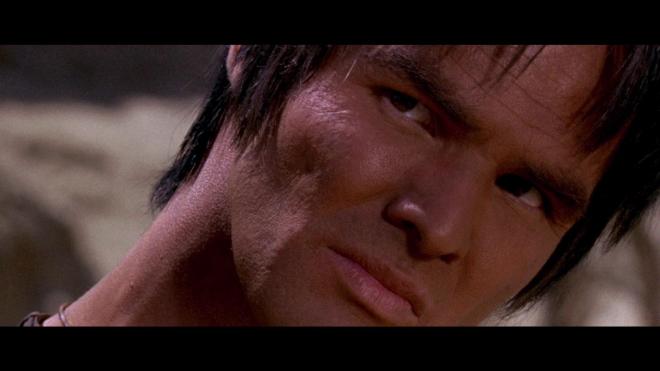 Years ago I saw 'Navajo Joe' on cable TV. I'd heard it was a solid film and one of Tarantino's favorite Spaghetti Westerns, but I'd also heard that Burt Reynolds detested the film saying that it was "so awful, it was shown in prisons and airplanes because nobody could leave." With those dual perspectives at play, I didn't really know what to expect. While I can understand Reynolds point of view (more on that in a moment), I have to side with Tarantino on this one - 'Navajo Joe' is one hell of a great Western, let alone a Spaghetti Western. The action is swift and intense. The good guy is appropriately gruff, mysterious and exceedingly tenacious towards his personal vendetta while the villain is unapologetically pure evil. It also features another fun and wild score from Ennio Morricone!

If you're going into this movie for pure fun, it delivers on that scale. If you're looking for some intricate plotting with clear character motivations, this probably isn't the best movie. 'Navajo Joe' is a movie you just let be. Produced by Dino De Laurentiis and shot in Spain, 'Navajo Joe' makes a great effort to crib the best elements from films like Corbucci's own 'Django' film and Sergio Leon's 'Man With No Name Trilogy,' while also still trying to carve out it's own signature style. Reynolds makes a fine hero, so much so that had this production been more to his liking, it would have been a great recurring role for the actor. Apparently this shoot was absolute hell for Reynolds. As a former stuntman he took great issue with the hazardous and loose safety issues during big action scenes to the point that he oversaw a lot of the shooting of these stunts, and there's also a story out there where Reynolds was apparently driven out into the middle of nowhere by Sergio Corbucci and left there because Corbucci wanted to see if he could make it back on his own!

As a piece of entertainment, I found 'Navajo Joe' to be a gas. It's just entertaining to see one man wage a personal war against an army of 30 or more well-armed bad guys. I also have to mention Ennio Morricone's score one more time, it's just that good. It may not rival his efforts on 'For a Few Dollars More,' or 'The Good, The Bad, and The Ugly' for that matter, but it's definitely impressive how the man uses various instrumental themes and layers them with choral accompaniments and sound effects. In case you feel like you've heard this score already, chances are you have. It was featured throughout both 'Kill Bill Vol.1' as well as 'Kill Bill Vol. 2.' At just 93 minutes, 'Navajo Joe' serves up some thrilling entertainment that just about every Western genre fan should enjoy.

'Navajo Joe' arrives on Blu-ray thanks to Kino Lorber and their Studio Classics line and is pressed on a BD25 disc. Housed in a standard case, the disc opens directly to the main menu.

The last time I saw 'Navajo Joe' it was on one of the "HD" movie channels on my parent's satellite system. While I loved seeing the movie again, that image's waxy DNR infused look had me disheartened for any upcoming Blu-ray release. Thankfully, Kino Lorber did not use that master! Film grain has been retained leading to some very strong and beautiful detail levels. Colors are bright and leap off the screen with some lovely pop to them - especially the color red! Likewise, black levels are very strong with only a couple instances of crush. A few scenes look like they were intended to be shot "day-for-night" and didn't process well so film grain can look a bit noisy, but there are only a couple moments like that. The print is in overall decent shape with only some slight speckling here and there and some thin scratches that are difficult to even notice. The only other problem area worth mentioning is that It appears that some edge enhancement has been employed here and there. While this image can look a bit "crunchy," it's also light years ahead of that flat and waxy transfer I saw years ago and far better than the previous DVD release.

Rocking a DTS-HD MA 2.0 track, 'Navajo Joe' is an auditory delight. Part of the reason I love Spaghetti Westerns is the audio mixing. Since Italian productions rarely ever record audio on set, voices are usually dubbed in later along with all of the sound effects and music. The results tend to be a lot of fun as each horse hoof clap gets its own track, gunshots have a heightened reality to them, and the music track can have a life of its own. All of this is true for 'Navajo Joe.' The dialogue is crisp and clean and is never a struggle to hear, sound effects have plenty of punch, and Ennio Morricone's score has a wonderful presence and power behind it. Without any kind off age related hiss or drop outs, this is a great track for a fun movie.

Audio Commentary: Film Historian Gary Palmucci offers up a lot of insight and detail about the film making it a fun and informative track.

Gator Trailer: (HD 1:09) Reynolds narrates the trailer and it makes it look like a nice cheesy good time.

Note:  The artwork for the disc indicates that a trailer for A Reason To Live, A Reason To Die would be included but apparently it didn't make the final cut.

'Navajo Joe' is just one of those wildly entertaining Spaghetti Westerns that relies on simple storytelling, a strong performance from it's lead hero and villain and features some slick music. Burt Reynolds may hate this movie, but I loved it. Fans of the film should be happy to hear that this Blu-ray release from Kino Lorber is a pretty solid effort for a catalogue release. The Image quality is pretty good, the audio is great and it features an informative and entertaining commentary track. I'm calling this one recommended.