In 1903,in Cornwall,a group of locals discover an underwater city, dating back to 1803, that hides a society of smugglers and aquatic creatures.

Screen legend and icon of horror Vincent Price stars as the leader of a bizarre cult of human immortals in 'War-Gods of the Deep,' a particularly fascinating piece of fantasy schlock not often mentioned in Price's impressive and somewhat intimidating film canon. This isn't due to Mr. Price, of course, because, as usual, he delivers a captivating performance as a man who rules over a large group of bearded men with an iron fist. As the gentleman pirate Sir Hugh, regularly referred to as The Captain by the other well-dressed buccaneers, Price keeps the others in line and in fear with his familiar menacingly deep voice and trademark sinister glower — his face showered with just the right amount of shadows to make his nose pointier than usual as he hollers commands with distinct articulation in every word to sound especially threatening. As always, Mr. Price is a delightful charismatic screen presence and the overall production is wildly imaginative, but the problem is an enthusiastically strange plot involving an underwater city with mermen, a volcano and chickens.

In other parts of the world, this low-budget sci-fi B-horror flick is known as 'City Under the Sea,' which is also the film's original title taken from one of Edgar Allan Poe's lesser appreciated poems, "The City in the Sea." As if often the case with many of the horror movies of the period claiming to be adaptations of Poe's works, the production actually has little to do with the original poem other than maybe being very loosely inspired by it and Mr. Price reciting a few lines from the Gothic rhyme. From that perspective, the film fits neatly in the series of Poe adaptations starring the incomparable Vincent Price which were trendy in the 1960s and into the early 70s. But in truth, the name and loose association with that fad was pure marketing meant to capitalize on the popularity of the Corman-Poe cycle of movies. Also, the script by Charles Bennett ('The 39 Steps,' 'The Man Who Knew Too Much,' 'Sabotage') and Louis M. Heyward ('Planet of the Vampires,' 'Witchfinder General') took more inspiration from the period fantasy productions by Disney and less from Poe's dark tale about Death. 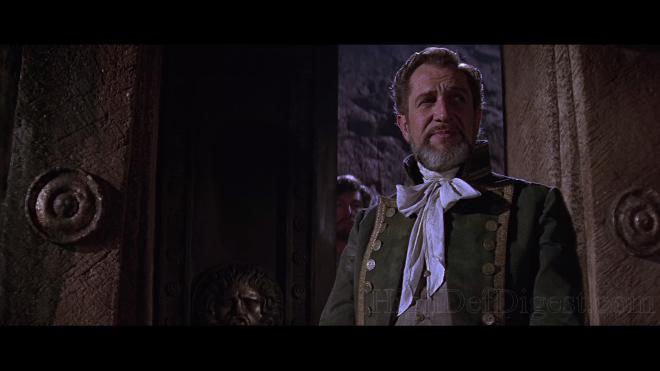 Added to that, the movie that went to cinemas in 1965, the same one before us now, was not the original story penned by Bennett, but the result of heavy rewriting by Heyward. Price's character pitted against an American professor Ben Harris (Tab Hunter), who's searching for the kidnapped Jill Tregillis (Susan Hart) in the underwater city, was always central to the mystery, which is sadly pretty nonsensical. It has something to do with the pirates' immortality as guardians of the ancient structure and the mermen living in it, but Hugh and his men want a cure to their cursed gift and live again on the surface before an undersea volcano erupts. Heyward's contribution was the out-of-place humor lurking beneath much of the dialogue and the various character interactions. And much of this comes by way of the normally funny David Tomlinson ('Bedknobs & Broomsticks,' 'Mary Poppins') as the bumbling doofus Harold Tufnell-Jones, who's made to lug around a chicken in a picnic basket for no other reason than he can. Occasionally, this leads to a couple amusing gags, but otherwise, there is little to almost no point for the character or his unexplained love for his feathered companion.

Probably the most surprising aspect of 'War-Gods of the Deep' is seeing the name Jacques Tourneur attached as director and having this be his final film — he retired after this movie and passed away the following decade. The French filmmaker is best known for helming many film-noir, westerns and horror favorites, such as 'I Walked with a Zombie' and 'Night of the Demon.' However, his greatest contribution to cinema can be seen with the immensely influential classics 'Cat People' and 'Out of the Past.' Working with the talented cinematographer Stephen Dade ('Zulu'), Tourneur brought some of his talent to this production, giving the silly story some sense of danger and drama in the camerawork and movement. Unfortunately, even with his talented eye and allowing Price chewing up the scenery — his reaction to the chicken is oddly expected and funny — there is very little that could be done to save a strange story where mermen battle it out with other men in deep sea diving uniforms and be taken remotely serious.

Kino Lorber brings 'War-Gods of the Deep' to Blu-ray on a Region A locked, BD25 disc inside the standard blue keepcase. At startup, viewers are taken directly to a static main menu with music.

The war gods come out from their watery confines and are appeased by an excellent 1080p/AVC MPEG-4 encode that truly shines. Reportedly struck from a remaster of the original elements, the favorite sci-fi B-horror flick has never looked better, showing that the source has aged very well with damage. Occasionally, white specks, dirt and minor scratches rear their ugly heads while several composite shots appear poorly resolved, which are easily forgiven for their age and photography.

For a majority of the runtime, the 2.35:1 image comes with outstanding contrast and brightness balance although there are times when whites are a tad too bright and expose negligible hints of noise. Still, blacks are fairly deep with excellent visibility of the shadow details, providing the transfer some appreciable dimensionality, while a thin layer of grain gives the presentation a welcomed film-like appeal. The palette favors more browns and earth tones, yet secondary hues seem somewhat washed-out and finite. On the other hand, reds are surprisingly bold and vibrant. Fine lines and objects are noticeably detailed with sometimes stunningly sharp definition in the clothing, the stone walls in the background and the fancy stone carvings faces are quite revealing with good flesh tones.

The city under the sea and the chickens not of the sea attempt to escape disaster with a strong and generally satisfying DTS-HD MA mono soundtrack that in the end, does the movie justice.

However, the lossless mix, as a whole, feels limited and much too uniform, failing to really give the on-screen action some breathing room. Of course, much of this can be chalked up to the original sound design and any limitations associated with the original elements, but even with that in mind, there doesn't appear to be much range between the various frequencies. Everything is perfectly contained in the mids, creating a mostly flat presentation lacking some weight and heft in the low end while the upper ranges expose small hints of distortion. On the plus side, background activity is perceptible, adding a bit of depth, and dialogue reproduction is excellent and intelligible throughout.

Although 'War-Gods of the Deep' is not widely remembered in Vincent Price's filmography, the low-budget sci-fi B-horror flick nonetheless allows the icon of the genre some memorable moments, coming out of this schlock mostly unscathed and awesome as ever. However, the plot is simply too odd and silly to make the production truly notable, in spite of a story written by Charles Bennett and being directed by Jacques Tourneur. The Blu-ray arrives with a shockingly excellent picture quality but a mostly average audio presentation. With only one supplement offered, the package might not tempt many, but those familiar with the movie will be quite content with overall results.