In 1870s America, a peaceful American settler kills his family's murderer which unleashes the fury of a notorious gang leader. His cowardly fellow townspeople then betray him, forcing him to hunt down the outlaws alone.

Every now and again a movie feels the need to buck conventions and become something new in order to reinvigorate a sagging genre. That need to be new and exciting is understandable but at the same time by not delivering on audience expectations a filmmaker can run the risk of alienating an audience. Thankfully 'The Salvation' from Danish film Director Kristian Levring doesn't try to reinvent the wheel and still maintains a sense of freshness and excitement for what could be cast aside as another revenge Western.

Jon Jensen (Mads Mikkelsen) and his brother Peter (Mikael Persbrandt) are former soldiers who have made their way to the United States of America after their native Denmark suffered a crushing defeat from the German army. After seven years of tough work, Jon has sent for his wife Marie (Nanna Øland Fabricius) and son to join him at their new home in the untamed wild west. What should have been a joyful family reunion quickly turns into Jon's worst nightmare when a recently released criminal Paul Delarue (Michael Raymond-James) and his associate board the same stagecoach as Jon and his family.

When Paul assaults Jon's wife and threatens his son, Jon does everything he can to protect them but is outmatched and outgunned. Throwing Jon to the dust, Paul and his associate kill the stagecoach driver and ride off towards the horizon leaving Jon to run after them as fast as he can. When Jon finally catches up to the stagecoach, he discovers the worst has already happened. After procuring the coachman's castoff rifle, Jon delivers a final and brutal form of justice to the two men who killed his wife and son. Believing the worst moment of his life to be over, Jon along with Peter, aim to sell their land and move further west to California. Little did Jon realize that every bastard has a brother.

Henry Delarue (Jeffrey Dean Morgan) is the local heavy in the town of Black Creek. Not only does he extort cash payments for protection from the citizenry, he's also rendered Sheriff Mallick (Douglas Henshall) and his ill-equipped deputies useless. He's also in a scheme with Mayor Keane (Jonathan Pryce) to buy up the land around the town at depressed prices for outside investors. At the word of his brother's murder Delarue literally holds the entire town hostage. He gives Mallick just a couple of hours to find his brother's killer or find two replacements to fit the bill or he'll kill four people of his choosing. After reneging on the deal and taking additional lives of the locals - Delarue increases the costs of protection until the true murderer of his brother is found. Unfortunately for Jon, a simple stop at the local trading post proves to be a disastrous choice.

After being found out, Jon is taken by Delarue to see Paul's mute widow Madelaine (Eva Green) before they string him up by his wrists and leave him to the elements where they aim to beat and torture the man to a slow and painful death. After Peter manages to free Jon, the two men must find a way to get clear of Delarue and his band of murderers. Jon knows only too well that the best way to answer a bullet is with two shots of his own. 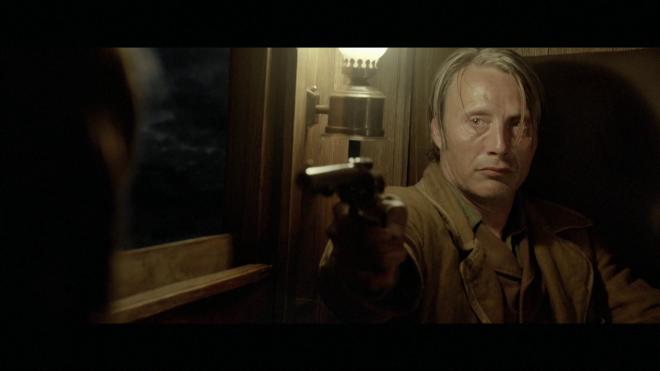 Take the third act revenge elements from Clint Eastwood's 'Unforgiven,' stir in a little 'A Fistful of Dollars' and a dash of 'Rio Bravo' and you have the essence of 'The Salvation.' By borrowing elements from these genre classics, 'The Salvation' proves to be an entertaining Western that manages to stand on its own two feet. While the movie may become a bit predictable, it is none the less a thrilling film. With Mads Mikkelsen as the reluctant hero and Jeffrey Dean Morgan as the archetypal villain, you get a dynamic that has some flash and style without taking away from story conventions that have come before. By contrast, you have a film like 'Saraphim Falls' that was a pretty by the numbers but fun revenge Western that all of a sudden felt the need to get metaphysical right at the end in search of some sort of deeper meaning to the story. While there is a slight element to that with 'The Salvation' and the closing credits imagery, it thankfully doesn't completely upend the film in such a dramatic way. You may know how this film is likely to end, but seeing how Jon enacts his brand of vengeance is what makes 'The Salvation' worth the journey.

In the Pantheon of Westerns, 'The Salvation' probably rests just above average. By playing to genre expectations, it wasn't crushed under the weight of its own sense of self-importance. Written by Anders Thomas Jensen and co-written by Director Kristian Levring, the film doesn't have a looming pressure to outdo what has come before. All it has to do is be something worth watching. While the story itself isn't entirely unique, I would say it's the actors who bring their own fiery brand to the film. It's interesting to see a Western about immigrants attempting to make their way in a new country and I also appreciate it because of my own Danish ancestry. It wasn't too long after the time period that this film takes place in that my own relatives made their way across the pond and settled in the midwest. While I'm pretty sure their journey was relatively uneventful, I dug that this film put that spin on an old trope and gave the film a fairly unique perspective. Also, it's fun to see Eva Green play a mute role. She's always had a communicative and expressive presence and she manages to bring a lot of weight to her role of Madelaine without saying a word.

'The Salvation' may not be the best or even the most original Western ever made, but it does everything that a good Western should. It has strong actors playing great characters with a solid premise. Now for those unaware of this film's existence, do yourself a solid favor and don't watch the film's trailer. Some of the initial disappointment I felt about this movie comes from the fact that the trailer gives away most of the third act. I am trying really hard not to fault the film for a bad marketing campaign but to say the trailer has a spoiler or two is a bit of an understatement. While I loved the movie and encourage Western fans to see it, but if you're unsure about it, you're just going to have to take my word for it and rent it at the very least. You don't want to watch that trailer that's out there.

'The Salvation' arrives on Blu-ray thanks to MPI Media Group and is pressed on a Region A locked BD50 disc. Housed in a standard case, the disc opens to trailers for other MPI releases before reaching the main menu.

With South Africa doubling for the American southwest, 'The Salvation' is a simply beautiful 2.40:1 1080p image to enjoy. Colors are bright and vibrant. There is a persistent golden hue to the film given the desert surroundings, but the color scheme doesn't appear to have had much of an effect on flesh tones as everyone has their own distinct look and can either appear appropriately pale or tan and avoids appearing too orange or too teal. Detail levels are spectacular with the film's intricate production design and costuming, there is a lot to see and appreciate in every frame. Black levels, for the most part, are rich and inky giving rise to a fantastic sense of depth. Where things get a bit touchy is with some of the purposeful color grading to make some day for night shots appear darker than they naturally are. During these moments there is a fair bit of crush and some of the detail is lost, but thankfully there are only a couple scenes that appear this way leaving the vast majority of the film to look absolutely amazing.

'The Salvation' gets a lot of mileage out of its DTS-HD MA 5.1 audio track. Ambient and atmospheric sounds like horse hoof clops and the sounds of dust and grit swirling around in the wind get a lot of presence and round out the surround channels in any given scene. Dialogue is crisp, clean, and front and center as they should be. Imaging is a delight as there is always something to hear, but the real gem of this mix are the film's numerous gunfights. There is the initial booming crack that comes from each shot, but then there is a nice eco trail as the sound is lost into the expansive scenery. Levels are just fine here as you can hear and appreciate Kasper Winding's score, the actors' dialogue and the sound effect elements without having to ride your volume button. Also included on this disc is an English LPCM 2.0 track. This track is pretty good and maintains a nice sense of imaging and presence, but given that it isn't a true surround track it is noticeably flatter feeling and a bit hollow in places as if some of the background atmospherics didn't transfer over. A decent track, but if you have a choice, stick to the DTS - it's the real breadwinner of this Blu-ray.

Interviews: (HD 46:00) Co-writer Anders Thomas Jensen as well as cast members Mads Mikkelsen, Jeffrey Dean Morgan, Douglas Henshall, Eva Green, and Nanna Øland Fabricius talk about the film, the production, their roles and the experience shooting. It's okay material, very EPK feeling and it can get a bit redundant after a time since it feels like a lot of the same material gets covered but by different people.

Behind The Scenes: (HD 7:15) Childhood Dream, Guns, Horse Riding, Man With Cigar, Building The City, Western Genre - this is a bunch of very brief promotional EPK features that are strung together. You get little more than a minute with each topic of the film's production and is decidedly lacking.

Trailer: (HD 2:22) This is the trailer that I mentioned previously. Don't watch it until after you've already seen the movie!

I love a good Western. Heck, I even enjoy a bad Western, but something about seeing a movie that is so well put together with an earnest intention to entertain makes me happy. 'The Salvation' may not redefine a genre, but then it never had to in order to be a good film. With a stellar A/V presentation, the only thing that's keeping me from recommending this film better is the very lacking bonus features. That said I'm still calling this one as recommended.

Sale Price 22.99
List Price 29.98
Buy Now
3rd Party 16.24
In Stock.
See what people are saying about this story or others
See Comments in Forum
Previous Next
Pre-Orders
Tomorrow's latest releases