In Season 4 of AMC's top-rated drama, Hell freezes over. Following the brutal winter of 1868, the railroad is at a standstill and restless workers wreak havoc on Cheyenne. Cullen Bohannon is trapped in a fort with a pregnant wife and the Swede. Thomas Durant is broke and Elam Ferguson is presumed dead. The task of uniting America by rail remains undone and the costs and consequences are rising, for everyone.

"There are some men that need killing."

When a TV series gets into the third season, it should have a pretty clear idea where it's headed. Presumably by this point it has won over an audience and established enough goodwill with the airing network that it can push some boundaries here while pulling on some plot strings to keep things interesting and entertaining for its audience. By the time the fourth season comes around, it should be a well-oiled machine that knows how to build on the previous seasons while giving the loyal viewers an idea where things are going. Four seasons on and 'Hell On Wheels' knows how to maintain its status as an entertaining show - even though it's path forward remains unclear.

Doc Durant (Colm Meaney) is moving his Union Pacific railroad west - at any cost. Even in the dead of winter, his railroad must maintain it's westwardly movement or all will be lost. After a disastrous loss of materials and equipment that happened as a result of an engine falling into a frozen lake, Doc is stuck in Cheyenne longer than he ever intended to be. Even with Mickey McGinnes (Phil Burke) elected as mayor of the city, Doc is having a hard go of things. He needs the best railroad man he's ever had back on the job. He needs Cullen Bohannan (Anson Mount) back, only everyone believes him to be dead.

After being Shanghaied by a group of Mormons led by the mad Swede (Christopher Heyerdahl), Cullen is stuck at Fort Smith building a well as his penance to God. While he may not be allowed to leave, life isn't hard for Mr. Cullen. As a man on the path towards riotousness, the congregation has seen it fit that he be wed to sister Naomi (MacKenzie Porter) who is due to bare Cullen a child any day now. As Cullen and The Swede play their little ideological game of chess, Washington is becoming worried about Union Pacific's progress westward. As General Grant is all but assured to be the next President of the United States, he appoints John Campbell as provisional Governor in order to tame the wild western territory of Wyoming - in particularly Cheyenne and Doc Durant.

With the government backed carpetbaggers moving in, Doc is faced with resistance on two fronts. Not only are his crews having a difficult time blasting through the slate face of a mountain slope, he's also got pressure coming at him from Campbell and his goons who abuse the rule of law to enforce their own brand of justice. After sidestepping The Swede and securing his, Naomi's, and their son's freedom, Cullen returns to see the railroad move forward. On top of dealing with the new politics of the situation and caring for a new wife and son, Cullen is going to be faced with the appearance of a murderous former fellow Confederate Army soldier Sydney Snow (Jonathan Scarfe) as well as the return of the long lost Elam Ferguson (Common). Even with these issues, a looming shadow in the form of Morman leader Brigham Young (Gregg Henry) rises over the horizon along with with a rival railroad team. 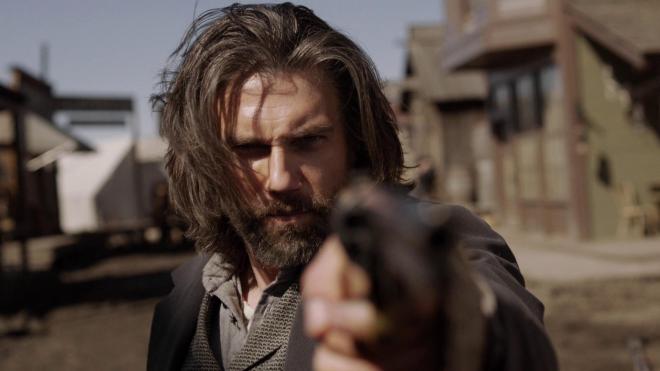 I've had a bit of a love/hate relationship with 'Hell On Wheels' these last few years. On one hand it's an incredibly well-executed show that brings the Western back to television in fine fashion, but on the other hand there is this part of me that hates how this show will likely see a true finale finish while 'Dead Wood' ended unfinished. In spite of my personal gripes about how a show goes out, 'Hell On Wheels' is a hell of a great bit of entertainment. Four seasons on and Anson Mount's Cullen, Colm Meany's Doc, Kasha Kropinski's Ruth, Phil Burke's Mickey, Christopher Heyerdahl's The Swede and Robin McLeavy's Eva have carved this show into a slick machine that runs on two rails. It makes the presence of newcomers like MacKenzie Porter, Jake Weber, and especially Gregg Henry all the more exciting and the exit of certain characters all the more tragic. This is a show that is ultimately about losses and gains. For every bit of progress, something is lost in the process. As the railroad moves forward, the endeavor of will and engineering may prove to be a Pyrrhic victory for those struggling to build it.

This is where I love fictional shows that seat themselves in the realm of actual history. With characters that are based of real life counterparts, it's fun to imagine these individuals that most people only have read about in small excerpts out of school text books inhabiting this rough and tumble world. While absolutely fictional, shows like 'Hell On Wheels' provide just enough real history to maintain a sense of believability and at the same time still find new ways to surprise people. Where Season 4 is a lot of fun is with the arrival of Jake Weber as the real life first Governor of the Wyoming Territory playing a political heavy that has the backing of the United States' Government. That kind of power naturally would give any man a big head, and it's interesting to see where the show runners of 'Hell On Wheels' take the character this season while setting him up for bigger doings come Season 5.

As Season 4 of 'Hell On Wheels' concludes with the promise of more dramatic excitement, I can't help but worry that this show is starting to run out of steam. Granted the pending Season 5 has been slated to be the series' final season, however, there is a lot of ground to cover, not only for the train but the characters as well.  I want to see these characters come to fitting conclusions, rather than being rushed to a finish line. I can't elaborate on that point further due to a couple of major character spoiler elements, but those familiar with this season - especially the back-to-back gut-wrenching episodes 6 and 7 - will understand what I'm talking about.  Just the same, I look forward to digging into Season 5 as soon as it starts its run on AMC to see where these characters end up.

'Hell On Wheels' arrives on Blu-ray from AMC pressed on four BD50 discs. Housed in a four-disc case, each disc opens directly to the animated main menu. All extra features in this set are found on disc four along with Episode 13.

AMC continues its strong track record of releasing great looking Blu-rays with Season 4 of 'Hell On Wheels.' The 1.78:1 1080p image is absolutely stunning. Detail never falters as it offers some magnificent looking close-up, middle, and wide establishing shots. You can see and appreciate every intricacy of the impressive production design while also enjoying the beautiful Calgary landscape where this show is filmed. Depth is very impressive and can appear to go on for miles. The only time depth is affected is when there is some CGI enhancement of the scenery. When those moments crop up the image can appear a bit flat. Otherwise, this is a beautifully dirty looking show that makes the combination of blood, guts, and mud appear awful pretty.

Each episode of Season 4 of 'Hell On Wheels' is given an impressive and resonate English DTS-HD MA 5.1 audio track. Dialogue is kept to the center/stereo channels while surrounds are given the ambient background noises and atmospheric effects. To that end, imaging is very impressive as the pounding of hammers, the chugging of the train engine, and the foot falls in mud have a wonderful presence to them. Levels are well balanced and keep to the midranges. The season is fairly conversational and quiet for the most part but when the action beats kick in and guns start firing, the mix has a great power and never falters. You also shouldn't have to ride your volume buttons as the season progresses into more exciting and decidedly louder territory.

A Look At Season 4: (HD 3:12) This is a quick, behind the scenes look that introduces the themes and ideas of Season 4.

The New Characters Of Season 4: (HD 3:24) The fresh faces of Season 4 get their due introductions as cast, writers, and producers talk about relationships and their roles these people will play in the larger scheme of things.

Cheyenne Set Tour: (HD 4:27) Producer/Star Anson Mount and Art Director Bill Ives give an all too brief tour of this impressive set. This thing easily could have been an hour long as the location is a character unto itself.

Anson Mount Retrospective: (HD 1:40) Mount talks about his character's journey through the seasons to the point that we find him at the beginning of Season 4.

On The Set With Colm Meaney: (HD 1:10) A short behind the scenes EPK style look at Meaney and the character he plays.

On The Set With Jake Weber: (HD 1:16) Another quick EPK style behind the scenes interview segment with the series newcomer.

Inside Hell On Wheels Featurettes: (HD 1:05:09) A collection of 14 individual featurettes that cover all of the big character moments and events that happen throughout the season. The Elusive Eden, Escape From The Garden, Chicken Hill, Reckoning, Life's A Mystery, Bear Man, Under The Color of Law, Two Trains, Return to Hell, Bleeding Kansas, Thirteen Steps, Further West, Making-of Further West. You have the option of watching them individually or through the play all function

Season 4 of 'Hell On Wheels' proves that there is a lot of life left in the show, but at the same time - it needs to start charting a course for its end game. While the show remains entertaining and engaging, it stands in a precarious place of becoming redundant. While the story progress may be a bit unclear given that Season 5 is the projected finishing season, thankfully this Blu-ray release is a fine set of discs offering rock solid Audio and Visual presentations with a host of fun and informative extras adding a significant value to the set. If you're an established fan of the show, you should be more than pleased with this release. Highly recommended.

Sale Price 19.6
List Price 22.98
Buy Now
3rd Party 14.42
In Stock.
See what people are saying about this story or others
See Comments in Forum
Previous Next
Pre-Orders
Tomorrow's latest releases