Bessie offers an intimate look at the determined woman whose immense talent and love for music took her from anonymity in the rough-and-tumble world of vaudeville to the 1920s blues scene and international fame. Capturing Bessie's professional highs and personal lows, the film paints a portrait of a tenacious spirit who, despite her own demons, became a celebrated legend. Throughout the years, Bessie Smith has served as an inspiration for such illustrious singers as Billie Holiday, Aretha Franklin, Janis Joplin and Nina Simone, among others.

The biopic is a fairly straightforward, formulaic genre. It has to be. You have to watch a well-known individual that most of the movie-going populace is aware of, rise from obscurity, fail at a dramatic moment during their respective careers, and then see that person rise again like a phoenix from the ashes. The reason why Biopics are formulated this way is because it works. No one wants to see a good guy be happy, stay happy and remain happy. Just the same, no one wants to watch a guy be a jerk for two hours. HBO's Queen Latifah starring biopic 'Bessie' about the life of Blues legend Bessie Smith certainly adheres to formula but it's still a refreshing and soulful look at a complicated woman at a dramatic time in American history.

The 1920s were a roaring time. The stock market was on the rise, people were getting rich off bootlegged liquor, and the prevalence of radio sets allowed for people to gain access to new kinds of music. As Jazz was taking off in big cities like New York and Chicago, southern cities like Memphis and Atlanta became the hotbeds of Blues. Beautiful soulful tunes that were sung to the heart of a person's plight with rich sensual melodies filled the airwaves. Bessie Smith (Queen Latifah) and her brother Clarence (Tory Kittles) are rising stars busking on the vaudeville circuit by doing popular show tunes and original Blues tunes. While they put on a good show, they're often jilted by theater managers when it comes time to collect what cash they're owed for their honest and hard work. A chance viewing of the famed Ma Rainey (Mo'Nique) will set Bessie on the path to fame and fortune.

After jumping aboard Ma Rainey's private train and forcing her way onto the show, Bessie begins to hone her Blues act. As Ma tells her "The Blues is not about people knowing you, it's about you knowing people," Bessie gets to know the people very well and very quickly. It isn't long before Bessie starts to take center stage and her powerful and beautiful voice starts to overshadow Ma Rainey's. At the same time as Bessie is improving herself, she takes on numerous male and female lovers and is having a harder and harder time putting down the moonshine. When Ma confronts Bessie about her behavior on and off the stage, Bessie takes it as an opportunity to sever their partnership and strike out on her own.

As Bessie's own traveling show grows in popularity, it isn't long before she's married her manager Jack Gee (Michael Kenneth Williams) and Columbia Records has offered her a contract. Even with the successes of her new life shining bright, Bessie can't hide from her abusive past involving her sister Viola (Khandi Alexander), and try as she might, she can't kick her alcohol problems - especially when she starts seeing bootlegger Richard (Mike Epps) on the side. When the Great Depression hits and threatens to take away everything she's built, Bessie will have to find the spark within herself that will shine the way to a better future than the self-destructive life she's been leading. 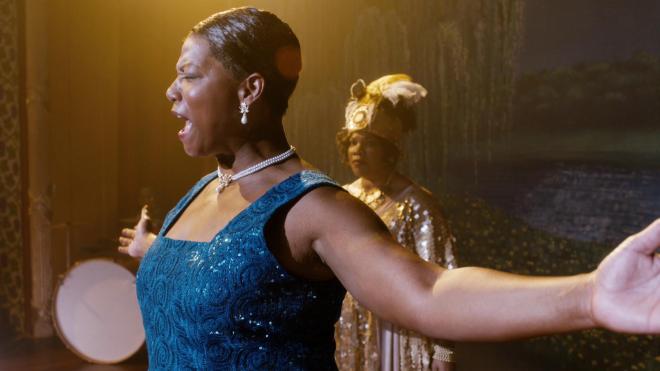 'Bessie' is a movie that has been over 30 years in the making. As far back as the 1970s, this film has been actively in production. Just when her career was on the rise, Queen Latifah was offered the chance back in 1996 to play Bessie Smith. 20 years later the film has finally been made by writer/director Dee Rees and released by HBO. Was all of the time and the numerous rewrites and stalled starts worth the effort? I would have to lean to yes. 'Bessie' isn't a perfect film by any stretch, but it often proves to be a soulful one. Bessie Smith was a complicated woman. As an openly bisexual African American woman in the 1920s, opportunities to succeed were slim to say the least. The fact that she succeeded at all is impressive, but the thing to admire is that so many of her recordings have been archived and are easily accessible to this day. While the scene of Bessie making her first recording may be a bit comical because of the crude technology of the time, it is impressive just the same.

For a biopic, 'Bessie' is a fairly paint by the numbers affair. Even if you're unaware of Bessie Smith, her music, or her life, you shouldn't have any trouble seeing the plot points a mile down the line. Some of the plot points may be up for some historical debate, but in the context of a two-hour movie, they work to tell a compelling story. For everything that happens to the woman during her life, a four-hour mini-series would have done the material a lot of justice. That said, the story wouldn't be worth a thing if it weren't for the impressive performances.

Queen Latifah absolutely kills it as Bessie Smith. Latifah is at all times smart and sassy, shrewd and conniving while also being loving and vengeful. At her right side is Tory Kittles as her loyal but exhausted brother Clarence and on her left is Michael Kenneth Smith as Jack; both men work as an angel and a devil on Bessie's respective shoulders. And then you have Mo'Nique as Ma Rainey. If there was someone who very nearly steals the entire show it's Mo'Nique. As absolutely amazing as she is here, it's also a sad reminder how little the woman has worked after her Oscar win for 'Precious.' Probably the best moment of the entire movie is when Latifah and Mo'Nique sing a duet of 'Black Bottom' together. Considering Mo'Nique earned herself an Emmy nomination for her efforts, maybe there is hope we'll see a Ma Rainey biopic sometime soon?

'Bessie' was a movie I'd heard about being caught in development hell for years. As far back as my film school days, I'd heard of the film possible setting up shop and getting underway only to learn it had fallen apart once again. Perhaps it's a bit like Kevin Spacey's 'Beyond the Sea' in the way that it became a passion project for Queen Latifah. At any time over the last twenty years, she could have dropped out of the project and just put the material behind her, but she didn't do that. Persistence finally payed off and the final film was worth the wait. It may not blow everyone's hair back, but it is without a doubt an earnest undertaking that should be commended on every front. If you're ready for some fantastic performances, solid production values, and beautiful soul music, 'Bessie' is out now on Blu-ray and a release you should keep on your radar.

'Bessie' arrives on Blu-ray thanks to HBO films on a single Region A locked BD50 disc. Housed in a standard case, the disc opens directly to an animated main menu. Also included is an Ultraviolet Digital Copy voucher for the film.

As with most HBO releases on Blu-ray, 'Bessie' scores big with its immaculate 1.78:1 1080p presentation. Shot digitally, every frame of the movie offers a lot of visual eye candy to appreciate. From the back allies of the vaudeville theaters to Ma Rainey's opulent train to the depression era streets, detail levels show all of the grit, grime, and beauty of the 1920s and early 1930s. Colors have a lot of pop and presence throughout, particularly golden hues, as well as blue and green primaries. Black levels are impressively strong as much of the film takes place at night and maintains an effective three-dimensional feeling. Even when characters are wearing dark clothing, the film never has a problem with shadow separation or crush issues. The only real tough area for this film is when some color grading has been employed to evoke a dramatic character shift. These moments have a tendency to flatten the image and at the same time strip out a lot of the finer details. Thankfully these moments are few and don't really drag the score down much, but were worth mentioning just the same. All around this is a fantastic transfer.

When you have some of the best Blues music being performed by someone of incredible talent, naturally a strong audio track is expected. This Blu-ray release of 'Bessie' has a pitch-perfect English DTS-HD MA 5.1 audio track working for it. Dialogue is crisp and clean and is never a problem to hear. This point is especially important given the film's numerous musical numbers where audience cheers and applause could potentially crowd out the music. Thankfully that doesn't happen and you can easily sit back and enjoy Queen Latifah's fantastic musical abilities. With that in mind, imaging is also a real winner here as well. There is plenty of ambient and atmosphere effects to keep the quiet moments engaged, and when the music numbers kick in, the surrounds are constantly being used to signal the crowd's approval. Levels are also nicely balanced keeping in the midranges without any sudden drops or spikes in the mix. An absolutely solid audio track.

Bessie: A Creative Journey: (HD 18:35) This feature is a fantastic look at what went into making this movie. When you see casting tapes of Queen Latifah dating back all the way to 1996, you can see why she was so right for the role. At just about 19 minutes, it's sadly very brief and I would have loved something more about the parts of Bessie Smith's life they didn't cover in the film.

'Bessie' proves itself to be a reliably entertaining biopic thanks in large part because of the amazing performances from Queen Latifah and Mo'Nique. Although pretty standard and predictable, I dug the story's earnestness and the amazing classic Blues tunes peppered throughout the film. HBO has done a killer job bringing 'Bessie' to Blu-ray with an absolute first-rate A/V presentation. Extras are a bit skimpy, but I'm still calling this one as recommended.