Directed by Elliott Lester from a screenplay by Frederick Mensch, 'Nightingale' is a provocative drama that probes the darkest corners of a disturbed mind, as a war veteran begins to unravel thread by thread. This searing story of solitude and isolation offers a poignant look at how life has failed one man.

"A moment of clarity is the greatest gift we are given on this planet."

Watching someone steadily lose their mind can prove to be the source for some gripping cinema as there are many ways you can watch this happen. Someone could be emotionally and physically scarred by an incident that propels their downward spiral. In another instance, someone could be obsessed with a goal or a task to the point that the lose their sense of humanity. While these kinds of films aren't always entertaining given their subject matter, they are a strong reminder of human fragility. 'Nightingale' starring David Oyelowo is just such a film, but by its nature, a film may not have been the best medium for this material.

For Peter Snowden, life has become a mundane routine of getting up in the morning, making breakfast for he and his mother, and then going to work. Rinse, wash, and repeat. But all of that is about to change. As Peter records his daily activities to his personal vlog, his living situation has vastly improved. Out from under his mother's domineering gaze, Peter is free to pursue the life he's always wanted to lead - including reconnecting with his old army buddy Edward.

Peter has gone out of his way to prepare the perfect dinner with Edward. After Peter left the army for various reasons and Edward re-enlisted, the two men drifted apart. After more than a decade, Peter and Edward ran into each other again and it didn't take long for their "friendship" to rekindle. Unfortunately for Peter, Edward was married and had two kids, and the constant presence of Peter's own mother meant that the two had to sneak around to "go to lunch." But all of that has changed, "Mother has moved out," only where Mother has moved to - no one else seems to know, other than Peter of course.

While Peter is busy redecorating, preparing a beautiful fish dinner, and getting his old espresso machine working, Peter's sister keeps calling, as do all of the people from church looking for Mother. Peter just cannot have these people interrupting his perfect night with Edward. In an effort to deflect their attentions elsewhere, he's spun any number of elaborate lies about his mother's whereabouts, but as it becomes clear that something terrible has happened. As the threads of his lies begin to be pulled apart, Peter becomes increasingly worried that Edward may never make it to dinner. 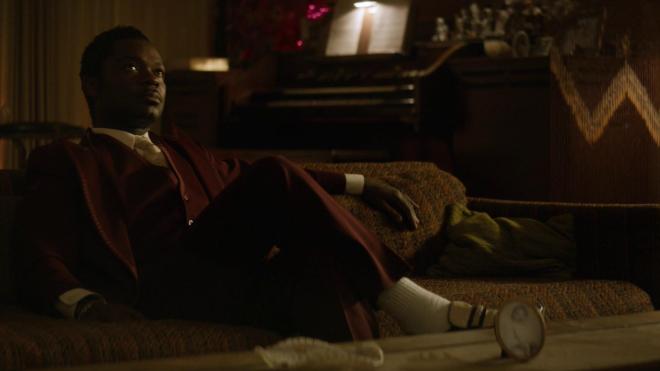 'Nightingale' features a tour de force performance by David Oyelowo. The film at its essence a one-man show and we the audience are left to watch his descent into self-delusion and ultimately madness. As the sole actor to appear onscreen, Oyelowo is a magnetic personality that equally attracts through his charms and honesty and at the same time repels by his uncontrolled actions. After a few minutes, it's very easy to see why the man was nominated for Outstanding Lead Actor in a Miniseries or a Movie at the 2015 Emmy Awards. He deserved it as apparently he didn't come out of character for the duration of the three-week shoot. Unfortunately, David Oyelowo is the only thing this film has going for it.

Given the vlog structure of 'Nightingale,' the personal diary format offers the audience one glimpse of the charmer and dreamer that is the public face of Peter Snowden. Once the camera turns off, his unchecked mania comes out in a violent and vitriolic form. It's because of this dynamic that I can't shake the idea that this material would have been better suited as a one-act stage play. On the stage, these breaks from talking to the audience and descents into madness could have worked a little more seamlessly. As a film, this material feels stretched too thin. Part of the problem for the material are the constant vagaries. While I tend to dislike movies that are on the nose, but at the same time I don't like being left to infer what has happened throughout most of the movie.

It's very clear early on what has happened to Mother. There is little guessing needed to fill in the gaps, but for the rest of the movie you're left questioning not only Peter's sexuality but his military experience as well. Did Peter experience something terrible and that is why he's in the condition that he's in, or is this a result of his societally, parentally, and religiously oppressed sexuality? Maybe a little bit of both? Or is this a statement of how technology and social media, in fact, isolates us and makes us incapable of maintaining strong relationships? Around the half way point for this movie, I became aware that this movie was trying to say a lot without really saying anything. While it may be a searing look at the process of mental erosion, the film really amounts to being an unfortunate "off his meds" cliche. At a swift 82 minutes, 'Nightingale' at least doesn't waste too much time with bloat, but as an honest look at mental illness it doesn't quite reach the bar it has set for itself, nor does it become a terrifying thriller along the lines of William Friedkin's 'Bug.' 'Nightingale' isn't easy viewing, but it is worth a watch for the incredible performance from David Oyelowo.

'Nightingale' arrives on Blu-ray from HBO Films and is pressed on a Region A locked BD25 disc. The disc is housed in a standard eco-friendly case and opens directly to the main menu. Also included is an Ultraviolet Digital HD voucher.

Considering that 'Nightingale' is comprised of multiple digital formats, the film's 1.78:1 1080p transfer. To that effect, the film looks very good on Blu-ray seeing as how it was shot with professional grade digital cameras, cell phone cameras, as well as computer monitor cameras to capture every aspect of Peter's mental slide. Obviously the material shot on professional grade equipment looks the best here as detail levels are nice and sharp allowing the viewer to take in all of Peter's personal aspects as well as the single set used throughout the film. When the film shifts to a portable camera device the film's image quality notably suffers due to the resolution aspects of the devices, but that isn't a fault of the transfer and more a result of artistic intent. All around the film offers a beautiful and stable color pallet with plenty of primary pop and strong black levels that gives the small home where Peter lives a wonderful sense of claustrophobia. Aside from some occasional softness, this is near a first-rate transfer.

'Nightingale' makes fantastic use of a powerful DTS-HD MA 5.1 audio track. Considering 90% of the track is actor David Oyelowo talking to himself or to his vlog camera, the film's audio mix is dynamic and keeps the surrounds engaged in subtle ways. Imaging for the most part if front/center loaded as to be expected, but when Peter begins to lose control, the surround channels kick in to great effect and the constant low tones and music notes from composer Mark Todd keep the track interesting. Levels are perfectly balanced, again because of the conversational nature of the film there isn't any need to keep watch of your volume levels. All around this is a fantastic audio track that serves the nature of this film perfectly.

Sadly, there are no available extra features on this disc. An interview with David Oyelowo would have been nice to see.

Watching someone slide down the rabbit hole is never an easy experience. Even watching it in movies or reading about it in books can be a visceral experience. 'Nightingale' features a single incredible performance from the film's lone actor David Oyelowo. As amazing as Oyelowo is in the movie, I can't help but feel that a TV screen isn't the most appropriate medium for the material and that it is perhaps better suited for the stage. It's certainly worth a watch for Oyelowo alone. HBO has put out a near perfect A/V presentation for this Blu-ray release, but the complete lack of any extra features is a shame. In the end, the movie is worth a rent.

Sale Price 20.92
Buy Now
3rd Party 49.95
In Stock.
See what people are saying about this story or others
See Comments in Forum
Previous Next
Pre-Orders
Tomorrow's latest releases