Ben Stiller and Naomi Watts shine in this fresh and insightful comedy from filmmaker Noah Baumbach. After Josh (Stiller) and his wife Cornelia (Watts) meet a free-spirited twenty-something couple (Adam Driver and Amanda Seyfried), they adopt a new lifestyle complete with hip-hop dance classes and mind-expanding parties. But with each hilarious attempt to act young, Josh and Cornelia start to appreciate the rewards of growing old together.

'While We're Young' opens with a rather lengthy excerpt from Henrik Ibsen's play The Master Builder where the main character Halvard Solness reveals to Hilde Wangel his pessimistic fear of the younger generation ruining everything he had accomplished in his life. The young woman speaks metaphorically that the successful architect should leave his doors open and unlocked to welcome the spirit of the youth in spite of his hesitation. In Ibsen's remarkable tale, Solness, inspired and encouraged by her zestful spirit, does as she requests, which tragically leads to his own demise. Although over a century old, the play speaks to a universal truth of reaching a certain age and realizing the young, with their new ideas and outlook on life, can feel both threatening and invigorating. And it's this strange dichotomy that fuels the shrewdly perceptive comedy-drama from Noah Baumbach, writer and director of the equally wonderful 'The Squid and the Whale,' the crowd-pleasing 'Greenberg' and fan-favorite 'Kicking and Screaming.'

Considering the opening, I would venture to suggest Baumbach's film is essentially a reworking of Ibsen's play, a brutally honest and subversively thoughtful portrayal of those same concerns still existing today. Ben Stiller's Josh is a modern version of Solness. Only, this time he's a middle-aged documentary filmmaker who's been having trouble completing his latest project after a decade. His marriage to Cornelia (Naomi Watts), the daughter of well-respected documentarian Leslie Breitbart (Charles Grodin), has also hit a minor rut over the years. We're not given the sense they're on the verge of divorcing, but after two failed attempts to conceive a child, the two have reached a plateau where life has become routine. Their best friends, Marina (Maria Dizzia) and Fletcher (Adam Horovitz of Beastie Boys fame), seem happy with their newborn and the direction life is taking them. But for our fateful couple, they're on the onset of a midlife crisis, talking positively of not having children and the freedom of spontaneity, yet they have to make plans for an impulsive trip to Paris.

Enter this new, young couple, Jamie and Darby (Adam Driver and Amanda Seyfried), who coincidentally shows up at Josh's lecture on the same night he's having dinner with Cornelia. The timing of the hip, cool married kids who quirkily use expletives as terms of endearment is not only a convenient plot device but later becomes an important detail in the third act. Driver's excellent performance and his suave schmoozing immediately creates suspicions, but like Josh and Cornelia, we soon put any doubts to rest because we're infatuated by their idiosyncratic relish for life. With whatever means available to them, they simply "do": he's an aspiring documentarian and she makes unique-tasting ice cream. Later on, of course, these small details become significant to a larger, overall theme that leaves a lasting impression. Through their encounters and conversations with the young couple — Josh updates his fashion while Cornelia prefers hip hop aerobics over Kindermusik classes — we slowly begin to realize the brilliance in Baumbach's plot. 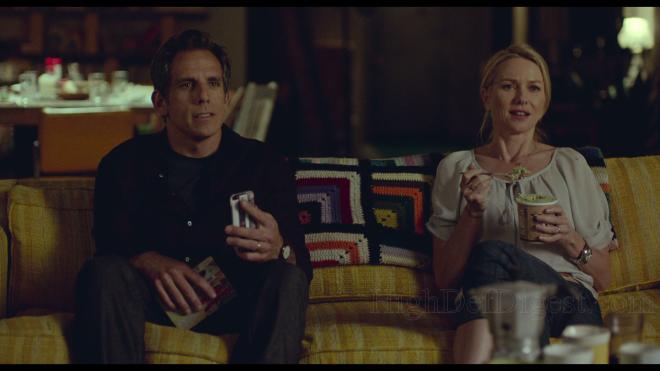 As the two couples grow closer and learn more about each other, the story evolves into an exploration of the generation gap, the differences between them as well as their similarities. Baumbach inserts acute observations about his characters that are as poignantly relatable as they are cynically damning. Grumble and complain as much as they do, Josh and Cornelia have adapted to the digital, interconnected age of mass communication, but Jamie and Darby have an affinity for the past, acquiring things with an idealized, romanticized point of view. There is something infectious and endearing about the way Jamie takes pleasure in material from the past, but after a while, that same attitude slowly turns to resentment and insulting. Or as Josh puts, it feels like stealing because they didn't personally experience those things. As the story progresses, the conversations and Josh's gradual frustration with what he first thought attractive start to take on a new meaning where value is lost and empty —  Lyotard's postmodern condition matured into a reality.

On the surface of it, 'While We're Young' is a simple and, on some levels, familiar story going exactly as one would expect. Coming from two different generations, the couples are fated to clash and repressed passions doomed to be exposed. However, Baumbach manages to surprise in the final quarter of the film by doing precisely what Josh had been struggling to do all along with his documentary — creating unexpected meaning through the mundanely expected. While Josh strains to find the dramatic, emotional core, the smug but talented Jamie manufactures a drama to make the real more interesting — a commentary on modernity and this very film itself, the irony of capturing truth through fiction. With cinematography by Sam Levy and editing by Jennifer Lame, Baumbach expresses these ideas with uncomplicated, accessible directing that still feels candid and genuine. The final image we're left with exhibits a complexity through simplicity in this delightfully witty dramedy.

Lionsgate Home Entertainment brings 'While We're Young' to Blu-ray on a Region A locked, BD25 disc housed inside a blue, eco-cutout case with a glossy slipcover and a code for an UltraViolet Digital Copy. At startup, the disc commences with a series of skippable trailers before switching to the standard menu screen with full-motion clips and music.

Shot digitally, the dramedy debuts on Blu-ray with a heavily stylized cinematography that's deliberately meant to look aged and somewhat unappealing, which in turn makes it oddly alluring and attractive.

The AVC-encoded transfer comes with contrast and brightness levels that intentional fall on the lower end of the grayscale, making the presentation seemed faded and almost washed-out. While whites are actually clean and crisp, blacks are noticeably murky and thick, ruining many of the finer details around clothing and during low-lit interiors because shadows tend to complete engulf background information. Bright, daylight exteriors fare much better, but brightness remains weak and unattractive. The video is still quite sharp with very well-defined lines of various objects and healthy facial complexions can be pretty revealing.

Presented in its original 1.85:1 aspect ratio, the image intentionally appears flat and drained, but the deep-focus photography manages to give a sense of space and distance. The palette also favors earth tones and yellow-amber tints, further giving the picture an antiquated appeal, but primaries remain accurate and bold beneath the creative choice.

Along the same lines as the video, the low-budget independent film arrives with a deliberate style that plays to the plot's themes and complements the visuals perfectly.

Being a character-driven story, the DTS-HD Master Audio soundtrack places all its attention on the vocals, which come in superbly. Dialogue and conversations are clean with excellent intonation and tone in each actor's voice. The design is an intentionally front-heavy presentation as though it was originally recorded in stereo. Thankfully, the lossless mix never feels limited or restrained, maintaining outstanding channel separation and balance between all three channels. Imaging feels broad and expansive with great presence and a dynamic, extensive mid-range that delivers clear, detailed highs.

The music and song selection is most impressive, filling the entire soundstage with energy and enthusiasm. Bass is responsive and accurate, providing appreciable depth to specific scenes. Although feeling more like a stereo track, the mix comes with plenty of background activity that's continuous and engaging, maintain a wide sense of space throughout.

Writer and director Noah Baumbach delivers another shrewdly perceptive comedy-drama in 'While We're Young.' With excellent performances from the entire cast, the film is an endearingly thoughtful but also honest tale on the road of a midlife crises towards self-discovery. The Blu-ray arrives with a stylized yet pleasing audio and video presentation. The supplements are a bit lacking, but the overall package makes for an excellent rental before deciding to purchase.

Sale Price 13.24
List Price 24.99
Buy Now
3rd Party 4
In Stock.
See what people are saying about this story or others
See Comments in Forum
Previous Next
Pre-Orders
Tomorrow's latest releases