An astounding array of talent came together for the big-screen adaptation of John Fowles’s novel 'The French Lieutenant’s Woman,' a postmodern masterpiece that had been considered unfilmable. With an ingenious script by the Nobel Prize–winning playwright Harold Pinter, British New Wave trailblazer Karel Reisz transforms Fowles’s tale of scandalous romance into an arresting, hugely entertaining movie about cinema. In Pinter’s reimagining, Jeremy Irons and Meryl Streep star in parallel narratives, as a Victorian-era gentleman and the social outcast he risks everything to love, and as the contemporary actors cast in those roles and immersed in their own forbidden affair. The French Lieutenant’s Woman, shot by the consummate cinematographer Freddie Francis and scored by the venerated composer and conductor Carl Davis, is a beguiling, intellectually nimble feat of filmmaking, starring a pair of legendary actors in early leading roles.

Plenty of brilliant novels have been deemed "unfilmable" by members of the literary cognoscenti, but such daunting critical pronouncements don't always prevent the movie industry from trying to capture their elusive essence on celluloid. Sometimes such efforts succeed, often they don't, but director Karel Reisz and screenwriter Harold Pinter hit the bullseye with their fascinating adaptation of John Fowles' very challenging 'The French Lieutenant's Woman,' a modern interpretation of the Victorian novel that features a running commentary by the author, who reflects on the characters, action, and social history of the period throughout the book. The unique presentation elevates the story of romantic obsession and a young woman's search for self to a higher, more intellectual plane, but at the same time makes it almost impossible to translate to the screen. In an inspired move, Reisz and Pinter dodge that awkward obstacle by replacing the narrator with a second, simultaneous love story focusing on a pair of adulterous actors appearing in a film adaptation of 'The French Lieutenant's Woman.' Their modern-day morals, attitudes, and choices both parallel and contrast with their fictional Victorian counterparts, and as the dual tales progress, they creep ever closer to a strange and exciting convergence.

Reisz expertly cuts between the two narratives, seamlessly weaving them together to create a cohesive whole that stimulates our minds and emotions. His lyrical style does justice to both stories, although the magnetic attraction between Sarah Woodruff (Meryl Streep) and Charles Smithson (Jeremy Irons) receives the bulk of attention and subtly influences the illicit relationship between Anna (also Streep), the actress who portrays Sarah, and Mike (also Irons), who begins to feel the same unquenchable desire for Anna that Charles feels for Sarah. Both couples face similar problems in different eras, and the social timbre of their respective times shapes the way their affairs progress and ultimately play out.

Or does it? Sarah is a modern woman trapped in a period setting who longs to break free from the societal and class constraints that stymie her spirit and limit her experience. An English domestic who's cast adrift when her mistress dies, the morose, brooding Sarah takes a position with an austere widow simply because her house overlooks the sea, which strangely mesmerizes her. Soon, we learn the woman the gossipy townspeople dub "Poor Tragedy" and "The Scarlet Woman of Lyme" engaged in a brief, torrid affair with a wounded French seaman who later abandoned her, breaking her heart and provoking a kind of neurotic catatonia.

Despair consumes Sarah and salvation eludes her until she encounters Charles, a "disciple of Darwin," who comes to Lyme to excavate fossils from the flint beds near the town. Recently engaged to Ernestina (Lynsey Baxter), an upstanding lady with a sizable dowry, Charles has made an advantageous match, but he's unprepared for the passion he feels for Sarah, who instantly bewitches him. Her air of mystery and vulnerability stoke his senses and he hopes to somehow save her from almost certain self-destruction, but the self-professed "French lieutenant's whore," whose education and ideals far exceed her social station, seems to revel in her misery. "I knew it was ordained that I should never marry an equal," she says, "so I married shame." Charles still tries to free Sarah from her personal hell, and in the process becomes ever more attached to her, all at the risk of alienating his fiancée and losing his honorable reputation.

Shame and reputation, however, don't concern Anna and Mike, both of whom willingly enter into their affair without much thought about its consequences. While on location, the two rehearse, research their parts, and make love, releasing the passion that's so torturously pent up in the characters they portray. Though strict societal and moral rules govern Sarah and Charles, who long for the freedom to act on their impulses, no rules hinder Anna and Mike, yet their limitless freedom ironically taints what begins as a no-strings sexual fling, adding the same tension and uncertainty their uptight Victorian counterparts feel. And as shooting on the film-within-the-film progresses, the lines begins to blur between the actors and their emotionally charged roles, as Anna and especially Mike begin to adopt the qualities of Sarah and Charles. While Sarah must strategize to break free of the social chains that bind her and become something that didn't yet exist in that day and age - an independent woman - Anna takes her emancipation for granted and misuses it.

Fowles denied 'The French Lieutenant's Woman' was a feminist book, but feminism certainly pulses through the film's veins, as Sarah tries to wade through uncharted waters in her dogged pursuit of a more fulfilling life and Anna holds the reins and directs the course of her relationship with Mike. The movie also paints a damning portrait of Victorian society, yet shows the choices we enjoy in contemporary times can make our lives equally messy and inspire just as much longing and regret. Though the storylines of 'The French Lieutenant's Woman' may not be particularly satisfying, its structure, characters, and themes energize the picture and add just enough complexity to keep it swirling about our brains long after the closing credits roll.

Streep earned her first Best Actress Oscar nomination for her dual portrayal, creating two very different women and honoring each to the fullest. Today, her curly mane of flaming red hair at times recalls the animated Princess Merida in Pixar's 'Brave,' as does her resolute attitude and heightened sense of self, but the similarities end there. Streep (who's beautifully photographed by the great Freddie Francis) shades her riveting work with marvelous nuances, rarely striking a false note as she crafts a multifaceted performance that alternately intrigues, thrills, and haunts us. Irons, in only his second feature film, is equally good. Watching him fall under the spell of two mesmerizing women and react to them with the same sense of desire, need, and desperation in two different time periods until he can barely distinguish between them is quite fascinating. He and Streep also share a potent chemistry that makes both of their relationships crackle with tension.

Those expecting a standard period romance will be severely disappointed with 'The French Lieutenant's Woman,' but savvy filmgoers will be dazzled by its unorthodox structure, provocative themes, and elegant presentation. Pinter's Oscar-nominated screenplay captures the flavor of Fowles' novel while broadening its scope and emotional impact, and Reisz exquisitely realizes his vision, merging two passionate love stories with a thoughtful social commentary that shows how far we've come and how little we've changed over the past century. 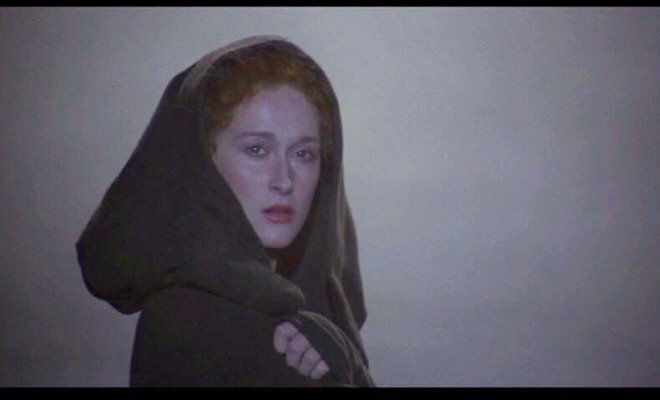 'The French Lieutenant's Woman' arrives on Blu-ray packaged in a standard Criterion case. An eight-page, fold-out booklet that features an essay by film scholar Lucy Bolton, cast and credit listings, and transfer notes (but, sadly, no photos from the film) is tucked inside the front cover. Video codec is 1080p/AVC MPEG-4 and audio is LPCM mono. Once the disc is inserted into the player, the static menu with music immediately pops up; no previews or promos precede it.

With its dual storylines transpiring a century apart, the look of 'The French Lieutenant's Woman' fluctuates between the warm, glowing tones of Victorian England and a bright, crisp, modern-day appearance, and Criterion's exceptional 1080p/AVC MPEG-4 transfer - created in 2K resolution from the original camera negative - handles all the shifts in tone and temperature with aplomb. A lovely, understated grain structure maintains the feel of film, and though some scenes sport more texture than others (usually due to low lighting), the discrepancies are few in number and brief in duration. Excellent clarity and contrast allow the lush exteriors of coastal Britain to pop; individual leaves on ivy-covered walls are well defined, as are complex costume and wallpaper patterns and all the myriad knickknacks that litter the cluttered Victorian interiors. Director Karel Reisz employs a number of reflections throughout the movie to call attention to the characters' multiple facets and conflicted viewpoints, and all flaunt a vivid sharpness that's often quite striking.

Colors are vibrant and lush, especially the verdant greens of the bucolic English countryside, and flesh tones remain stable and true throughout. Rich blacks add marvelous weight to the frame, while stellar shadow delineation heighten the impact of nocturnal scenes. Close-ups showcase Streep's creamy complexion and the facial hair of Victorian gentlemen well, and only a few errant specks dot the pristine source material. A few instances of motion blur are a bit jarring, but no other digital anomalies afflict this eye-filling presentation that revitalizes this beautiful, long-neglected film.

According to the liner notes, the LPCM mono track was "remastered at 24-bit from the 35 mm magnetic tracks." The sound, much like the image, is lush and highly detailed, with a wonderful degree of fidelity and tonal depth. Atmospherics, such as chirping birds, subtly enhance quiet scenes, while more bombastic elements, like the waves crashing against the promontory, heighten excitement and intensity. Delicate accents, such as footsteps crunching against the underbrush, are well defined, and all the music elements, from Carl Davis' brooding romantic score to an ethereal Mozart piano sonata, sound rich and elegant. Except for the scene on the cobb when Charles first sees Sarah, all the dialogue is clear and easy to comprehend, and though a few instances of mild distortion fleetingly intrude, the track remains as pure as most of the Victorian characters.

As usual, Criterion enhances the disc with several thoughtful and absorbing supplements. Although an audio commentary would have been fascinating, one is not included here.

Intelligent, provocative, beautifully filmed, and wonderfully acted, 'The French Lieutenant's Woman' showcases the talents of director Karel Reisz, screenwriter Harold Pinter, and actors Meryl Streep and Jeremy Irons in a dual tale of Victorian repression, dark obsession, and modern love. The inventive storytelling and poetic presentation raise the film to a higher plane and enhance its emotional power, while Criterion's Blu-ray restores the movie to its original splendor, thanks to a lush, vivid video transfer and excellent audio. Several absorbing supplements add vital context and perspective to this multi-faceted, often fascinating motion picture that deserves to be rediscovered. Highly recommended.

Sale Price 21.59
List Price 39.95
Buy Now
3rd Party 16.79
In Stock.
See what people are saying about this story or others
See Comments in Forum
Previous Next
Pre-Orders
Tomorrow's latest releases