'Metamorphosis' - An anti-aging serum is being developed by a scientist. When he loses his funding he uses it on himself with dire results.

'Beyond Darkness' - A minister and his wife move into a haunted house.

Sometimes a movie just needs to be gory and full of gooey blood and guts effects to be fun. Forget clean story structure or sensible character development - let alone the fact that the movie could be a ripoff of another film - just being a movie that provides ample setup for some gooey monster action is good enough to be fun. With Scream Factory's latest Double Feature, we get two Gene Lebrock starring flicks 'Metamorphosis' and 'Beyond Darkness' that end up ripping off 'The Fly' and 'The Exorcist' respectively while providing a lot of fake blood-covered fun. You can't take these movies seriously so it's best to not even try.

Dr. Peter Houseman (Gene Lebrock) is an egotistical college professor who is on the verge of making a big breakthrough in the area of genetics. He is on the cusp of unlocking the secrets buried within our genetic code that would effectively reverse the aging process and ensure that we live forever. The only problem is he's now being forced into publishing his findings before he has any confirmed conclusions. With a financial overseer named Sally Donnelly (Catherine Baranov) breathing down his neck, Peter also has the spiteful tenured professor Dr. Lloyd (Stephen Brown) looking to rip off his research.

While Peter may be able to woo Sally Donnelly, he can't protect his research from Dr. Lloyd - that is unless he takes his serum himself. In a bit of a drunken stupor, Peter decides to inject himself with the serum - through his eye no less - and the results are a bit less than exciting. At first. While Peter thinks the serum is a success and has had no ill effect on him, other people around him are starting to notice odd behaviors. Peter has moments where he can't remember doing things like visiting his lab late at night or nearly beating a woman to death. As his genetic structure dissolves to a primordial state, Peter becomes a living breathing nightmare.

Directed by the great George Eastman, 'Metamorphosis' is generally a pretty bad movie. The plot is about as thin as a piece of paper and the characters are more like caricatures, but that doesn't keep the movie from being a ton of fun! There is plenty of Karo syrup blood to go around as Peter tears people apart and then ultimately transforms into his primordial monster state.

Performances are a bit all over the map. Character interactions and motivations feel clueless. When Peter randomly shows up at Sally's home to discuss his project, she decides there's no time like the present to go to bed with him. No setup, no mention of mutual attraction, just bed. Then you have the goofy but fun interactions between Peter and Dr. Lloyd. There's something funny about a thirty-something-year-old man being intimidated by a guy who is literally on his last legs - as this movie keeps reminding people the good doctor has to use crutches. If you think about 'Metamorphosis' too much you'll just hurt yourself. It's best to go with the flow and let the fun happen. 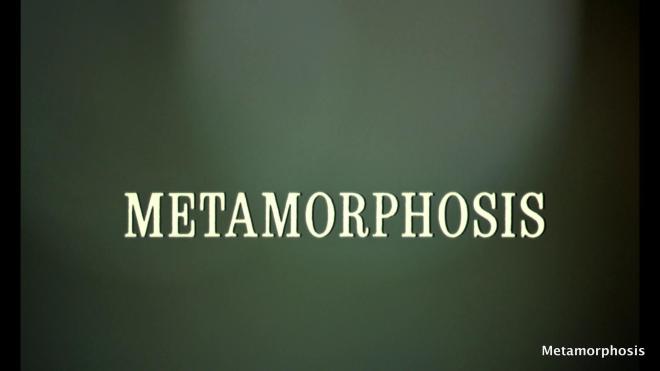 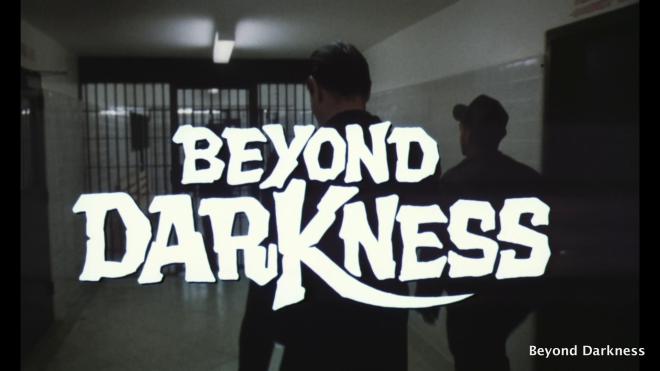 Reverend Peter (Gene Lebrock) and his wife Annie (Barbara Bingham) and their young son Martin (Michael Stephenson) and their daughter Carol (Theresa Walker) - not Carol Anne - have just moved into a beautiful old house. Everything seems like it should be going great, but that beautiful new home has a few problems. Thankfully the roof doesn't leak and there doesn't appear to be any kind of foundation issues or asbestos on the pipes that need to be removed, but it's those pesky ghosts that keep haunting them by turning on the radio really loudly and chasing them around with knives!

Little did the good Reverend know that the home was the site of any number of satanic rituals and evil doings including where a coven of witches may have killed a bunch of children and were burned at the stake! It's funny how something like that didn't make the disclosure listing, but never the less Peter and his family are terrified and the only man with the answers is the deranged Father George (David Brandon) who witnessed the execution of one of this murderous witches. When Martin becomes possessed by the evil spirits, Peter and George must put their faith and their souls on the line to rescue the child.

I love that Scream Factory makes note in the artwork description that 'Beyond Darkness' was directed by Claudio Fragasso - the brilliant mind behind 'Troll 2.' Really that's about all you need to know about this movie because from the mention of that man's name you should be able to draw your own conclusions about the quality (or lack of) of this film. Like 'Troll 2' this movie was originally titled 'House 5' as an unrelated sequel to a different franchise. 'Beyond Darkness' is a movie that basically is a cheap ripoff of the 'House' films while also knocking off 'The Exorcist' and 'Poltergeist' - only whatever made those movies scary and fun didn't transfer over to this movie in any meaningful way. So amazingly devoid of scares, it's a long way into the movie before you realize you're supposed to be scared from what's happening on screen - but by that time you're more worried about poor Michael Stephenson who had to later star in 'Troll 2.' That poor kid's acting career was dead before it even had a chance to breathe. On top of that you have yet another appearance from Gene Lebrock as a guy named "Peter" which strikes me as being really funny for no apparent reason.

There just isn't much to be said about 'Beyond Darkness' that probably hasn't already been said about 'Troll 2' - it's just a really bad boring movie filled with goofy over the top performances. While not quite as insane as 'Troll 2,' Claudio Fragasso gets to prove yet again why he's the best at what he does for his particular brand of "so bad it's incredible" filmmaking. For a movie with a 93-minute runtime, it's incredibly bland and uninteresting - in all of the best ways. If you love bad cinema, you should be amply entertained with this one.

Taken together, 'Metamorphosis' and 'Beyond Darkness' may not make the greatest of Double Features. They're certainly two terrible movies that are fun to watch - but at the same time it's a bit of a test to view these things back-to-back. If you're going to fire up 'Metamorphosis' you may as well toss on an extra helping of 'The Fly' or 'Re-Animator' while if you're going to take on 'Beyond Darkness' you're best suited to segue right into 'Troll 2' because that kind of pain needs a friend!

'Metamorphosis' and 'Beyond Darkness' arrive on Blu-ray as part of a Double Feature package from Scream Factory. Pressed on a Region A locked BD50 disc and housed in a standard case, the disc opens to a static main menu offering simple navigation options to each film and their respective trailers.

Making its Blu-ray debut, the transfer for this one leaves quite a bit to be desired. Given the olive drab color scheme and the dimly lit locations - there just isn't a lot to see or love about this image. Aside from slight detail improvements, I'd wager one would have a hard time noticing any practical improvements between an upscaled DVD and this image. Close up shots and any scene that was photographed in daylight look the best but the rest of the image is a bit of a washout. While grain has been retained, the film as a whole looks very soft and smeary. Black levels are decent, but there is quite a bit of crush during the darker scenes that coupled with the softness of the film can look like someone with greasy fingers ran their hands over the print. Thankfully the gore effects come through just fine but don't expect to have your hair blown back by this one. 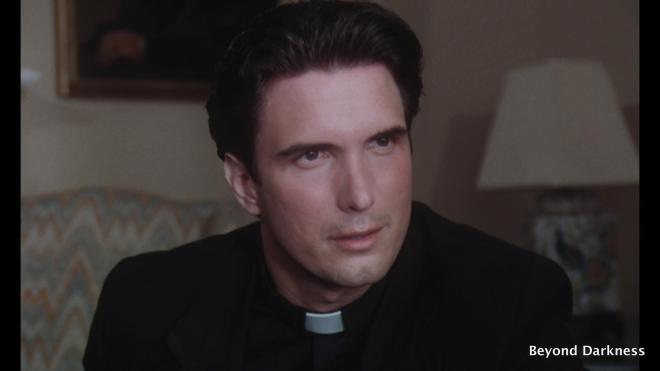 Faring a bit better than 'Metamorphosis,' this transfer for 'Beyond Darkness' offers a nice uptick in quality on Blu-ray. Film grain has been retained so when properly lit there is a nice amount of fine detail to enjoy - but lighting is a bit of a problem. Some scenes - seemingly shot to shot - can appear overly dark and at the same time maintain the look of a film with boosted contrast levels. Colors are hurt the most here as most of the film has a drab look to things, so much so that it feels like colors were intentionally shot this way but then accompanying shots can look clean and beautiful so it becomes difficult to ascertain if this is an effect of the transfer or more likely, Claudio Fregasso's ability as a director to ensure that his shots match and preserve continuity. All around this isn't a terrible transfer, but this was never a movie that was destined to look great in high definition.

Sporting a decent DTS-HD MA 1.0 track, 'Metamorphosis' gets some high marks for sound fidelity. Considering the low budget nature of this movie, this audio track is actually pretty impressive. The dialogue comes through crisp and clear without any kind of distortion or any age-related artifacts. Sound effects and the film's minimalist score occupy their own space with plenty of separation. Levels are nicely kept in the mid ranges with a nice low ominous tones that keep the track lively and present. All around this is a nice track that does a solid job of maintaining the auditory squishiness of the main movie. 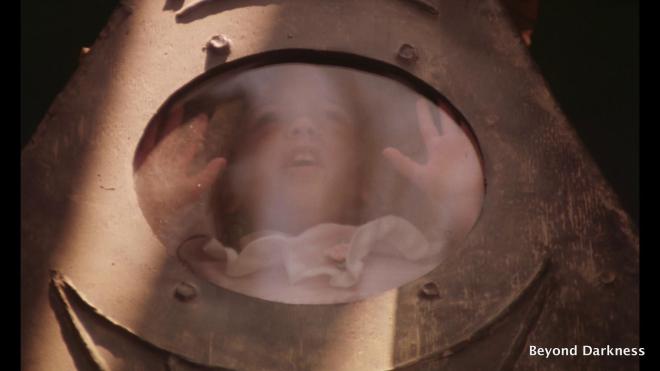 'Beyond Darkness' gets some solid marks out of its DTS-HD MA 2.0 track. Imaging is probably the best aspect of this track - possibly even the movie - as there are plenty of sound effects that move about the channels in the typical "haunted house" fashions. Dialogue is clean for the most part, perhaps a bit too quiet during the more conversational moments - but when the action picks up and this movie goes "full Exorcist," the track becomes a mass of audio featuring plenty of shouting, ghostly effects, and thundering music. Thankfully none of these elements interfere with each other ensuring that the track is clean and lively.

Metamorphosis Trailer: (HD 3:43) At this length, the trailer gives away pretty much 99% of the movie without giving a sense of the story. The only thing it holds back is on the gore effects. 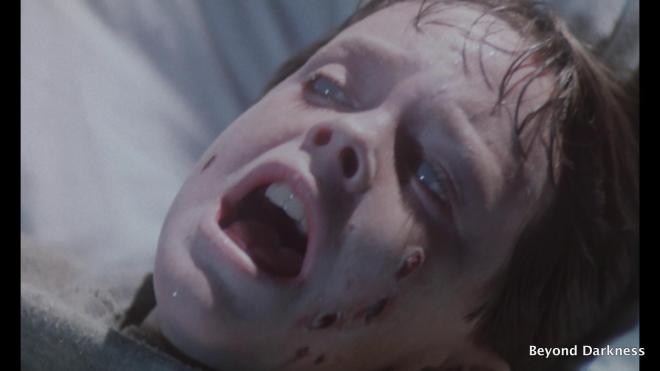 Beyond Darkness Trailer: (HD 1:29) A simple enough trailer that teases the plot but fails to do anything more than promote the movie as a cheap 'Poltergeist' and 'Exorcist' knock off. 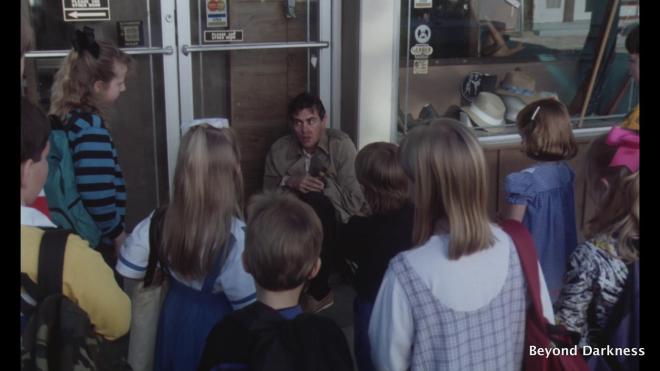 Some movies just aren't diamonds in the rough, so to speak. While bad, they can still be very entertaining. The Double Feature from Scream Factory for 'Metamorphosis' and 'Beyond Darkness' is just that kind of filmmaking. These movies are without a doubt bad, however, because of their genuine lack of cinematic quality - they prove to be a fun time. The A/V presentations for both movies is serviceable, not the best presentations for a pair of catalogue releases, but they're not the worst out there either. With only trailers for extra features, it's hard for me to call this one as anything better than being for the fans.

Sale Price 36
Buy Now
3rd Party 36
In stock. Usually ships within 4 to 5 days.
See what people are saying about this story or others
See Comments in Forum
Previous Next
Pre-Orders
Tomorrow's latest releases