They're back...again! And they're still looking for Carol Anne in this riveting and climactic finale to the Poltergeist trilogy. Sent by her parents to live in a Chicago high rise with her aunt, uncle and cousin, Carol Anne must face demons more frightening as ever before, as they move from invading homes to taking over an entire skyscraper!

Sometimes it takes a couple sequels before a studio finally realizes a franchise is dead. It took 'Jaws' three sequels. 'Batman' needed three before it got rebooted. 'The Terminator' is onto its fourth and potentially final outing if the overseas box office dollars fail to rack up. But then you have horror franchises that seem to go on forever like 'Friday The 13th' or 'Halloween' before they're remade and get a dozen more sequels. In the case of 'Poltergeist,' a mystifying trip to 'The Other Side' should have been the end, but apparently the ghouls haunting poor Carol Anne needed to pop by Chicago to take in a Cubs game, a quick private tour of the Field Museum, and possibly do a little shopping at Water Tower Place before deciding enough was enough.

Sweet little Carol Anne Freeling (Heather O'Rourke) has seemingly moved on from being terrorized by spirits who want to sap her life essence, but at the same time her experiences have left her a bit scarred. Her dreams take her back to dark places so she's been sent to Chicago to live with her Aunt Patricia (Nancy Allen), Patrica's new husband Bruce (Tom Skerritt) and his teenage daughter Donna (Lara Flyn Boyle) while Carol Anne attends a school for gifted kids. School life is a bit of a drag and totally lame (I'm trying to reconnect with my forgotten 80s lingo) for Carol Anne. The kids somehow know about her haunted encounters and tease her endlessly making them total dweebs, and the head schoolmaster Dr. Seaton (Richard Fire) treats her like a sideshow freak to show off to his colleagues.

Unfortunately Carol Anne and her family's experiences on "The Other Side" didn't stop the evil Reverend Kane (this time played by Nathan Davis) from finding her. Slowly he gains his power back in order to capture Carol Anne inside the "mirror realm" once and for all. Thankfully stalwart psychic warrior Tangina (Zelda Rubinstein) picked up on some bad vibes and has rushed off to Chicago to help Carol Anne put an end to Kane and his evil once and for all. As Kane captures Carol Anne's family one member at a time, Zelda may be too late.

'Poltergeist III' is just one of those legendary movies from the horror franchise-addicted 80s that just should never have been made. By the end of 'Poltergeist II' the story had been wrapped up pretty sufficiently. "Vomit Monster Kane" had basically been destroyed and the Freeling family was happy and healthy. As the second film was already stretching things to justify its existence, this third entry doesn't even bother to try. How does Kane return after seemingly being destroyed? All we're given from Zelda Rubinstein's Tangina is that "He's found her again!" before the woman scampers away from afternoon tea to save the day. Added to its obvious cash grab woes is the fact that only two actors, Zelda and Heather O'Rourke even bothered to return. When Craig T. Nelson says he's had enough, that should have been taken as a sign at the studio level not to continue. Heck, even Jerry Goldsmith refused to come back to do the score! Then you have the recasting of Kane after the untimely death of Julian Beck. Beck was the sole reason 'Poltergeist II' was even remotely creepy. His being replaced by a look-alike with pancake makeup and then having that actor be dubbed by a sound-alike feels fake and just a bit disrespectful to the man's memory. 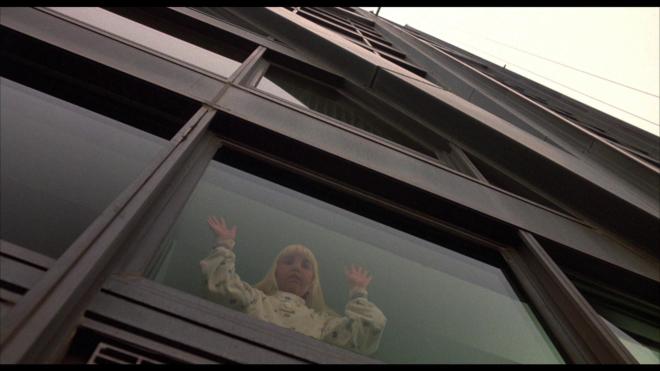 The biggest problem with this entry is that it simply shouldn't have been a 'Poltergeist' flick. Had it just been a creepy haunted house movie that takes place in Chicago's Hancock Tower, that might have been something. It's a creepy obelisk-looking building that stands apart from any other high-rise in the city and is the perfect location for a haunted house movie - much like how Cabrini Green was used for 'Candyman.' But sadly so much of this film takes place in a parking garage it never really feels like the building is much of a character the way the Freeling house was in the original. Additionally with the slashed budget, this movie doesn't look or feel like a 'Poltergeist' film. The previous entries had large effects budgets that included practical makeup and optical effects. This one is all lights, smoke, and mirrors - which is cool and spooky at times, but when that's the only trick in the bag, it gets a little old after awhile. The best moment of the movie is when Donna climbs out of Tangina's corpse. Also a bit sad is the fact that this movie didn't even bother to invent a signature catch phrase like "They're here!" or "They're back!" Even with all of these issues, I have to admit to loving this movie, warts and all.

Don't get me wrong, 'Poltergeist III' is a bad movie, but it holds the place in my cinematic upbringing as the first 'Poltergeist' film I saw on VHS without having been edited for TV. So when I was about six or seven years old and I got to rent it, it was genuinely pretty spooky, but it really doesn't hold up well after all these years. On top of the film aging poorly, you have the added drama surrounding the continuing "Poltergeist Curse" with the unfortunate sudden death of star Heather O'Rourke. She was a young talent and a rising star who sadly never got to offer the world anything more than these three films and several television appearances. After 27 years and a few aborted attempts, 'Poltergeist' has invaded theaters once again with a new reboot starring Sam Rockwell (he's the dad, not the little girl). As that film failed to truly ignite the box office, maybe this franchise can enjoy eternity in peace. Not likely, but we'll see what happens in the years to come.

'Poltergeist III' arrives on Blu-ray from 20th Century Fox and MGM pressed on a Region A locked BD50 disc. The disc comes housed in a standard eco-friendly case and loads directly to the main menu. Note: 'Poltergeist III' also can come packaged with 'Poltergeist II' in double disc packaging. That disc is identical to the previous release from 2011.

Considering the age and its standing in the franchise, I wasn't expecting much from 'Poltergeist III' on Blu-ray, but this image transfer is actually very strong. With film grain retained, detail levels are very strong and highlight the film's look and feel well enough - even though it makes the pancake makeup stand out quite a bit. Colors appear vibrant and natural, even if the film takes on a bluish tint, this transfer doesn't look like it was pushed into the dreaded "Teal/Orange" territory as flesh tones are appropriately pale given the wintery Chicago setting. Black levels and depth are very impressive since this movie relies on mirror tricks for a number of scares, the image feels like it can go off into the distance forever. Overall the print used is in fine shape, there are a couple small scratches and a little speckling around the opening titles and credits, but those disappear quickly leaving the rest of the film looking pristine.

Rolling a DTS-HD MA 5.1 track, 'Poltergeist III' sounds better than ever, and yet at the same time underwhelms with this audio track. On the plus side dialogue is crisp and clean offering plenty of separation from the various sound effects and composer Joe Renzetti's score to live. On that note, there just isn't much reason for this film to be a surround track. I'd wager 90 percent of the sound is stereo/center loaded. The surrounds are rarely (if ever) engaged. While the lossless nature offers some extra oomph around the scarier story beats, the track itself just doesn't impress me all that much.

Trailer: (HD 1:05) This trailer is more like a teaser as we watch an unseen force swoop around the city of Chicago like it escaped from 'The Evil Dead.' It's still effective and sets up the movie well enough.

I may not love 'Poltergeist III' but I still get a kick out of it all these years later. It's unintentionally hilarious and it still holds a place in my childhood heart. Looking at it again, it's very clear to see how and why there weren't any additional entries to this series - in spite of numerous cast departures. Even in its badness, it's still a good bit of fun. Fans should be happy with the solid picture quality and the decent audio presentation. The extras leave a lot to be desired, but since this movie can easily be found at a bargain basement price point, I'm not one to complain much. This one is most certainly for the fans. If you've never seen 'Poltergeist III' then I'd suggest a rental.

Sale Price 12.95
List Price 14.99
Buy Now
3rd Party 8.05
In Stock.
See what people are saying about this story or others
See Comments in Forum
Previous Next
Pre-Orders
Tomorrow's latest releases