Newly arrived to a remote desert town, Catherine (Nicole Kidman) and Matthew (Joseph Fiennes) are tormented by suspicion when their two teenage children mysteriously vanish into a dust storm.

Every now and then, a filmmaker seems to feel the need to prove themselves by producing a film that is slim on story and character development but exudes sadness and wallows in depression. Films like 'Babel' immediately spring to mind. These are films made by top-tier talent with an impressive cast that seem to have no other purpose other than to make an audience depressed and hate life. 'Strangerland' is just that sort of drama thriller with an impressive cast that is acting their hearts out but with the thin material the film becomes a rudderless ship sailing some very sad waters.

Catherine Parker (Nicole Kidman) and her pharmacist husband Matthew (Joseph Fiennes) have moved to the rural Australian town Nathgari. Coming along are the Parker's two children, their young son Tommy (Nicholas Hamilton) as well as their sexually rebellious 15-year-old daughter Lily (Maddison Brown). The Parker family isn't in this dust-covered area of Australia by choice. After Lily was involved in an illicit affair with one of her teachers, Matthew felt it necessary to move his family as far away from the scandal as he possibly could - no matter what it did to the family. As much as they try, Catherine and Matthew can't seem to tame Lily's wild behavior and it's starting to strain the last threads holding their marriage together.

Believing that restraining Lily's movements and activities is the best course of action, Catherine and Matthew only succeed at pushing her further and further away. At a time when she needs a friend to talk to, all she's getting are two domineering parents who make futile attempts at understanding the root of their daughter's behavior. On the day a gigantic dust storm is due to hit, Lily and Tommy are nowhere to be found. Catherine calls the school only to learn that the children have had sporadic attendance at school. Knowing Lily's past behavior, Matthew is angered but unconcerned about his children's disappearance. As the storm abates and the hours tick by, it becomes abundantly clear that something has happened to Tommy and Lily.

Enlisting the help of local police officer Detective David Rae (Hugo Weaving), the search for the missing children begins. As volunteers and police officers attempt to find the children, more details of the disgruntled family come to light. Lily apparently had several male companions of varying ages she was intimate with, so if it was an abduction, there are several suspects on Rae's list to interview. As Rae clears these men from any wrong doing he becomes increasingly convinced that there may possibly be a reason a bit closer to home for Lily's erratic and self-destructive behaviors. As the days pass and Australia's unrelenting heat scorches the open landscape, Catherine and Matthew will have to confront their own personal demons if they ever hope to know what happened to their children. 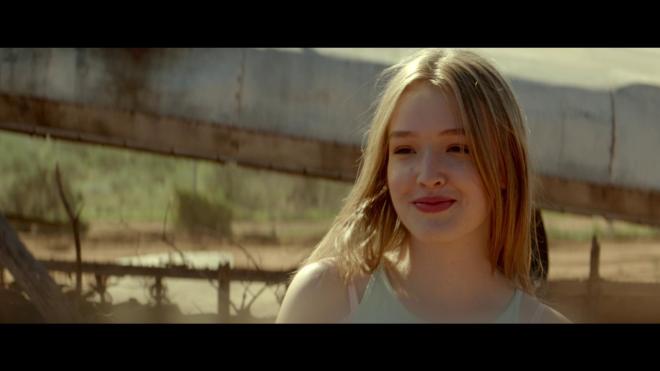 At nearly two hours, 'Strangerland' is an incredibly difficult film to get all the way through. This is a movie that seems intent on just making the audience believe that life is terrible and can't possibly get any better. There is a constant pessimism to the film that I just could not subscribe to. This isn't a film about the testament of the human spirit to persevere during a time of darkness, this is a movie that wants to show the world how terrible humanity can be when they're at their worst. I'm not one that believes that every movie needs to be wrapped up with a little bow and ribbon and return to "Happy Land," but if a film is going to strain my emotions there needs to be a point to the endeavor. Unfortunately, there is no other point to 'Strangerland' than to be as depressing as possible and revel in that state of debilitating sadness.

I'll give kudos to the cast for giving it their all. Nicole Kidman gives what could perhaps be called one of her best performances in years. Same for Joseph Fiennes who plays the father with a strained will - a man at the end of his rope with few options open to him in order to help his family. I'll also give a shout out to Hugo Weaving who brings a steadfast earnestness to his role as Detective Rae. He's a man with his own history that he'd rather not see repeated for a different family. With these incredible performances at play, you'd think that there would be something worthwhile to 'Strangerland,' but beyond watching people act out a "worst nightmare for a parent" scenario, there just isn't anything to this film. While we watch absolute raw emotion rip across the screen, we're given little to no worthwhile insight into the human condition.

Leading into Sundance, I had heard a lot about this raw and visceral movie starring Nicole Kidman. After those brief notices, I never heard a thing about the film and then all of a sudden it was coming out on Blu-ray. That didn't really surprise me since good movies get dropped to home video without proper theatrical runs all the time, but 'Strangerland' wasn't one of those overlooked gems. It's a sad and depressing movie that I can't think of a single person I would recommend it to.

'Strangerland' arrives on Blu-ray from Alchemy releasing and is pressed on a BD50 disc. Housed in a standard case with identical slip cover, the disc opens to trailers for other Alchemy Blu-ray releases before arriving at the main menu.

With an impressive 1080p 2.40:1 transfer, 'Strangerland' makes great use of the rough Australian landscape. There is a persistent dream-like haziness to the film, but it never interferes with color timing or the impactful detail levels. Black levels are wonderfully inky providing strong shadow separation so the film has an incredible sense of three-dimensional depth - especially during the sequences where rescue workers are out searching for the missing children. As I mentioned before, detail levels are often striking in this transfer - even through the intended haziness. The cracked asphalt on the desolate highways, the scraggly plant life, and facial features come through with outstanding clarity. Flesh tones appear appropriately pinkish as if the people in the film got a bit too much sun given their location. All around this was a very pleasing image.

Sporting a Dolby True HD 5.1 track, there is an impressive auditory life to 'Strangerland.' The film's sound design is very subtle, but if you listen there is a nicely immersive quality to the elements. The dialogue comes through front and center with great clarity, while the minimalist score from Keefus Ciancia and the sound effect elements round out the surround channels. The best moments of this audio track are during the dust storm as bits of dust and grit are kicked up into the air and flow through all of the channels. Levels are nicely balanced and you don't have to worry about riding the volume during the film's many quieter moments. All around this is a pretty great audio track to appreciate.

Strangerland The Cast: (HD 8:23) Joseph Fiennes, Hugo Weaving, Nicole Kidman as well as various members of the crew and production team talk about what drew them to the material and what it was like working with each other. There really isn't much here as any interview segment is buttressed with a scene from the movie making it a very run of the mill EPK style feature.

Strangerland The Story: (HD 5:36) The cast and crew briefly talk about the story and how it came about and how the emotional material propelled them to being a part of the production.

'Strangerland' was one of those movies that I had heard about, got excited for when I saw the cast listing, but was ultimately disappointed with in the end. The cast is doing some of their best work in years, but the movie doesn't really say much or do anything meaningful. The A/V presentation, however, is solid as a rock. Sadly there are only a couple skimpy extra features rounding out this disc. As much as I didn't like the movie itself, this Blu-ray is at the very least worth a rent as I will say that the movie probably just wasn't my brand and if you're at all curious you should see it for yourself.

Sale Price 7.61
List Price 8.87
Buy Now
3rd Party 2
In Stock.
See what people are saying about this story or others
See Comments in Forum
Previous Next
Pre-Orders
Tomorrow's latest releases