A scandal that shocked a nation: the biggest financial scam in Hong Kong's history, with all seven million citizens its unknowing victims. Chief Officer Luk (Louis Koo) of anti-corruption force ICAC has set a trap, but the web of greed, power, sex, and deception he uncovers reaches the highest levels of power in his own government- and beyond. Also starring Michael Wong, Gordon Lam and Dada Chen, the firestorm ignited by Operation Z Storm exposes a network of shadow agencies and puppet masters of power, connected through a global underworld.

There are just some movies that on the surface are difficult stories to make visually interesting without resorting to taking some dramatic licenses. Hacker films in reality would be just a couple of guys at computer keyboards, but in order to be visually interesting there needs to be some super cool looking impractical graphic interface followed up with some nonspecific technobabble, and if that fails you give Thor a gun and call him the best hacker in the world. Financial thrillers and legal thrillers work the same way. Looking through law books or a computer printout of wire transfers is only really interesting when you're trying to make a heartfelt drama about the people that are being hurt by fraud. It's really hard to make them an action movie without Tom Cruise or James Bond running around. Unfortunately 'Z Storm' attempted to be an earnest financial drama, but when that wasn't enough, it resorts to cliched action beats to keep the audience's interests alive.

Officers at the Independent Commission Against Corruption (ICAC) are keeping busy rooting out financial corruption. For the last forty years, the ICAC has been holding the Chinese financial markets in check with great success. However, even the most dedicated of government agencies the ICAC isn't without its own forms of corruption. Wong Man Bin, (Gordon Lam) is an investigator whose star is on the rise at the ICAC. He's fearless in his work and doesn't blink when it comes to taking on the big bosses of some of the major financial institutions. During one such raid, Wong confronts Mr. Law (Lo Hoi-pang) -yes that's the character's name - and Wong's fellow agents begin to see the cracks in the man's veneer.

Wong has apparently been playing both sides of the game. While busting corruption, he's also an active participant. Agent William Luk (Louis Koo) has had his suspicions about Wong for quite awhile. Without any hard evidence all he's been able to do is keep a close eye on Wong's activities. However, when Wong's beaten and battered wife shows up with damning evidence about her husband and his true nature, Luk is ready to take Wong down and ensure that his fellow agent sees the light of justice.

What should have been a pretty straight forward cat and mouse, battle of the wits and wills movie set in a real world scenario about an honest cop/agent going after corruption within the system quickly turns into a bit of a mess. First off it tries to be a financial thriller and when that doesn't quite work out, it attempts to become a high-stakes legal thriller with the very random introduction of a attorney called Wu (Michael Wong) and his call girl assistant Dadda Chan (Angel Leung) and their wheeling and dealings within the Chinese Marketplace. Had 'Z Storm' stopped there it could have become something of a 'Michael Clayton' style thriller, but then it randomly feels the need to up the ante and become a full-out action film complete with car chases and shootouts. 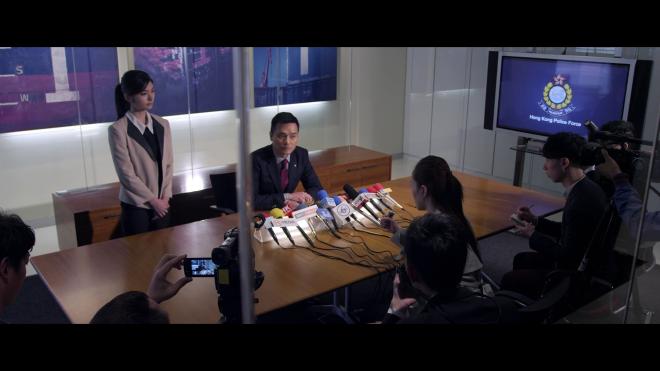 'Z Storm' is a strange release to be sure. Part of the problem comes from what I mentioned earlier that the true to life, gritty side of financial intrigue just really isn't all that dramatically interesting. The film attempts at letting the audience know the stakes by implying that the lives of over 7 million people could be affected by the actions of a corrupt charity, but at the same time since we're not given access to any of those people affected - it becomes increasingly harder to care. So I guess it's only natural to burn about ten minutes of your movie on a needless, nauseatingly-shot car chase sequence when you've got nothing left to fall back on. So much of the movie feels like it was tacked on as an afterthought you can practically see the invisible tape holding the pieces of the movie together.

I can't help but feel like had 'Z Storm' taken a page from 'The Insider' things could have been different. At the heart of it, the two movies are very similar as they're both about men who are willing to go to great lengths to expose a lie - only we don't really care about any of the characters in 'Z Storm.' We start the movie following Wong who turns out to be a bad guy so we're stuck with Luk who in turn ends up being a sort of wet blanket exposition dump of a character. Not helping things is the fact that it's title makes it sound like a Zombie movie. Now a financial thriller with zombies could have been something worth seeing. 'Z Storm' is one of those messes that shows that it didn't really know what it was going to be until it was too late to bring the pieces together in a meaningful way. Apparently a sequel is set to be released in China sometime this year so who knows, maybe a second crack at the story could find the competent thriller this film tried to be?

'Z Storm' Arrives on Blu-ray thanks to Well Go USA releasing and is pressed onto a Region A BD25 disc. The disc is housed in a standard case and opens to a series of trailers for other Well Go releases before reaching the main menu.

'Z Storm' may have had its story issues by the picture quality for this 2.38:1 1080p transfer is top notch. Really the only thing I can say to knock the score down is a bit of boosted contrast levels and some slight banding in places. Shot digitally, detail levels are "knock it out of the park fantastic" - again most of the time. When the movie moves to darker scenes, those pesky contrast levels can make the film look a tad too bright in spots, flatten the image, and can make the detail levels smooth out in slightly unattractive ways. Otherwise, this is a darn good looking image as colors have a beautiful pop to them with accurate flesh tones and black levels are for the most part very stable offering a nice sense of depth. All around this is another great looking disc from Well Go USA.

'Z Storm' is graced with a robust Cantonese DTS-HD MA 5.1 audio track. Dialogue is crisp and clean and comes through with perfect clarity. Sound effects and the film's score occupy their own separate spaces and really help to round out the surround elements making the track feel consistently alive and present. Where things get a bit of a kick down is on the levels front. Since this movie really is largely a talking film, the sudden shifts to action beats and explosions may force you to adjust the volume levels. These moments are so sharp and sudden it's difficult to accommodate the shifts from loud to soft without tweaking the volume a notch or two. I wouldn't normally detail this so much, but since this movie is such an odd duck at times, it's hard not to notice these things when they happen. Still a very strong track and I'll tip my hat again to Well Go because they consistently bring a quality A/V presentation to their titles.

Making Of Z Storm: (HD 5:12) A very brief EPK extra feature that gives only a cursory glance at the film without much of an in-depth look at the themes, story, or the actors and crew involved.

Interviews: (HD 24:52) Actors Louis Koo, Gordon Lam, and Michael Wong talk about their characters - it's very promotional material and doesn't provide much in the way of depth.

Trailer: (HD 1:36) The trailer is a pretty decent sell of the movie, and actually looking at it after the fact it kind of showcases the disjointed feel of the film.

'Z Storm' is tough to love, the tantalizing premise being a big problem for the movie. Had it ben a bit more earnest and beefed up the importance of the characters and how the situation they find themselves in affected them personally - it could have been great. As it stands, it's just mediocre at best. Well Go USA does an impressive job pulling the A/V presentation of this Blu-ray together, but the extra features lack any real depth to be worth the time. At the end of the day, I'm calling this one as a rental.

Sale Price 13.58
Buy Now
3rd Party 13.58
In Stock.
See what people are saying about this story or others
See Comments in Forum
Previous Next
Pre-Orders
Tomorrow's latest releases