Back to the Jurassic - 3D

Ernie, his little sister Julia, and his best friend Max accidentally start a time-machine while playing in Max's inventor father's workshop and find themselves transported back in time 65 million years, where they are adopted by doting dinosaur mom Tyra (Melanie Griffith) and a rambunctious dinosaur named Dodger (Rob Schneider). If they ever wish to make it back home they must steer clear of their evil dinosaur rivals (William Baldwin and Stephen Baldwin) and rely on the help of their mother Tyra and Dodger after all, family isn't always just the one you re born into!

With a clear, unmistakable moral message on responsibility we can see coming from 66 million years away, 'Back to the Jurassic' manages to dazzle the imagination in spite of its one-dimensional style of animation and even more simplistic plotline. Then again, simplicity is to be expected in a family-friendly feature targeted at the youngest among us while also tapping into the collective childhoods of parents. No need to complicate matters in a straightforward tale about mischievous skateboarder Ernie (voiced by Pamela Adlon) in need of a tough-love lesson on culpability. Indeed, the story, which somehow required four writers to complete, reaches its most dramatic peak when Ernie's devil-may-care selfishness makes becoming a permanent fixture of the fossil record a sad possibility.

Given the movie's subject matter, it's a sad state of affairs when today's kids must travel back in time to the Cretaceous Period in order to learn the value of being more responsible while also appreciating the rule-setting structure of their parents. And that's precisely what's suggested here when our reckless main protagonist accidentally trips the ON switch to the egg-shaped time machine, sending his little sister Julia (Tara Strong), best friend Max (Yuri Lowenthal) and himself to a time when dinosaurs ruled the world. An expecting T-Rex mother takes the terrified but curious trio as her offspring although they look nothing like dear-ole mum, and despite communication barriers, the large pink reptile raises them with strict rules while also encouraging to survive and fend for themselves. Seeing as how the filmmakers educate young viewers on the varied dino species, they apparently show there's a lesson to be learned for parents as well, and it's coming from the mighty King of the Predators turned protective mamma. 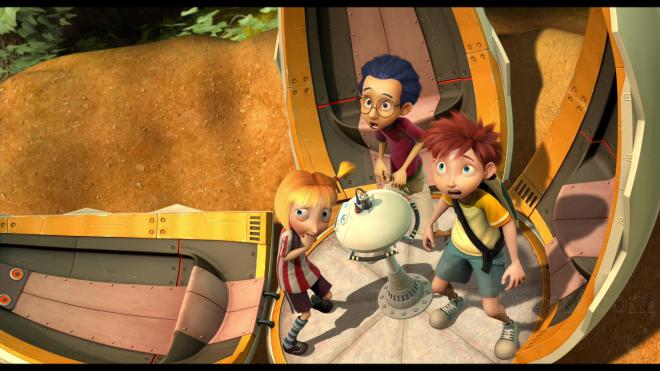 Before audiences generate any ideas that the human parents don't care for their children, we switch back to the fictional modern-day town of Terra Dino — I'm guessing a twist on Encino. While the kids continue to explore and Ernie hides the key to their return home, concerned mom Sue (Jane Lynch) and Max's dad, Dr. Santiago (Fred Tatasciore), devise a rescue mission using mom's electric car. If you're going to travel to the age of the dinosaur, it probably wouldn't be wise to show up in a vehicle that runs on fossil fuel. It's suggested that Sue and mommy dino Tyra (voiced by Melanie Griffith) share a protective instinct that's obviously prehistoric and instinctual, made poignantly clear towards the end when the two lock eyes and their faces fade from one to the other. This is the sort of in-your-face filmmaking that takes place throughout the movie, but thankfully, it's not to the point of being eye rolling. An odd-looking, bird-like orphaned Dodger (voiced by Rob Schneider) breaks up the monotony and obvious themes with hyperactive goofs that are sure to mesmerize kids with slapstick laughs.

All in all, 'Back to the Jurassic' isn't as terrible as it may initially appear, particularly for the little tykes of the family. Their eyes are sure to be glued to the screen right from the start. However, things grow a tad hairy towards the final half hour when a pair of Sarcosuchuses, known as the Sarco brothers, Surly (Stephen Baldwin) and Sarco (William Baldwin), threaten the kids, and Tyra throws herself into a rather nasty brawl. It's pretty violent and suspenseful for a children's flick but nothing the little ones probably can't handle. For parents, it's the sort of action that builds interest. While throwing in a problematic time paradox into the equation, the filmmakers also draw inspiration from the likes of 'The Lion King' and 'The Lost World: Jurassic Park' — and possibly 'Hot Tub Time Machine' with the whole fizzy soda drink serving as the missing ingredient for the time machine to function. Altogether, the animated feature, originally titled 'Dino Time' but changed to coincide with a certain summer blockbuster, is entertaining enough for kids, and parents will enjoy the positive message.

Alchemy brings 'Back to the Jurassic' to 3D Blu-ray as a two-disc combo pack. A Region A locked, BD50 disc containing both versions of the movie sits comfortably opposite a DVD-5 copy of the movie. Both are housed inside a standard blue keepcase with a shiny, embossed slipcover. After a few skippable trailers, viewers are taken to an animated screen with the usual menu options and music. When selecting "Play," the option for picking 2D or 3D is offered.

The independent children's feature travels back to the Cretaceous Period and sadly, the animation seems to have originated from the same era. Still, the 1080p/MVC MPEG-4 encode comes with much to appreciate though it doesn't really pop in the 3D world. Don't get me wrong, the picture shows lots of depth and for the most part, there is excellent separation between various objects. Distance of background objects from the foreground creates a nice sense of space and expansion, particularly during action sequence, and there are not any noticeable issues with ghosting and crosstalk, which is great. But the problem is that parallax is not very convincing with much of the video looking a bit flat or with very little depth perception. Several pop-up gimmicks, however, brilliantly remind viewers they are watching a 3D movie, especially scenes with little blue objects floating in midair.

Presented in its original 1.85:1 aspect ratio, the image is frankly best viewed as a 2D film where dimensionality feels more natural and consistent. Fine lines and object are distinct throughout, showing lots of detail in the foliage, the clothing of characters and around dirt trails and rock formations. Contrast is comfortably bright and well-balanced with vivid, crisp whites that make the video really shine. Black levels are inky and accurate with strong, excellent shadow delineation, such as the final fight scene underground near an erupting volcano. Primaries are richly saturated and energetic while secondary hues are full-bodied and vibrant, making the entire high-def presentation come to life.

The animated time-traveling kid's flick roars its way to home theaters with a somewhat timid but still enjoyable dino howl. Given the preposterously fictional technology shown in the movie for breaking the known laws of physics, it's a bit of a head-scratcher that producers opted for something as outmoded as a Dolby Digital surround soundtrack. Thankfully, the legacy codec isn't a complete letdown, delivering a welcoming and spacious soundstage with effortless movement and convincing off-screen effects between all three front channels. Dynamic range is clean and surprisingly extensive, exhibiting excellent separation and detail, even during the loudest, action-packed moments. Vocals remain clear and intelligible throughout while the low-end provides palpable weight and at times shocking intensity for a children's animated feature. Rear activity is not particularly notable, but it's employed effectively with several amusing atmospherics and fluid panning effects during action sequences.

With a clear, unmistakable moral message on responsibility we can see coming from 66 million years away, 'Back to the Jurassic' manages to dazzle the imagination in spite of its one-dimensional style of animation and even more simplistic plotline. The 3D Blu-ray arrives with excellent video though the 2D version is the stronger of the two and a very good audio presentation in spite of only being offered in legacy Dolby. Though lacking in bonus features, the overall package makes for a decent watch for the whole family.

Sale Price 3.37
Buy Now
3rd Party 3.25
In Stock.
See what people are saying about this story or others
See Comments in Forum
Previous Next
Pre-Orders
Tomorrow's latest releases