Join all seven dwarfs for an adventure as big as they are small! It’s the eve of Princess Rose’s 18th birthday. Everyone in the kingdom has come to Fantabularasa Castle to celebrate including Snow White, the Seven Dwarfs, Cinderella and Red Riding Hood. But just before the stroke of midnight Bobo, the youngest dwarf, accidentally pricks the finger of Princess Rose (a.k.a. Sleeping Beauty) with a cursed needle and sends the kingdom into a century-long slumber! To find Rose’s true love Jack to save her with a kiss, Bobo and the other six dwarfs must go on a treacherous journey, face a fiery dragon and outwit the jealous, scheming and evil witch, Dellamorta!

Sometimes you just have to let a kids movie be a kids movie. No matter how annoying it may seem, no matter how trite the jokes may be or for that matter how potentially irritating the songs are - they weren't designed with an adult in mind. So why fight it? 'The Seventh Dwarf' knows its target audience well enough to probably hold their attention for 88 minutes and it does toss in a few jokes for Mom and Dad to potentially enjoy.

On the eve of her 18th Birthday, Princess Rose (Peyton List) sends her one true love Jack (Jack and Rose...think about that a moment) out into the far-reaching forest for safety. Why would a lowly cook's assistant need to be saved? Because of an evil curse placed upon Rose by the wicked witch Dellamorta (Nina Hagen) where if she pricks her finger on anything sharp, she falls into an eternal slumber - along with everyone else inside the castle. In the event that Dellamorta's curse comes to pass, Rose needs Jack (James Frantowski) to come save her by giving her a kiss as she sleeps. While Rose spends the last days before her birthday dressed in a full suit of armor, Jack  goes off to the forest to live with the Seven Dwarfs - only he doesn't get there.

Smelling out the plot to spoil her plans, Dellamorta uses her bumbling good-natured dragon Burner (Norm Macdonald) to kidnap the poor hapless Jack and chain him up. Unaware of Jack's mission and their need to protect him, the Seven Dwarfs including Bobo, Tschakko, Cloudy, Sunny, Cooky, Ralphy and the slow-moving Speedy head off to Rose's 18th Birthday Party bash that is to be attended by Snow White, Red Riding Hood, and a host of other fairy tale favorites. After the Dwarfs accidentally allow Dellamorta to enact her curse, it's up to them to find Jack and put everything right.

'The Seventh Dwarf' is one of those movies that tries very hard to do what other movies like 'Shrek' and some of the more recent Disney outings like 'Tangled' and 'Frozen' have already done better. With a "shared universe" setting where all of the fairy tale characters know each other, there is a lot of fun to be had with the subtle references to characters, but a lot of this film feels a bit late to the party. As a German production that has been imported to the U.S., I suppose it's possible that this movie was fresh and hip in its native lands upon initial release, but over here it suffers from a sense of "been there, seen that." Will that bother your kids at all? I doubt it.

Overall 'The Seventh Dwarf' (which refers to Bobo) is a fun little movie kids should get a kick out of. The songs may not be as catchy as "Let It Go" but Dellamorta's tune "Revenge is a Dish Best Served Cold" gave me a chuckle because of the obvious 'Star Trek' reference. There are plenty of other songs about cake, friendship and other things kids should enjoy while Mom and Dad can have a laugh or two at some of the cultural jokes like Red Riding Hood and The Wolf doing red carpet fashion commentary for Rose's party. Like I mentioned previously, this film feels an awful lot like a 'Shrek' clone. That isn't necessarily a bad thing when it comes to entertaining kids. This is most definitely a flick for the young ones in the house. 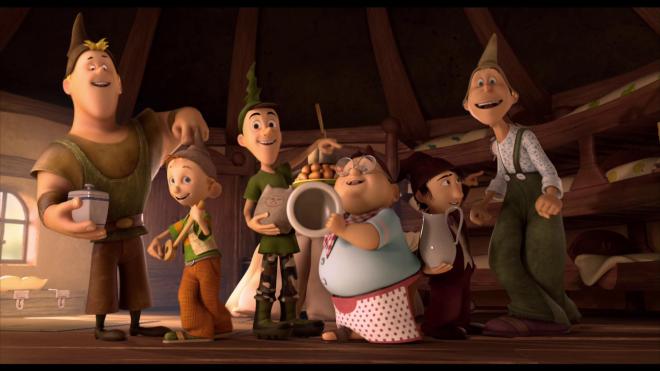 While kids should get a kick out of it regardless of criticism, I do have some issues with the movie. For starters - the animation. While I dig the efforts of CGI artists, the animation for this film leaves a lot to be desired. When you compare the beautifully rendered backgrounds to the cheap-looking, weightless, dead-eyed character renderings, 'The Seventh Dwarf' becomes a bit of a disappointment. From the goofy dwarfs (who don't really look all that much like dwarfs) to the dragon Burner, to our hero Jack - none of the characters feel like they're organically part of the world they inhabit. The only decently rendered character who actually shows some character in their appearance and has a sense of "weight" is Dellamorta. On top of that you have the voice acting. While for the most part it's pretty decent, it doesn't exactly "wow" either. The only "Name Actors" associated with this movie being Peyton List and Norm Macdonald have so few lines, it feels odd that they're prominently featured above the film's title on the box art.

As a piece of animated storytelling, I'd call 'The Seventh Dwarf' "serviceable" at best. I'm pretty sure kids up to around seven or eight years old should have a good time of it and may well love it even, but if you're an adult with an appreciation for animation or innocent children's entertainment, I'd suggest you look elsewhere. This is one of those movies to pick up if your posse of kids have seen all of the age-appropriate movies in your collection and aren't exactly old enough for things like 'The Shining' or 'The Silence of the Lambs.'

'The Seventh Dwarf' arrives on Blu-ray thanks to Shout Factory. Both the 3D and 2D presentations are pressed onto a single Region A locked BD50 disc and housed in a standard double-disc case with slip cover. A 2D only presentation with extra features is available on an accompanying DVD-9 disc. Also included, and I believe this is new for a Shout Factory release, is a voucher for a digital copy of the film. This appears to be their own proprietary digital copy format that allows you to download the film in various sizes and formats to be transferred to the portable device of your choice.

The 2D 1.85:1 1080p image quality of 'The Seventh Dwarf' is appropriately colorful and pleasing. Everything is crisp and clean and offers some nice detail levels - if the item in question is part of the background renderings. Character renderings and objects that said characters interact with leave a bit to be desired. While colorful and provide some nice character design work, things just feel flat and weightless when compared to a tree or a stone pillar or a rock that a character may be standing next to. Even in the 2D format there is a nice sense of depth and object placement - even if the characters can feel almost like popup book insertions. Colors are bright and wonderful, blues, greens, and especially the color red have a lot of pop to them.

Thankfully the 3D image quality holds up fairly well. The character renderings still have that inorganic vibe to them, but with the added depth of the 3D image, they feel a little more weighty and present to what they're interacting with. Even with the darkening polarized glasses, the image appears bright and beautiful as if it were tweaked to account for the presence of the glasses. The real stunner with this presentation is the background depth - the fairy tale kingdom can appear to go on for miles and miles. When the image is a bit busier and there are a lot of characters occupying the scene, the 3D can flatten a bit, but not so terrible as to knock the score for. In fact, my only real complaint about the 3D presentation is if an object or character occupies too much of the far left or right edges of the screen, there were some slight instances of ghosting. Otherwise, this movie offers plenty of deep image depth while providing plenty of "pop out" effects - Dellamorta's mechanical spring-loading pricking device is a great example of an object appearing to leap out of the screen. While I feel the 3D improved the look of the movie, it's benefits are only a modest improvement. If you don't have a home 3D setup, you're not really missing anything by sticking with the 2D presentation.

With an English DTS-HD MA 5.1 audio track, 'The Seventh Dwarf' gets some strong marks. The surround channels are constantly alive and working - which is nice because of the numerous effect elements at play. Sounds tend to come from all over the place because of how a scene may be populated or if there is a song with a lot happening throughout; the Cake song in particular offers some strong imaging. Dialogue comes through crisp and cleanly and keeps largely to the center channels. Rose's party scenes are the most detailed and layered given the number of characters on screen, while quieter moments offer plenty of atmospheric and background sounds to maintain an organic presence to it. All around a solid track. A French language track is also available, but I wish the original German had been included as well. I'm curious to know the changes that were made between the translations.

Character Profiles: This is a click through feature where each character is given a bio sheet of information. Since it's not animated, you're probably going to have to read it to your kids.

Fairy Tales: (HD 2:09) Featuring Peyton List and Norm Macdonald talking about doing the voice work for the movie as well as their favorite stories growing up as children.

Sing-Alongs: (HD 5:20) Songs Cake and Friend are given the sing-along treatment with easy to follow words.

Downloadable Royal Birthday Invitation: included on the DVD disc and requires a DVD-ROM drive for your computer in order to print out.

'The Seventh Dwarf' is just one of those movies that aims for their child target audience and leaves only a few tidbits for adults to enjoy. All around it's an innocent piece of fun for the kids, but those expecting something on the Pixar creativity level will probably feel a bit disappointed. Like I said, it's for kids and they're the ones who should be entertained by this flick. The image quality in 2D and 3D is quite strong, and the audio is pretty great. Beyond a sing-along feature, extras are virtually nonexistent. My call is to give it a rent first. While I'm pretty sure kids will dig it, I'm not sure how necessary of a movie it is to own.

Sale Price 10.98
Buy Now
3rd Party 3
In Stock.
See what people are saying about this story or others
See Comments in Forum
Previous Next
Pre-Orders
Tomorrow's latest releases