While practicing the tricks of the trade, a neophyte "hacker" accomplishes the nearly impossible: he hacks the highly secured computer at the Ellingson Mineral Corporation. But in doing so, he unknowingly taps into a high-tech embezzling scheme masked by a computer virus with the potential to destroy the world's ecosystem! And when the young hacker and his pals are targeted for the crime, the group must launch a massive cyberspace attack - one that will hopefully clear their names and prevent ecological disaster.

As cheesy and silly as it may be — riddled with lots of absurdly comical dialogue and tons of techno jargon — 'Hackers' still manages to entertain twenty years later. At the time of its release, computers and the internet inside the home and in the hands of private citizens were still a relatively new concept. The World Wide Web was still a strange and foreign world to the masses, made more easily accessible to the public thanks to early web browser Mosaic only a couple years earlier. The world of cyberspace was little known to most moviegoers, and they probably knew even less of the hacker subculture. So, part of the fun in this 1995 sci-fi thriller was the fact that the subject matter was familiar to only a select few while also delivering enough action and excitement to attract a wider audience. In essence, the movie effectively turned its finger on the pulse of a revolutionary new trend into something cinematic.

Admittedly, being ahead of its time or keeping to the latest craze is not reason enough to praise any production, but the fact that it does so in an entertaining fashion is. Director Iain Softley ('K-PAX') worked closely with cinematographer Andrzej Sekula ('Pulp Fiction,' 'American Psycho') and stage designers for creating the world of computers and their interior workings. The end result, of course, is the furthest from reality — a bunch of silly gibberish and ridiculous mumbo-jumbo — but it nevertheless turned the unfamiliar world of cyberspace into visually enthralling displays of fantasy. Softley and his crew transformed the strange and unknown into a flamboyantly colorful universe that seemed enchanting and thrilling, a space where the uninvited and marginalized could feel like Indiana Jones exploring the undiscovered territory. The audience now knows and understands the attraction these talented teens have for hacking into other systems.

Softley and Sekula keep their viewers captivated with other cleverly amusing visuals, other than the wide array of primaries continuously decorating the screen as if to further entice viewers into the forbidden candy shop. The camera navigates overhead and through a circuit board with pulses of electricity beaming in all directions. These imaginative graphics — which again intentionally have nothing to do with how computers work in real life — smoothly dissolve into the busy, high-rise packed streets of New York City, suggesting that the digital age is already here living amongst us, working unseen behind the curtain of daily life. Almost all of society is controlled by computers, from traffic lights and oil tankers to banks and the personal records of private citizens. The movie turns that last part into a bit of comedy of relief when Secret Service Agent Richard Gill's (Wendell Pierce) — "Hacker enemy number one" — life is turned into chaos. 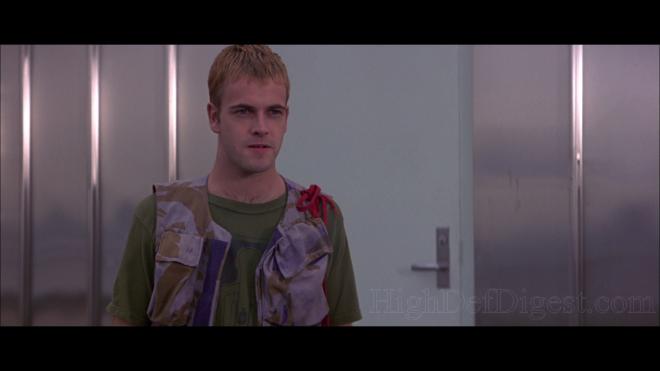 With great direction and excellent photography already on its side — however, corny and unrealistic as it is — the only thing remaining is a good story to match, and even in this respect, the film successfully infiltrates the expectations of moviegoers. It isn't a masterpiece by a long shot, but Rafael Moreu's script immediately catches our attention with the news of an eight-year-old genius who cashed 1,507 systems in a single day. Seven years later, the kid grows up to be Jonny Lee Miller, a high school senior year haunted by his past but still up to his old tricks, only much more low-key. It doesn't take long before he makes other hacker friends (Renoly Santiago, Matthew Lillard, Laurence Mason and Jesse Bradford) while also making a rival in Kate Libby (Angelina Jolie). The tale is simple and straightforward, a comedy of sorts set in a modern high school where Miller's rival soon becomes the love interest.

But in a movie in touch with an underground subculture that seems threatening to the mainstream public will obviously introduce an outside conflict that demonstrate the group is a threat to no one. Yes, this makes the plot a bit predictable, but it's the ride to that foreseeable conclusion that matters. For the first half, Moreu goes out of his way to make these kids likable, good-natured and innocent of inflicting harm to anyone. But when Fisher Stevens enters the picture as hacker turned computer security officer "The Plague," Miller's "Crash Override" is forced to call upon his talents to prove he and his friends are innocent of a potentially destructive computer virus.

It's a fun sci-fi romp that updates the familiar thriller formula to the modern digital age while also throwing a few subtle allusions into the mix. Lillard's Emmanuel Goldstein is from George Orwell's classic novel, "The Gibson" supercomputer refers to sci-fi author William Gibson, Santiago's Phantom Phreak is a phreak, as opposed to the stereotypical hacker, and one character quotes from the actual The Hacker Manifesto by notorious hacker  "The Mentor." It's a smart display of knowing and entertainment which makes 'Hackers' a great deal of fun to watch and has garnered a well-deserved cult following.

Shout Factory unleashes 'Hackers' to Blu-ray as a 20th Anniversary Edition. The Region locked, BD50 disc is housed inside a standard blue keepcase with reversible cover art. At startup, viewers are taken to a colorful menu screen with the usual options, music and full-motion clips.

The keyboard cowboys hack the Blu-ray system with a strong, if also a bit on the weak side 1080p/AVC MPEG4 encode. To be fair, the video offers an improvement over its DVD counterpart, but it's not a hands-down, significant upgrade. In fact, back-and-forth comparisons reveal this transfer likely came from the same master used for that MGM release from 1998. On the plus side, the source used appears to be in excellent condition, showing very few white and black specks throughout, but the film would greatly benefit from a fresh remaster of the original elements.

Presented its original 2.35:1 aspect ratio, much of the video is somewhat drab and dull with contrast levels that oddly fluctuate from one scene to the next. Several moments are comfortably bright with excellent clarity and resolution, showing a great deal of appreciable definition of the finer details, but at other times, the picture suddenly goes flat, making shadows seem murky and grayish in other areas while highlights bloom a tad. Blacks, for the most part, look good, but they also tend to waver from rich and true to cloudy. Colors benefit the most from the jump to high-def with primaries looking vibrant and energetic, but the overall palette, too, varies at times and skin tones often appear flushed and sickly. The presentation isn't a complete loss, but it's only a minor improvement to its predecessor.

On a brighter note, the cult sci-fi thriller travels the information super highway with a generally pleasing DTS-HD Master Audio stereo soundtrack. Unlike other releases from Shout Factory, this is the only option offered for this edition of the movie, which is rather disappointing and leaves me wondering about the decision for doing this. As far as I'm aware, the film was recorded in digital surround sound — and IMDb.com lists DTS as the codec of choice — and presented in the 1998 DVD in legacy 5.1 Dolby Digital. So, why is this version only offered in stereo?

Whatever the case may be, the two-channel track isn't a total loss or a disappointment, delivering a wide and welcoming soundstage with lots of activity to keep the listener engaged. Off-screen effects are convincing and discrete while objects smoothly pan across the screen without a hint of distortion. Dialogue reproduction is clean and intelligible although a couple moments don't come in as clear as they should. The mid-range seems somewhat even and uniform, not really ever offering much distinction and separation between the various frequencies. This is most apparent whenever the electronic tunes suddenly play in the background, which is all the more disappointing because they are restricted to the fronts rather than enveloping the viewer as I remember them doing. Low bass is also pretty light and weak, not really providing much weight to the song selections. Don't get me wrong, there is appreciable bass to enjoy, but it's not as strong or commanding for such a music-heavy soundtrack.

As cheesy and silly as it may be, 'Hackers' still manages to entertain twenty years later, and it's garnered a well-deserved cult following. Starring Johnny Lee Miller, Angelina Jolie, and Fisher Stevens, this is a fun sci-fi romp that updates the familiar thriller formula to the modern digital age while throwing a few subtle allusions into the mix. The Blu-ray arrives with a strong audio and visual presentation, but it doesn't quite deliver the marked improvement over its DVD counterpart expected. Nonetheless, with a brand-new retrospective, the overall package will be enough to tempt fans to add this disc to their collections.

Sale Price 15.99
List Price 24.97
Buy Now
3rd Party 11.99
In Stock.
See what people are saying about this story or others
See Comments in Forum
Previous Next
Pre-Orders
Tomorrow's latest releases