In a totalitarian society a few years from now, innocent 'deviants' like Paul (Steve Railsback) and Chris (Olivia Hussey) are forced into government camps where their 'rehabilitation' includes beatings, rape and torture. But the most shocking brutality is still to come when they are chosen for the 'Turkey Shoot,' a hohrrific hunt by the sadistic warden and his wealthy friends using prisoners as human prey.

"Freedom is obedience, obedience is work, work is life."

There's nothing quite like a great pizza and beer movie. Movies that are so viscerally entertaining that any amount of violence of depravity on screen stops being shocking and just becomes incredibly entertaining. Scenes of torture, murder, mayhem - all of it becomes gloriously over the top entertainment that leaves you hooting and howling with joy. 1982's 'Turkey Shoot' also known as 'Escape 2000' starring Steve Railsback and Olivia Hussey isn't just your run-of-the-mill exploitation movie - it's an Australian exploitation movie making it a hyper-violent and entertaining Ozploitation flick in all of the best ways!

In the near future, the world was tossed into chaos. Out of the ashes of the world wars rose a new global power, a strict fascist regime that disposes of undesirables and deviants to ensure societal standards are maintained. If you are a citizen that is found to be a deviant or undesirable due to your political beliefs, art, or anything that can be made up on the spot, you are shipped off to a re-education camp for societal reconditioning. Charles Thatcher (Michael Craig) just so happens to run one of the most effective camps located on an isolated island. Part of what makes Thatcher's camp so effective is that most of the inmates never reenter society. Unfortunately, for new inmates Paul Anders (Steve Railsback) and Chris Walters (Olivia Hussey), Thatcher's camp likes to play a particularly twisted and diabolical game with its inmates.

As Thatcher has risen in the ranks of the new order, his camp has become a desirable vacation spot for society's elites. These people don't come there to rest on the beach or swim in the surf or be served strong alcoholic drinks in coconuts with little umbrellas in them. No, these people are there to hunt. They're not hunting the local wildlife; they're there to hunt the most dangerous game of all, human prey. And who better to hunt than the most undesirable members of society? Thatcher has some new clients visiting with some state-of-the-art lethal toys and they get to pick their targets.

Secretary Mallory has his tranquilizer dart gun and he's very keen on hunting down the beautiful Chris. The huntress Jennifer (Carmen Duncan) has a crossbow with explosive tips and has her sights set on the blonde bombshell Rita Daniels (Lynda Stoner). Tito (Michael Petrovitch) is interested in hunting down the half-blind Dodge (John Ley) using his dune buggy bulldozer with a machine gun as well as his mutant cannibal circus freak. Thatcher himself uses a routine high-powered rifle with the intention of executing political prisoners like Paul and Griff (Bill Young). The prisoners are given new ID cards under the disguise that if they manage to survive until sundown they will be set free. Only they learn all too quickly that once the game has begun, they have no chance of survival under the rules of the game. If Chris, Paul, Griff, Dodge or Rita have any hope of survival, they're going to have to get the upper hand and take the fight directly to the hunters as well as the private army that controls the camp. 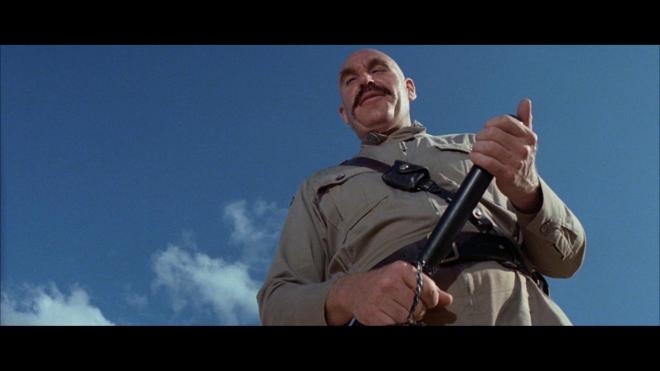 Directed by Brian Trenchard-Smith, 'Turkey Shoot' is a great bit of exploitation cinema fun from start to finish. If you're a fan of the genre, if you dig on movies like 'The New Barbarians,' this is the right kind of movie for you. If you don't have a humorous love for extreme gratuitous violence, this isn't your source for Friday night family viewing. 'Turkey Shoot' is a movie that knows what it is and revels in every gloriously grotesque moment. As a member of the audience, you wait for every bit of onscreen violence to occur in a cavalcade gore, fake blood, and chunky dismembered body parts.

It's a difficult task to assess 'Turkey Shoot' in the terms of "good" or "bad" filmmaking. essentially the film is 'The Most Dangerous Game' meets 'Naked Prey' with some dashes of '1984' for a sense of political tone. Whichever way you want to look at 'Turkey Shoot' you're sure to come away with a great sense that it's just awesomely entertaining. It's a movie that goes out of its way to make you squirm with the sights of gore and violence, but at the same time its goal is to also give you a great bit of fun. To that effect, this is a movie that needs to be seen with a room full of people. I watched this with my wife and we had a blast with it, but we kept telling each other how great it would be to watch with the cult movie group we host. 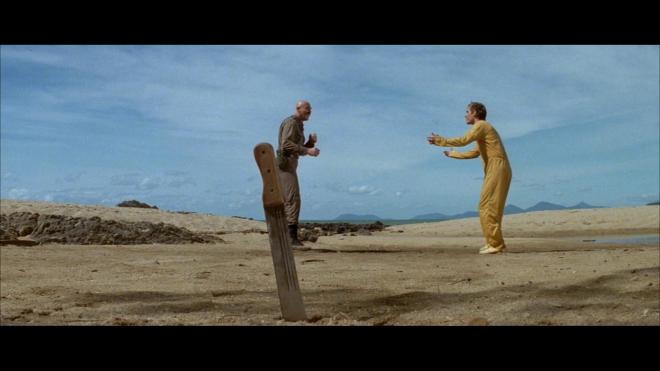 'Turkey Shoot' is a movie that likes to take its time. It goes to great lengths to make you despise the prison guards and the people running the camp so that when they reach their grotesque end, you are cheering with absolute joy. The film is a great ride from the first frame to the last, but as I mentioned before, it's not a movie for everyone. Personally I would say that everyone should see it, but then I know that not everyone's tastes are as goofy as mine. If you've yet to experience an Ozploitation flick - 'Turkey Shoot' is a great introduction to the exploitation sub-genre from down under.

'Turkey Shoot' makes its Blu-ray debut thanks to Severin. Pressed on a Region Free BD25 disc, the disc is housed in a standard case and opens directly to an animated main menu with standard navigation features.

Given it's low budget origins and the age of the film, I was expecting 'Turkey Shoot' to look a lot worse than it does. I am actually happy to report that the film's 2.35:1 1080p transfer holds up very well. Fine film grain has been retained offering vastly improved detail levels over other previous home video releases. Colors are rich and bright and have plenty of primary pop - especially the thick, gooey, barbecue sauce-red fake blood! Black levels are overall pretty solid as much of the film is brightly lit with plenty of open sunlight giving the image the right amount of shadow separation to create a sense of depth. Darker scenes suffer from a little bit of crush and a flattening effect, but thankfully those moments are very few and far between. In point of fact, the only thing that is really holding this score back is the condition of the print. The print suffers from some slight but frequent speckling, and there is a blink and you'll miss it moment where the frame looked stained or discolored. Otherwise, this is an exceptional transfer that serves the gory nature of the film perfectly.

Sporting a DTS-HD MA 2.0 track, the audio quality for 'Turkey Shoot' is fantastic for the film that it is. Mind you, due to the film's skimpy budget constraints, the actors and their lines weren't properly looped in post, so there is quite a bit of rubber mouth happening throughout. Additionally, some actors had to be dubbed by a different performer altogether. To that end, the dialogue is crystal clear and never a strain to hear or understand. There is some channel movement with this stereo track, but it has a hollow sort of artificiality to it. All of the film's sound effects from guns firing to explosions to blood squirts are heightened for maximum effect, so a lot of what you hear doesn't quite sound natural. But then again, this odd sound mixing actually works to make the film that much more enjoyable. Levels are perfectly balanced and keep to the midranges so there aren't any spikes or drops in the track. Free of any age-related issues, this is a fantastic audio track that complements the film perfectly.

Audio Commentary: Director Brian Trenchard-Smith goes solo detailing the production, how the script was affected by the budget slashing. A great listen if you want to learn how quickly a production can go to hell.

The Ozploitation Renaissance: (HD 26:34) Director Brian Trenchard-Smith, Cinematographer Vincent Monton, and Producer Antony I. Ginnane talk about the history of the Ozploitation film movement, it's roots as T&A pictures and how it moved into the realms of exploitation horror. It's great to see these three guys talk shop and where they got their starts and what drew them to producing over the top content.

Not Quite Hollywood - Extended Interviews: (HD 1:17:08) Brian Trenchard-Smith, Antony I. Ginnane, Steve Railsback, Lynda Stoner, Roger Ward, Gus Mercurio, and Bob McCarron discuss the making of the film, the sudden slashing of the budget, the script revisions and actually shooting the movie in the wilds of Australia. A very in-depth set of interviews and incredibly fascinating. Fans of the film should absolutely watch this.

Turkey Shoot Trailer: (HD 2:46) The trailer does a great job of selling the film. It's in rough shape and really helps you appreciate how great the main film looks.

Turkey Shoot: Blood & Thunder Memories: (SD 23:45) This is a great featurette featuring Michael Craig, Lynda Stoner and Roger Ward talking about what they thought of the movie, most of them don't sound too keen on it and mostly did it for the work, but they still offer some great insights into the process.

Brian Trenchard-Smith Interview: (SD 9:48) An older interview with the director as he briefly discusses the film's budget troubles and the effects on the script and the rest of the story.

What more can I say about 'Turkey Shoot' that would convince you that it's worth watching - or avoiding all together for that matter? Either you're going to love this movie, or hate it completely. I loved every moment of it, but I can see this one not being everyone's cup of tea. Thankfully Severin has done a splendid job pulling this Blu-ray release together offering a quality A/V presentation as well as a massive number of in-depth extras to sort through. I'm calling this one Highly Recommended if exploitation cinema is your brand of entertainment.

Sale Price 29.95
Buy Now
3rd Party 27.72
In Stock.
See what people are saying about this story or others
See Comments in Forum
Previous Next
Pre-Orders
Tomorrow's latest releases