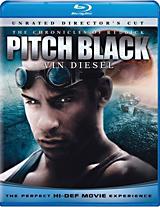 Before there was Riddick the "icon," there was 'Pitch Black.' It is always interesting to revisit the original film that spawned a franchise (or hoped-for franchise), especially when the film in question wasn't really conceived to be the launching pad for a toy line. Perhaps that's why I quite enjoyed watching 'Pitch Black' a second time for this review, because it makes no apologies for what it is -- a no-frills horror film with action, suspense, scares and very little pretense. Sure, this one may be little more than another 'ALIEN' rip-off, but because it is largely free of all that 'Chronicles of Riddick' mythology gunk it sure is a lot of fun.

As 'Pitch Black' begins, we find ourselves aboard a nondescript transport ship in deep space. It is populated by another one of those ragtag band of blue collar space workers (led by Radha Mitchell as Pilot Fry and Cole Hauser as Lt. William Johns), but they are also carrying one very special piece of cargo -- legendary master criminal Richard Riddick (Vin Diesel). Unfortunately for the crew, the ship soon crashes on a barren planet and Riddick is now loose, though he will soon become the least of their worries. Seems they are not alone on the unknown planet, and whatever is out there lives in the darkness -- and it's hungry. With their numbers quickly diminishing, the crew will have to form an unlikely alliance with Riddick if they hope to survive.

'Pitch Black' is fun on a lot of levels. It has a nifty little gimmick -- the planet's creatures can only be seen with night vision so they're essentially invisible -- and a nice assortment of characters, however stock they may be. Writer and director David Twohy nicely exploits the shifting alliances between Riddick and the crew, which gives 'Pitch Black' a bit more depth than your standard monsters-in-the-dark B-movie. Good and evil begin to lose their meaning as each character is compelled to commit acts that will reveal their true natures. Riddick's conflicting duality -- both heroic and mercenary -- leaves room for plenty of surprises in terms of body count, and who will eventually live and die is not as cut and dried as it first appears. That's rare for a horror flick these days, in which most of the victims announce their fates the minute they walk onscreen simply because they are so obnoxious.

Still, 'Pitch Black' ultimately lives or dies on the strength of its villain. Luckily, the creatures here are pretty cool. Sure, they are more than reminiscent of the grand dame of the modern monster movie, the Queen in 'ALIENS,' but they're still scary. My only complaint is that the CGI in the film is a bit weak (though I generally prefer mechanical effects anyway so perhaps I have a built-in bias). Interestingly, considering its massive-budgeted sequel, 'Pitch Black' was actually a fairly low-budget production. So while a few shots are chintzy, Twohy still makes the most of his limited purse strings by employing all sorts of effects (night vision, excessive stylization, creative use of dark and shadows) to keep the film looking expensive and polished. There is some pretty imaginative stuff in 'Pitch Black,' and if the plot is nothing new, Twohy's direction and the intriguing characters help make the film one of the better examples of its genre. 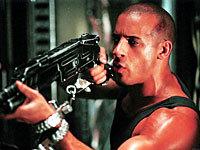 'Pitch Black' arrives on Blu-ray a good two years after the HD DVD. I found the latter a very good presentation when I originally reviewed it in 2006, and the same holds true now. We get a 1080p/VC-1 encode (2.35:1, and of the Unrated Director's Cut version) that doesn't offer anything new over the previous HD DVD, but remains impressive nonetheless.

'Pitch Black' is certainly a film of contrasts. The daylight scenes on the alien planet have been extremely tweaked, with completely blown out whites and an almost monochromatic use of deep oranges and cyan. It is all harsh and barren and desolate, which really serves the film well but does hamper detail. However, resolution is superior here, and I was able to detect fine details, such as the texture on a rock and color differentiations on landscapes, with ease. Though the image is not "sharp" per se due to the heavy processing, contrast is consistent and even across the entire grayscale and blacks are deep and pure.

Color reproduction is also well done, with hardly any chroma noise (which is surprisingly considering how pumped up the palette is) and no apparent smearing. Nighttime scenes are also impressive for the level of shadow delineation visible, and ironically, the improved resolution of high-def makes some of the effects look even more obvious (especially the rather phony-looking flying creatures). Overall, given the film's visual style, it is hard to imagine 'Pitch Black' looking much better than this.

Universal gives us an upgrade here over the Dolby Digital-Plus track found on the HD DVD. Though 'Pitch Black' already sounded quite good before, this DTS-HD Lossless Master Audio 5.1 Surround track (48kHz/24-bit) is just a little bit better.

I never thought 'Pitch Black' boasted the greatest sound design, it's generally aggressive and atmospheric. Unfortunately, the surrounds are inconsistently deployed. Discrete effects can be loud and blaring when trying to shock us, but some scenes suddenly go quiet, with little rear action. Still, this DTS-MA mix offers a hint better integration of the score and pumped-up ambiance. Transparency and panning remain solid, if not exceptionally improved.

Dynamic range is slightly extended. Low bass is the biggest benefactor -- the DTS-MA just sounded stronger and punchier. Upper ranges are just as clear and bright. Dialogue is fairly well-balanced, though there were spots I felt were obscured, so I had to bump up the volume on occasion. 'Pitch Black' is still not a reference track, but sounds quite good all-in-all. 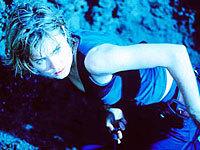 The same package of basic extras can be found on this Blu-ray as on the previous HD DVD and DVD versions of 'Pitch Black.' Unfortunately, there's not a lot of them -- most of the good stuff here can be found in the exclusives below. Video is presented in 480i/MPEG-2.

'Pitch Black' is a fun, if derivative, horror movie that is also notable for (almost) having launched a franchise. I continue to enjoy it a lot more than 'The Chronicles of Riddick,' so you can just skip that one and start here. This Blu-ray is quite nice, with very good video and audio, plus an array of bonus features and exclusives. 'Pitch Black' fans should definitely check this one out.