The handyman of horror is back with a new box of tricks in Toolbox Murders 2, a terrifying sequel to Tobe Hooper's 2004 reimagining of the 1978 cult favorite. Picking up directly after the events of Hooper's shocking film, Toolbox Murders 2 ratchets up the terror as it follows one of Hollywood's most twisted killers. Resurfacing in the darkest corners of the L.A. underworld with a serious axe to grind, the killer hammers out a plan to put the screws to a new victim: Samantha, the sister of his prey from his previous rampage. Soon Samantha finds herself held captive in a house of horrors and forced to undergo the most unspeakable tortures… with little hope of escape.

The makers of 'Toolbox Murders 2' don't waste any time in letting audiences know precisely what to expect for the next ninety-five minutes. Right from the start, a maniac holds a screaming woman by her hair over the famous Hollywood sign while her scalp begins to rip from the weight and she falls to her death. Suddenly, the same woman wakes from the nightmare in shock, only to discover the masked killer on top of her and he commences to viciously cut her face with a dirty utility knife. If the sight of any of this were not horrific enough, the filmmakers take it one step further with a gruesomely cringe-worthy scene of the knife stabbing the unnamed woman's eyes. As if to suggest a clever tee-hee twist to the madness, we suddenly discover the ghastly spectacle was the happy dream of the killer. All this happens in the first couple minutes before the opening credits.

For the remainder of the time, the movie doesn't stray much from this constant barrage of grisly depictions of cruelty and nastiness. It's a brutally gory display of hammers to the head, limbs cut with rusty saws, the cooking of human flesh and the seemingly endless torture of a young woman. For body horror fans, the special effects are impressive and incredibly realistic, sure to churn a few stomachs in the audience if not recoil in disgust from the buckets of blood spraying everywhere. Coming from a micro-budgeted production such as this, the amount of work that went into the stage design and makeup is all the more notable — a majority of the plot is set inside in the dank, dingy basement of the masked killer where decomposing bodies are continuously piling up. However, there isn't much of a story taking place here. At least, not one to engage viewers and make the mayhem anymore horrifying.

In fact, it's almost as if this movie — shot in and around various Los Angeles locations, probably without permission or the proper permits — was made for the sole purpose of demonstrating the skills of the crew. And that possibility wouldn't be too farfetched considering the director and cowriter is Dean Jones, best known for his work as special makeup effects artist. Making his feature-length debut as helmer, Jones knows how to make his audience cower in disgust, zooming in close on the grisly details and relishing in a slow, taunt-like pace that gives the killer some time to prepare before jumping into the savagery. As an excuse for this gleeful parade of tactless violence, the killer, known to fans as Coffin Baby, kidnapped Samantha Forester (Chauntal Lewis) and locked her in a cage where she's made to witness the bedlam while munching on a bucket of popcorn, first in horrifying revulsion but later in a desensitized stare. 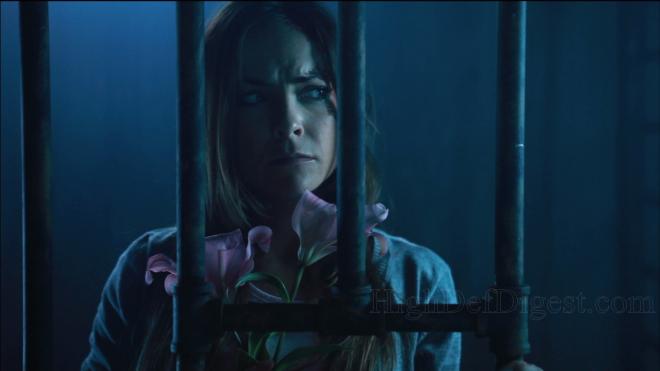 The story is told from the point of view of Samantha as she slowly spirals into insanity from the constant acts of murder. A few flashback sequences, similar to the dreams in the opening, provide the necessary exposition for understanding how she arrived in this predicament, but it doesn't work very well to the movie's benefits. Feeding audiences a few tidbits at a time and only when convenient to move the narrative along isn't much fun, especially when character development is lacking. Placing more emphasis on the pandemonium over story and character only succeeds at boring the audience because there's nothing to draw in our emotions. The plot's focus seems intent on the damage violence has upon Samantha's psyche, which could be a possible commentary on society finding entertainment in violence, but it's doubtful there could be that level of intelligence involved.

'Toolbox Murders 2' is a lifeless and poorly-conceived production that looks every bit as cheap as it was made, which is not a bad thing all unto itself. However, its cheapness is made all the more distracting because the story fails to capture and draw audiences in. Lewis is a strong actress in a role that could have been more demanding if the character were better developed and if the plot made a bit more sense. The lack of a motive behind Coffin Baby's reign of terror only leaves viewers questioning why this movie was made at all. It's supposed to be a sequel to Tobe Hooper's 2004 remake of 1978's grindhouse cult classic, but I don't see the resemblance outside of the ski-masked killer. Boredom really seeps in when the filmmakers bring in a very predictable twist in the end, something to do with the ghosts of the past and Bruce Dern heatedly yelling that prayer will give our heroine courage. It's pretty confusing and somewhat frustrating, making me pray they never make a sequel to this.

Shout! Factory brings 'Toolbox Murders 2' to Blu-ray under the distributor's Scream Factory line. The Region A locked, BD25 disc is housed inside the normal blue case with a cardboard slipcover. At startup, the disc goes to a menu screen with full-motion clips while music plays in the background.

Coffin Baby opens his toolbox of horrors for Blu-ray with a good-looking but generally flat 1080p/AVC MPEG-4 encode. Obviously shot on digital HD cameras, the high-def picture comes with that unattractive sterile appearance which makes the movie seem cheap and amateur.

The photography is rather plain and lifeless, but it's highly detailed, with mostly average contrast levels, revealing every gruesome, disgusting feature inside the maniac's grimy basement and exposing every pore and minor blemish on the faces of actors. Blacks are also a bit middling but strong and consistent throughout with excellent shadow delineation. The palette is colorful and full of energy, giving every drop and puddle of blood a dramatic pop. The 1.78:1 image has nice depth to it, but in spite of its positives, the presentation is occasionally hindered by some mild aliasing, light banding and blooming in the highlights that tend to distract.

The masked psychopath grunts and mutters about thanks to a pair of generally pleasing DTS-HD MA soundtracks: the first in surround sound while the second in stereo. Comparatively speaking, listeners can't go wrong with either because the design seems fairly limited and focused to the front soundstage.

Imaging is broad with a strong presence and well-balanced channel separation, but this is only apparent when the music of Terry Huud plays in the background. Otherwise, much of the action is narrowed to the center of the screen, giving the vocals top priority. The 5.1 track employs the rears on occasion with some mild atmospherics, but it creates a convincing soundfield. Dynamic range is clean and detailed, for the most part, but it's also pretty plain and uniform. However, low bass provides a bit of oomph to the action and music to satisfying effect.

'Toolbox Murders 2' is supposed to be a sequel to Tobe Hooper's 2004 remake of 1978's grindhouse cult classic, but I don't see the resemblance outside of the ski-masked killer. In the end, the micro-budgeted production is terribly dull with a plot that fails to engage on all levels, placing more emphasis on gruesome, realistic special effects than on the story. The Blu-ray arrives with an average audio and video presentation that doesn't impress much either. Lacking bonus features, this bare-bones release won't likely attract anyone outside horror hounds and the curious.

Sale Price 19.22
Buy Now
3rd Party 16.5
In Stock.
See what people are saying about this story or others
See Comments in Forum
Previous Next
Pre-Orders
Tomorrow's latest releases