In the year 2017, a rich man travels to the ends of the earth to find that the perfect woman is always under his nose. When successful businessman Sam Treadwell finds that his android wife, Cherry model 2000 has blown a fuse, he hires sexy renegade tracker E. Johnson to find her exact duplicate. But as their journey to replace his perfect mate leads them into the treacherous and lawless region of The Zone, Treadwell learns the hard way that the perfect woman is made not of computer chips and diodes, but of real flesh and blood!

Growing up, we all had that one movie we watched repeatedly, over and over again, a feature we just couldn't get enough of and, for whatever reason, we thoroughly enjoyed. Or, at least, I hope others can share in that similar experience because otherwise, what I'm about admit is pretty darn embarrassing. I mean, come on, don't you have that one Disney movie you annoyed parents with because as soon as it was over, you wanted to watch again. And again. And again. Well, for me, there were three movies I loved watching repeatedly — though I was already in my teen years by this point, so that'll definitely add to the embarrassment — and they were 'The Ice Pirates,' 'Krull' and 'Cherry 2000.' When I finally had money of my own to spend, I remember buying VHS tapes of them so that I could enjoy them whenever I felt like it. The common denominator linking all three is that they are all hybrid genres, science-fiction at their core but mixed with conventions from other genres: one being pirates, the other heroic fantasy, and arguably best of all, the western.

There was something about 'Cherry 2000' that caught my imagination back then, though I couldn't really put my finger on it at the time, and there was also something in the fact that others didn't even know the movie existed. It was like my little secret, a hidden gem that only I knew how to appreciate and treasure. The rest of the world was missing out. It was originally meant as a headlining vehicle for Melanie Griffith, a fast-rising star who made waves as the madly spunky Lulu in 'Something Wild.' But after the production ended, the movie was continuously shelved for unknown reasons and finally made its premiere on VHS. One day, walking down the "New Releases" aisle of my local video store, I took a chance on the movie based entirely on the cover art. It stood out from the dozens of other options because it was bright and colorful, almost resembling the popsicles one would buy from the ice cream trucks. The title was a cool metallic gloss with a car hanging in the air, implying lots of action, and best of all, a beautiful red head rested in the center in sexy pose.

For any a hormonal teenager, this was plenty to convince a rental, if not a purchase. And now that I think back on it, I see the primary attraction I had to the movie. It wasn't so much Griffith herself although she does a terrific job and I would argue it's one of her more memorable performances. It's the character she plays — a rugged, resourceful loner simply known as E. As if taking fashion advice from Hans Solo, Indiana Jones and John Wayne movies, she comes off headstrong and sassy with a coldly tough exterior, quick on her feet and smart. Apparently, in the future, women are still viewed as inferior to men, not really fit for the dangerous career as tracker, an individual hired for retrieving valued items from the post-apocalyptic wastelands known as "Zone 7." Sam Treadwell (David Andrews) makes that mistake when initially seeking her services, but she soon convinces him there's no one better for the job. Later, we find out her real name is Edith Johnson, and at the same time, we discover there's a gushy, softer side to this resilient and feisty woman. 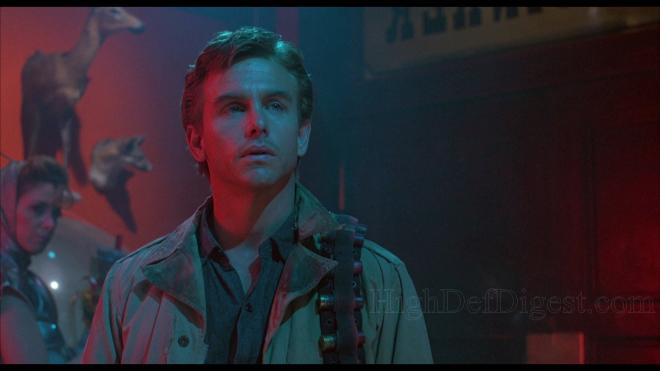 Griffith does an excellent job of making E. sexy and attractive, giving us little hints of her feminine side masked beneath all that hard-bitten lawlessness. We gather a sense of loneliness and sadness behind those vivid, crystal-blue eyes, which pop all the more because of her cherry-red hair, and are reminded of an actual living person with human emotions whenever Griffith flashes that cute little smirk of hers. And this is crucial in a story about a dystopian, hypersexualized future where people no longer meet and flirt at a bar in the traditional manner. In order to pick up someone, a lawyer, such as Laurence Fishburne's very brief cameo, must be brought in, arrangements negotiated and contracts signed. It's no wonder then some, like lonely-hearts Sam, find a relationship with female androids more gratifying. But even here, there's something troubling about a synthetic being specially designed for pleasing the particular expectations of men, such as Sam wanting a strictly domesticated woman. Though he treats the machine with respect, she's made to be at his beck and call.

From a script by Michael Almereyda ('Nadja,' 'Hamlet (2000),' 'Cymbeline') and Lloyd Fonvielle ('The Mummy'), Griffith's E. defies this new future where relationships and human contact are depressingly limited. Not only is she not an obedient machine or seeking contractual promises, but she's also not the submissive domesticated type like Ginger (Cameron Milzer), dutiful wife to wasteland's deranged overlord Lester (the awesome Tim Thomerson of 'Trancers' and 'Dollman' fame). True to western themes, E. is the uncompromising, hard-nosed individual free from the stifling restraints and expectations of so-called modern civilization, and Griffith makes her damn sexy. Over twenty-five years later, 'Cherry 2000' still manages to entertain and keep me engaged, and for a while, I wondered of my attraction to it. It's Griffith's portrayal of the tough-as-nails heroine, and director Steve De Jarnatt ('Miracle Mile') is excellent in the director's chair, perfectly balancing the action with subtle feminist undertones.

Kino Lorber brings 'Cherry 2000' to Blu-ray on a Region A locked, BD25 disc inside the standard blue keepcase. At startup, viewers are taken directly to a static main menu with music.

The search for love takes a sharp turn in the right direction on Blu-ray with an excellent 1080p/AVC MPEG-4 encode. From the looks of it, the high-def transfer was made from a fresh remaster of the best available elements. Every once in a while, the picture comes with a very light spatter of white specks and dirt, and a couple scenes don't exactly look their finest. However, this is easiest the best the movie has ever looked.

Presented in its original 1.85:1 aspect ratio, contrast is mostly spot-on and comfortably bright, allowing for excellent visibility into the far distance. To be fair, highlights can come off a tad strong in a couple spots, but they're not too terrible or distracting. Fine lines and objects are detailed throughout with a few moments looking better than others. Dirt and smudge is plainly visible, and the tiniest rock on the road is distinct. Facial complexions are very revealing, showing every wrinkle and negligible blemish in the faces of actors. Black levels are true and accurate with great delineation within the darkest portions, and the image is awash with a thin layer of natural grain, giving it a nice cinematic appeal. Colors are richly saturated and true to life, making the entire presentation seem energetic and rejuvenated while skin tones appear natural.

The sci-fi cult favorite finds a home on Blu-ray with a great and enjoyable DTS-HD Master Audio stereo soundtrack. The soundstage is wide and welcoming with plenty of convincing off-screen activity and movement between the channels. The music of Basil Poledouris benefits the most from the upgrade, taking full advantage of the extra breathing room and creating an amusing wall of sound. Background effects are, for the most part, discrete and detailed while the low-end delivers palpable depth and weight to a few scenes and the score. Dialogue is clear and intelligible amid all the mayhem and gunfire, but occasionally, vocals can seem a bit canned and detached.

On the negative side, the mid-range can fail during action sequences, revealing some minor noise and distortion in the higher frequencies. Sounding a tad bright and ear-piercing, details can be lost in the most chaotic moments, which is unfortunate, but overall, the lossless mix is appreciable and makes for a nice complement to the video.

'Cherry 2000' is largely loved for its fond memories, but there is actually a smart plot at its core, combining science-fiction and western genres with themes on the future of consumerism and human relationships. Starring Melanie Griffith, the movie still manages to entertain with plenty of fun, cheap action and a clever story. The Blu-ray arrives with excellent video and a very good audio presentation, but the supplements are sadly puny. Nevertheless, fans should be very happy with the overall package and will want to add this cult favorite to their collection.

Sale Price 14.99
List Price 29.95
Buy Now
3rd Party 59.99
In Stock.
See what people are saying about this story or others
See Comments in Forum
Previous Next
Pre-Orders
Tomorrow's latest releases