When a US intelligence agent (Anthony Quinn) is unable to bring a ruthless drug baron (James Mason) to justice, he resorts to hiring a contract killer. But the man he is put in contact with (Michael Caine) turns out to be an old friend.

International intrigue is often a fantastic setup for a great thriller. For one thing, having the story take place in exotic locations puts the suspense and thrills on a world stage and allows the audience to experience a part of the world they otherwise wouldn't - that's part of the reason the James Bond franchise does so well. Also, by setting the action in another part of the world, the stakes seem to carry more weight, even when it's a personal story of vengeance, seeing the beautiful locations throughout France somehow makes the action seem that much more important. 1974's 'The Destructors,' also known as 'The Marseille Contract,' is just that sort of thriller about a DEA agent resorting to extreme means to bring down a crime kingpin.

For DEA agent Steve Ventura (Anthony Quinn), his Paris assignment hasn't exactly been everything he'd hoped and dreamed for. After attempting to take on a local drug boss Jacques Brizard (James Mason) without any evidence, Steve has been put behind a desk at the request of the French government. Bored with his current life, things aren't entirely terrible as Steve has taken to sleeping with his partner's wife whenever he's out of town. After his partner is crushed to death by a car driven by Brizard's head goon Calmet (Marcel Bozzuffi), Steve is determined to see that justice is done once and for all, if for not for his partner's family then he's going to do it for himself.

Given that Brizard is extremely wealthy and has accrued massive amounts of power, he's also a major thorn in the side of French police, in particular, the side of Inspector Briac (Maurice Ronet). As Steve and Briac face their situation, Briac proposes an unorthodox alternative, hire a contractor, someone without compunction towards killing someone for cash. Briac knows of a contractor in the area that will take any job, so long as his price is met. Thankfully given the nature of Steve's work, he has an undisclosed expense account that intended for unexpected events. However, encountering an old war buddy by the name of John Deray (Michael Caine) as his hired gun was the last thing Steve ever expected to happen.

With John paid and ready to take on the contract, all Steve has to do is sit back and wait for the newspaper headlines to come rolling in. The only problem with this scenario is Steve begins to have a crisis of conscience. When a witness comes forward and is ready to testify against Brizard, Steve has a thin chance to take down Brizard the right way, only it may be too late to stop the contract. John is a professional, and when he's been paid he sees the job through to the end. The bitter end, if necessary. 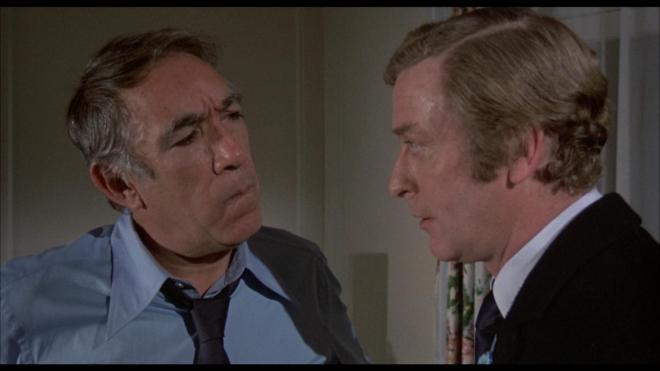 Written and directed by Judd Bernard, 'The Destructors' is a solid piece of early 70s action thrills, but given that it was released three years after 'The French Connection,' the film feels a little late to the party. Don't get me wrong, this is a solid little thriller featuring an all-star cast, but at the same time what is at stake feels very familiar. A French drug kingpin is about to import a massive amount of drugs and he runs into some rough and tough American justice. Where this movie gets things right is the law enforcement officer hiring a contract killer to finish the job he can't.

Watching Michael Caine and Anthony Quinn work together is a sight to see. Both men play characters who are lethal in their respective trades, they just happen to be on opposite sides of the law. Quinn's Steve is ready and willing to let someone else deal with his problems, but he has a hard time facing the responsibility of putting a friend in the line of fire. The dynamic works and offers the right amount of tension to the situation. Michael Caine is pouring on all of the charm as a gentleman hitman - almost as if this film was intended to serve as an audition tape for the James Bond franchise. He's suave, cool, and adept at killing as the film's several action sequences showcase.

Where the film falters is in its pacing. At just 89 minutes, 'The Destructors' moves incredibly fast. While this isn't too much of a problem as each character is given just enough setup to be believable, I do wish the film had hit the brakes a little bit. This is one of those movies that could have used just a bit of extra time, maybe a half an hour's worth, to help set up the stakes just a bit better. This movie barrels along at a great clip, but it would have been nice to take a moment to breathe a little. To that effect, we never really get to know James Mason's Brizard all that well. We're told he's bad because of the industry he works in but at the same time, we never really see him do terrible deeds. As a bad guy, he's more gentlemanly 'Desert Fox' than anything truly menacing like he played in 'North By Northwest' or '20,000 Leagues Under The Sea.'

At the end of the day, I do wish the film hadn't been retitled 'The Destructors' instead of the original title of 'The Marseille Contract.' 'The Destructors' sounds more like a Lee Marvin World War II action flick than a piece of slick international intrigue. It's also odd that both titles are featured on the film's title card! Either way you slice it, the movie is fun. I was entertained from start to finish and I never felt like I was ahead of the plot. Give it a shot, it's worth the time and is a fine showcase for some great talent.

'The Destructors' makes its way to Blu-ray thanks to Kino Lorber and their Studio Classics line. Pressed on a Region A locked BD25 disc, the disc comes housed in a standard case with reversible artwork and opens directly to the main menu.

Sporting a fresh HD remaster, 'The Destructors' makes for a pretty fantastic transition to Blu-ray with its 1.85:1 1080p transfer. With fine film grain retained, the image offers up healthy detail levels that really shine in close-ups and middle shots. Some long range shots can look a little soft in places, but that could also be a photographic artifact rather than a transfer issue. To that effect, facial features and the French location architecture look fantastic in high definition. Black levels are inky and solid offering a wonderful sense of depth and three-dimensional pop. Colors are cool, but that fits the tone of the film as greens are a little richer, a little darker and blues look a little more icy. Flesh tones are nice and even and the cast looks accurately healthy. Other than a couple of blink and you'll miss them stains, the print is in pretty flawless shape leading to a very pleasing Blu-ray appearance. Aside from some occasional and slight contrast blooms, there is little if anything to fault this transfer for.

With a strong English DTS-HD MA 2.0 audio track, 'The Destructors' comes through with near perfect auditory clarity. Dialogue comes through crystal clear keeping fairly front and center given the stereo limitations. To that effect, imaging is fairly strong as there is just enough natural sounding channel movement with dialogue and the film's ambient sound effects. Levels are well balanced allowing for an even presentation without any distracting volume changes. Dialogue, sound effects and the awesome score from Roy Budd of 'Get Carter' fame have plenty of space to occupy. Free of any age-related issues, hiss, pop, or dropouts, this is a pretty fantastic audio track.

The Destructors Trailer: (HD 2:51) An interesting trailer that does a decent enough job of selling the movie but also makes it look a tad silly.

The Billion Dollar Brain Trailer: (HD 2:51) A good trailer for a fun movie.

'The Destructors' is an entertaining and fun little piece of espionage and intrigue. With a great cast of classy leading men and a compelling story, I found this little flick to be a delight from start to finish. It may not be the most original piece of work out there, but it is absolutely worth the time. Sporting a top-notch A/V presentation, the only thing I can fault this Blu-ray release from Kino Lorber is for the paltry selection of extra features. Even still, the movie itself it worth the time and I'm glad to see a deep catalogue release like this one make its HD debut. Easily recommended.

Sale Price 109
Buy Now
3rd Party 114.95
In Stock.
See what people are saying about this story or others
See Comments in Forum
Previous Next
Pre-Orders
Tomorrow's latest releases