The People Under the Stairs: Collector's Edition

Wes Craven, the director of The Serpent and the Rainbow and Shocker, locks you inside the most terrifying house on the street. Trapped inside a fortified home owned by a mysterious couple, a young boy is suddenly thrust into a nightmare. The boy quickly learns the true nature of the house's homicidal inhabitants and the secret creatures hidden deep within the house.

Every time I sit to watch Wes Craven's 'The People under the Stairs' — the last time was almost a year ago when Universal first released the movie on Blu-ray — it feels more like revisiting a dear old friend, spending the entire time reminiscing on the past rather than catching up on what each has been doing since. I distinctly remember the Friday night driving with a couple friends to the theater, the exact same place where two years earlier I also paid to see Craven's 'Shocker,' and we were surprised by the movie's weird sense of humor and lack of scares. We weren't so much disappointed as a little confused by the story of a disturbed white suburban couple who imprison their children in the basement if they misbehave like most teenage boys are likely to do. We didn't walk away complaining either because the movie was and still is, entertaining. We just weren't sure what to make of it, and even today, I'm still not quite certain because it weirdly blurs the line between comedy and horror.

Essentially, the movie is all over the place in terms of scares and humor, building the suspense and making audiences jump out their seats one minute but then making them laugh with a puzzled look the next because of some completely off the wall surprise or comment. Then again, none of what is seen in the movie should come as much of a surprise since the presumed married couple, the Robesons (Everett McGill and Wendy Robie), are repeatedly shown as a deranged pair with a house protected with booby traps and contraptions for detaining unwelcomed guests. And this is precisely what happens to over-confident burglar Leroy (Ving Rhames) and his amateur, 13-year-old apprentice Poindexter (Brandon Adams), nicknamed "Fool." When they break in and explore the large Craftsman-style home, Fool discovers people live in the dank darkness of the basement, someone is crawling in the walls, a young lonely girl (A. J. Langer) lives in fear and once you're inside, there's no way out.

The plot, sort of, kind-of, plays out like a freakishly twisted horror version of 'The Goonies.' Or, at least, that's how it feels every time I watch it. And the similarities are there: Leroy and Fool are on the hunt for a hidden treasure beneath the house — gold coins that funnily look like the doubloons from the Spielberg-Columbus-Donner classic — and Fool's family being evicted from their apartment is also what spurs this adventure into the dark side of suburbia. Of course, the major difference between them is the gore, an endless air of creepiness thanks to the talents of Craven and cinematographer Sandi Sissel, and the perverse levels of violence. Oh, also, the movie is just downright weird — in a good way. One of the more memorable and arguably most bizarre moments is when the husband, often called Daddy, jumps up out of nowhere sporting a bondage suit and a shotgun. I remember bursting out laughing when the movie and story made a sudden right turn into the land of bonkers in that instance. 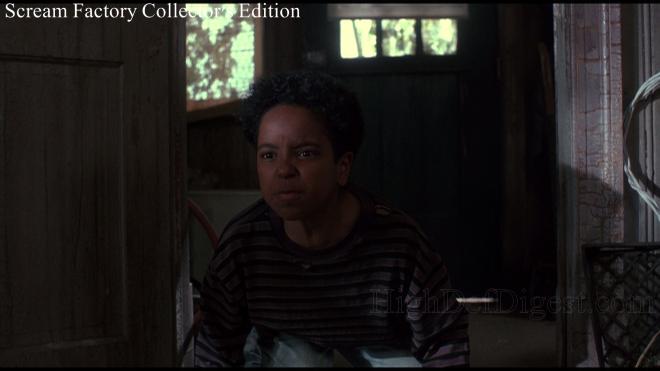 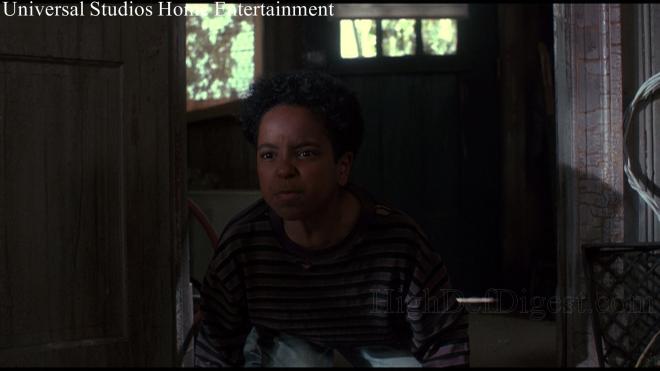 Leading up to that moment was an intentionally patient, steady pace of spookiness and tension as Fool desperately tried to find a way out the house. He ended up needing the help of Alice (Langer), the aforementioned scared little girl, and her tongue-less friend Roach (Sean Whalen), the thing crawling inside the walls. After the two of them provide some needed exposition that makes clear the Robesons are some very sick people, the gimp suit scene deliberately goes over the top to lighten things up a bit with silliness but also shows just how vile and revolting the couple truly is. Hey, nothing wrong with married couples exploring the wilder side of their sexual fantasies, but in this instance, these people are just gross, especially when we later find out the two share a very close relationship. It also becomes clear the woman, referred to as Mommy, plays the dominant, older one and Daddy is the submissive. And grosser still, the pair have acquired the unique appetite for human flesh.

'The People under the Stairs' is just so off-the-wall and bizarre, you have to learn to love and accept it for what it is — it's kooky, it's wacky, but also lots of fun. And the script, which Wes Craven wrote himself, is not just 100-minutes of weirdness. It's also a clever and astute little campfire fable that spoke to the issues of the period, namely that of the disenfranchised lower classes and the demoralizing of inner-city urban youth. Craven injected a bit of social commentary beneath that veil of grotesque oddities and absurdities, showing the Robesons as cruel, vicious landlords that cared more for wealth than human life. Their cannibalism is symbolic of their apathy and their appetite to succeed on the labor of others. For Fool, the story is also a coming-of-age tale hinted at in the opening credit sequence with his sister (Kelly Jo Minter), where he is about to open his eyes to the cruel realities of the world. This Craven cult favorite continues to entertain, delivering the laughs along with the creeps and smarts.

Shout! Factory calls forth 'The People under the Stairs' to Blu-ray as a Collector's Edition under the distributor's Scream Factory line. The Region A locked, BD50 disc is housed inside the normal blue case with brand new reversible cover art and a cardboard slipcover. At startup, the disc goes to a menu screen with full-motion clips while music plays in the background. 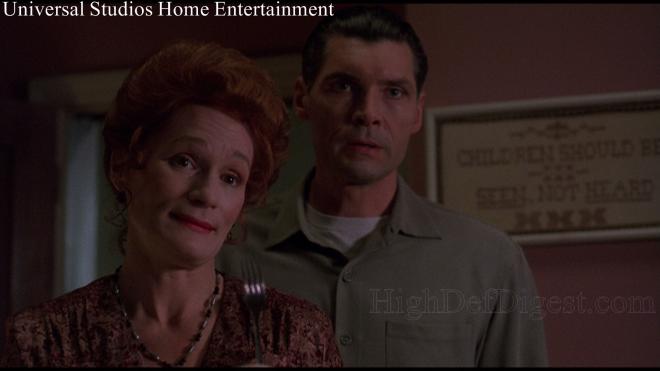 This latest release of Wes Craven's cult favorite from Scream Factory marks the second time the ghoulish people under the stairs escaped their basement captivity in less than a year. And from the looks of their ghastly faces, they didn't bother with improving their appearance. In fact, side to side comparisons reveal Shout simply repurposed the same 1080p/AVC MPEG-4 encode for this "Special Collector's Edition," which is not an entirely bad thing since the picture quality is quite satisfying, all things considered. The movie has never been much of a looker to begin with, so the fact they didn't tamper or tweak the transfer further can be seen a plus.

Presented in its original 1.85:1 aspect ratio, the image is nicely detailed with excellent definition around trees and the landlord's house in daylight exterior shots. When inside the creepy house of madness, we can clearly make out the lines and grain in the wood, see every blemish and imperfection along the walls, and perceive the tiniest antique object in the background. Facial complexions also appear natural and revealing, exposing every pore and wrinkle in the cast while also allowing fans to appreciate the awesome makeup work of both the basement dwellers and the Woman's scary paint job on her face. So, it goes without saying that the color palette is richly saturated and energetic, making the movie seem fresh and rejuvenated after hiding for so long from the glorious sunshine of high-definition video. Contrast is also well-balanced and comfortably bright with clean, crisp whites throughout, and black levels are strong with excellent visibility of the shadow details. 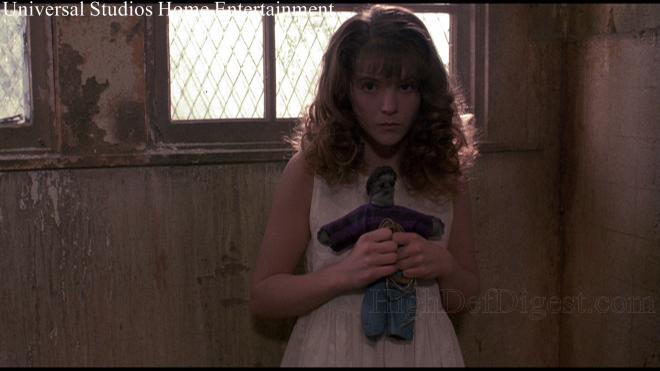 Keeping to Shout/Scream rituals, the goofy horror flick jumps onto Blu-ray with two listening options: a new-fangled 5.1 surround soundtrack and the same 2.0 stereo soundtrack from last year's Universal release. Not surprisingly, I found myself favoring and preferring the latter over the new fancy upgrade. That's not to suggest there's anything particularly wrong with the former, though certain moments do feel as if sound effects are forcefully stretched and thinned. It ultimately comes down to personal preference of hearing the movie as close as possible to its original design, and the movie was originally recorded in stereo and frankly, offers a more satisfying listening experience.

But in either case, or whatever the viewer's own preference, the audio won't likely disappoint in the least. Imaging feels broad and welcoming with great distinct clarity and separation across the three front channels. Off-screen effects and atmospherics are amusingly convincing, creating an appreciable sense of space and presence, especially during outdoor scenes with city traffic and chirping birds or scenes in the basement with the grunts and whispers of the disobedient boys. Dynamic range is sharp and detailed throughout with excellent extension and movement between the highs and mids, allowing every high-pitched scream, every passionate yell and every gunshot to be heard without a hint of distortion. The score of Don Peake and Graeme Revell benefits the most from the upgrade to lossless, delivering a broader and warmer soundstage with a nice punchy bass that provides some welcomed depth. Amid all this, dialogue remains clear and well-prioritized so that fans never miss on the back and forth squabbles of Mommy and Daddy. 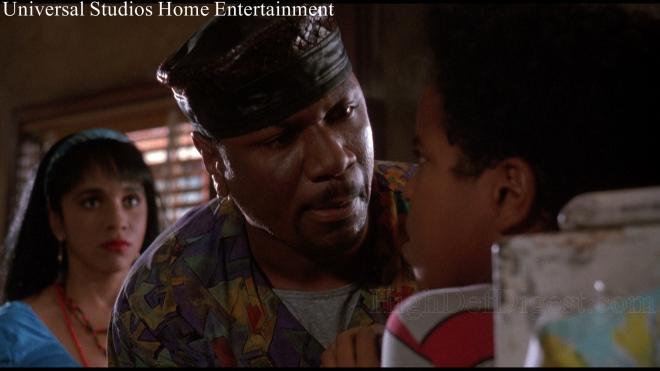 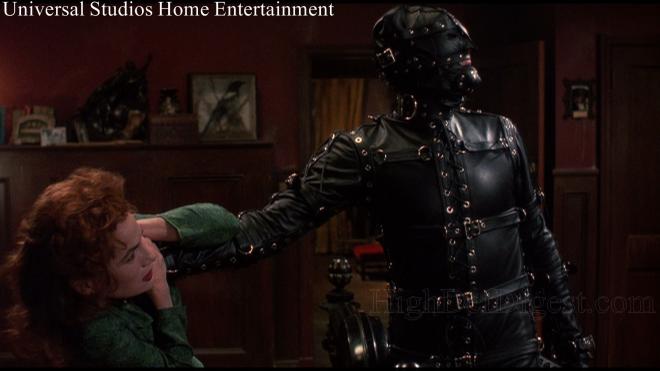 'The People under the Stairs' is an off-the-wall and bizarre horror flick, full of weird, twisted humor and a few creepy moments — it's kooky, it's wacky but also lots of fun. From Wes Craven, the movie is memorable precisely because it's a madcap adventure into a demented house that reveals the dark, ugly side of suburbia. The Blu-ray from Scream Factory arrives with a very satisfying audio and video presentation. With a nice assortment of supplements to boot, the overall package makes for a great addition to the cult collection.

Sale Price 17.77
Buy Now
3rd Party 13
In Stock.
See what people are saying about this story or others
See Comments in Forum
Previous Next
Pre-Orders
Tomorrow's latest releases