Season 3 picks up a month after the Season 2 finale, when Carrie's father, gang kingpin Rabbit (Ben Cross), finally met his demise after a climactic church shootout. Carrie, now exposed and estranged from her husband and kids, remains in Banshee, working as a waitress by day while moonlighting with Lucas, Sugar Bates (Frankie Faison) and Job (Hoon Lee) on a variety of local heists. As Lucas finds it harder and harder to keep his true identity from his deputies – especially Siobhan Kelly (Trieste Kelly Dunn), now his romantic interest – he and the Banshee police force become embroiled in a new conflict between Amish gangster Kai Proctor (Ulrich Thomsen) and Chayton Littlestone (Geno Segers), the vicious, vengeance-minded leader of the Redbone wing of the Kinaho tribe. And as fists and bullets fly in and around Banshee, Lucas concocts a new scheme that could net his thieves a fortune – by robbing a decommissioned Marine compound housing millions of dollars.

There comes a certain point in a television show's run where it just stops trying to attract new viewers and instead focuses on satisfying the audience that it has got. Some shows arrive at this point at different places in their run, but the tell-tale trademarks are the same, the characters are established and the plot beats hinge on events from previous seasons. For Cinemax's crime drama action adventure series 'Banshee,' that point was apparently its third season. If you've been keeping up with the show, this season is on cruise control and should satisfy fans. If you're new to the show, you're going to have a tough time getting caught up or understanding current events.

Life, in Banshee Pennsylvania, is going about as well as can be expected. That is of course when you consider that the town's Sheriff Lucas Hood (Antony Starr) is in fact, a wanted criminal. Not even his new girlfriend deputy Siobhan Kelly (Trieste Kelly Dunn) knows Hood's deep dark secret, but his partners in crime Sugar (Frankie Faison) and Job (Hoon Lee) do. Together they're plotting to rob a Military contraband depot of millions in confiscated cash. But as any good plan is about to unfold, problems arise. When Hood isn't trying to forge a relationship with his estranged daughter Deva (Ryann Shane), he's also trying to keep his former lover Carrie (Ivana Milicevic) out of trouble.

On top of Sheriff Hood's domestic issues, he's got a whole mess of trouble coming at him in an official capacity. On top of his long-brewing feud with Kai Proctor (Ulrich Thomsen) and his sultry niece Rebecca (Lili Simmons), a tribal war is brewing on the reservation. with Chayton Littlestone (Geno Segers) now in charge of the Red Bones, Banshee is going to see a lot of action. When the Red Bones and Proctor collide, innocent people get caught in the crossfire and the Feds are brought in to deal with the mess. If having a former Amish turned criminal and a Native American calling for a tribal war wasn't enough, having the Feds in town is enough to ruin Hood's plans for the perfect retirement score.

If a lot of this plot of 'Banshee: The Complete Third Season' sounds confusing or tough to get a handle of, it's because it's built upon two prior years of plot twists and turns. While this season does offer up some brief flashback moments to help those newcomers get caught up, unless you've actually seen the episode in question you're likely going to be lost by the plot. If you've stayed consistent with this show, pretty much everything on display should sound familiar and fit right at home - for better or worse. 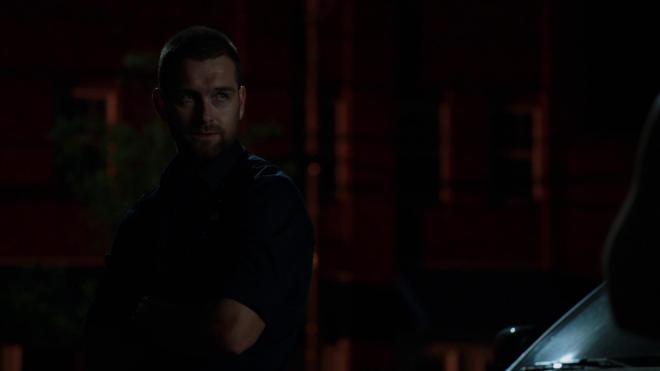 'Banshee' was recommended to me because I was such a big fan of 'Justified.' So, I have given this show a shot, slowly working through the first two seasons because I wanted to find something that was as raw and as much fun as the average episode of 'Justified' was. 'Banshee' is a show that is fun, but it doesn't hold a candle to 'Justified.' 'Banshee' is one of those shows that after awhile it starts to just give way to one cartoonish notion after another. When you start to factor in all of the criminal interests and all of the different motivations of the various characters, it's difficult to believe that one town could house this much drama. From an Amish gangster to Native American warriors to white supremacists, that is a pretty busy town, to say the least.

Taken as a whole, 'Banshee: The Complete Third Season' is still a good bit of entertainment. The rivalry between Hood and Procter simmers at the right point for most of the season. Lili Simmons' Rebecca has settled nicely into the sexy femme fatale role making her a lethal presence - especially after the events of season two. The real standout of this season is Geno Segers as Chayton Littlestone. It's a pretty silly role if you break it down, a tribal tattoo sporting Native American warrior, but the menace he brings the role makes him a fearsome villain. The fifth episode, in particular, is a great example of this as the show aims to recreate its own version of John Carpenter's 'Assault on Precinct 13.' Like I said before if you've stuck with the show this long, Season Three delivers. If you're new to the show, this is a difficult season to recommend as a starting point.

'Banshee: The Complete Third Season' arrives on Blu-ray thanks to HBO Home Video. Pressed onto four Region A locked BD50 discs, the discs are housed in a four-disc Blu-ray case with slip cover. Also included in the set is a Digital HD voucher slip. Each disc opens to an animated main menu featuring standard navigation options.

'Banshee: The Complete Third Season' is given a very strong 1.78:1 1080p presentation. The series has always had a nice film-like quality to it and this season is no exception to the established rule. Detail levels are strong and offer an incredibly look at fine facial features, costuming, and detail levels. Black levels are deep and inky allowing the film to maintain a notable three-dimensional pop to it. Colors are also bright and vibrant allowing greens and browns to keep primaries in check without impacting flesh tones. Red is especially an important color given the look of the tribal warriors. Some of the darker sequences I noticed could look a bit noisy, this was especially true during the fifth episode as most of the action takes place in near total darkness. That episode also had a little bit more noticeable instances of crush. Other than those slight and sparse anomalies, this is a pretty fantastic looking presentation.

For a show like 'Banshee,' action is the name of the game and this series' DTS-HD MA 5.1 master audio tracks have their work cut out for them. From the first episode to the last of the season, there are tons of gunfights, fist fights, and shouting matches that give the audio mixes quite the workout. Dialogue keeps to the front/center channels and is clear and easy to hear throughout. The rest of the track for each episode is usually made up of the film's score and background ambients to give most scenes a sense of space and atmosphere. Imaging is strong through each episode as there is plenty of channel movement and levels are set just right so you won't need to accommodate spikes in the action. All around this is a pretty fantastic mix for each episode and really works well to maintain the nature of the show.

Banshee Origins: (HD 24:25) If you need to get caught up on the story, these 8 little backstory features should help get you up to speed. This helps, but just so much and if you really want to understand everything you should probably start with season one and work your way up.

Banshee Origins Saga: (HD 54:33) This is all around a great little bit of extra material that helps expand a lot of the show. Also includes a commentary track with Executive Producer and Director Greg Yaltanes with Marshall Palmer.

Zoomed In: (3:41) This is some very brief behind the scenes material covering the events of the first two episodes.

Making of Episode 2 Title Sequence: (HD 1:49) This is a brief but cool extra feature.

Burton VS Nola Stunts: (HD 3:49) A closer look at some of the fight work that went into this scene.

Burton VS Nola Camera Movement: (HD 00:53) A Short but very cool extra feature looking at how the fight sequence was conceived.

The Heist: (HD 20:10) This was a great part of the season and this is a very impressive making of feature that covers a lot of the ins and outs of shooting the scene.

Deleted Scenes: (HD 5:!1) Some decent material here but you can see why they were cut as they just don't add much of anything extraordinary.

Zoomed In: (HD 6:51) More EPK material covering the three episodes on this disc. Some decent material but nothing earth shattering.

Audio Commentary: Episode 10 is covered well by director Jonathan Tropper, Loni Peristere, and Adam Targum. This is pretty good because it covers the various aspects of where this season leaves off and how it sets up for what is to be the fourth and final season.

Genoa Rehearsal: (HD 4:50) A solid behind the scenes feature.

Episode 10 Zoomed In: (HD 2:22) Still very brief, but it is singularly focused on the one episode so it covers a little more material.

'Banshee: The Complete Third Season' is a show that is best described as an action crime cartoon. It shouldn't be taken seriously. That said, folks interested in starting into this penultimate season would do well by going back to the first two seasons before trying to dig into this one. There really isn't any wiggle room for newcomers here. HBO Home Video has done an excellent job bringing this season to Blu-ray featuring a fantastic A/V presentation, as well as a whole host of informative extra features. Fans of the show should feel secure in a purchase, but others who don't already know the series should start at season one. Recommended.

Sale Price 69.99
Buy Now
3rd Party 49.72
In Stock.
See what people are saying about this story or others
See Comments in Forum
Previous Next
Pre-Orders
Tomorrow's latest releases