Cinemax's first scripted primetime drama series returns. A high-octane, globe-spanning thriller, Strike Back focuses on two members of Section 20, a secret British anti-terrorist organization: Michael Stonebridge (Philip Winchester), a consummate British soldier still struggling to overcome tragedy in his life, and Damien Scott (Sullivan Stapleton), a disgraced U.S. Delta Force operative who has found redemption with S-20. In Season 3, the series will have a true global canvas, opening in Colombia - with parallel missions in Beirut, Budapest, Russia, and Germany - and following a trail of drug money that is funding terrorists in the Middle East.

"…and you don't know me. In 10 seconds I'm going to redecorate this vault with 50 shades of grey matter!"

Sometimes, you just have to turn your brain off and let a show be a show without second guessing plot points, character motivations, or logistics. Depending on the particular program you're intent on investing your time in, you could cause yourself some serious damage. Some shows are just meant to be good dumb fun. "Strike Back" is basically like watching someone play "Counter Strike" for sixty minutes. It's fun for a time, but after awhile you want to see the simple plot move forward in a decent and meaningful way.

Ultra macho Section 20 point men Sgt. Michael Stonebridge (Phillip Winchester) and Sgt. Damien Scott (Sullivan Stapleton) have earned some well-deserved time off after preventing nuclear armageddon in the previous season. They're riding their motorcycles from Alaska to Baja where they plan on slamming tequila shots and probably having more than a few meaningless sexual encounters with some of the local ladies. As they rack up some solid road fines, their vacation is cut short as they're called back into active duty.

Recently appointed Section 20 head Maj. Rachel Dalton (Rhona Mitra) has more than a few problems on her hands. After witnessing the brutal execution of one of her colleges (name redacted for spoilers) at the hands of terrorist frontman Leo Kamali (Zubin Varla), Dalton has uncovered a plot that involves Columbian drug cartels and the funding of terror attacks in the Middle East lead by the elusive Al-Zuhari. On top of potentially having to save the world yet again, Dalton and the rest of Section 20 have a new chief, Lt. Colonel Phillip Locke (Robson Green) watching over all of their activities. While a responsible task master who is willing to let his team do their jobs, Locke isn't afraid to get his boots dirty and personally oversee operations.

As the team locates and hunts down Kamali, they learn of a larger plot at work involving the release of a catastrophic virus that may not have a cure that draws in the Central Intelligence Agency as well as undercover Israeli Mossad agent Rebecca (Lyne Renee) who rekindles her romance with Scott, potentially putting the mission at risk. With three different intelligence agencies going after the same target, things are bound to get a bit messy - even when the fate of the entire world hangs in the balance. 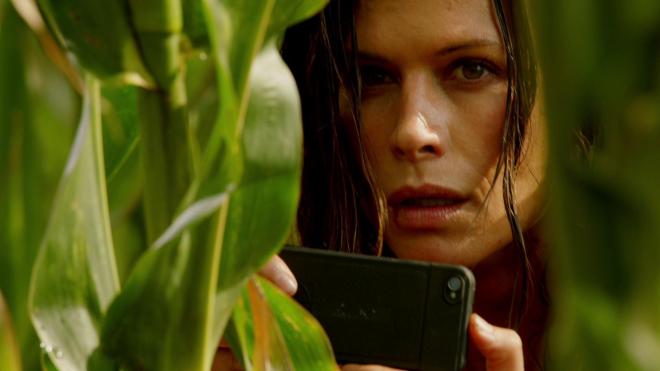 'Strike Back' is one of those shows that is easily summed up in the opening credits animation: "guns, guns, tough guys, guns, breasts, guns, explosions, tough guys, guns, sex, guns, explosions." That isn't to say that is a bad thing because this show proves to be infectiously entertaining. It's probably not the best show, but it is a good deal of fun - which is all that it needs to be. Before digging into this season, I was in the process of playing catch up since I was relatively new to the show. Having only made it into the first couple episodes of Season 2, I will say that Season 3 turns out to be a great season to jump into if you've never seen a single episode of the show. The season starts swiftly and you may wonder who some of these characters are and their relationship to one another, but thankfully they offer up just enough back story and exposition moments for any newcomer to the program to get caught up pretty quickly.

As far as Season 3 of 'Strike Back' goes - it's pretty good. It offers up some solid entertainment with a decent enough story to push things along. New characters like Zubin Varla's Kamali and Robson Green (of Grantchester fame) as Locke go a long way to spicing things up a bit beyond being a run-of-the-mill action show. The biggest problem I have with this season, and it's something that's been hit on throughout the show's run is the issue of character motivation. Saving the world doesn't seem to be enough for these characters who are bound by duty to do a relatively thankless job so there is a constant need to keep putting people in the refrigerator. I won't say who dies, but it gets a bit tiresome to see a character that was already committed to the mission become extra super duper committed to the mission and killing the bad guy they were already going to kill anyway. While I look forward to Season 4 - especially after how this season leaves things - I really hope they come up with a more convincing and urgent means to motivate characters, rather than randomly killing someone.

At the end of the day, Season 3 of 'Strike Back' is a solid entry to the series and proves that Cinemax's first scripted drama has some legs to it. I don't know how much longer this show can keep going, but as long as the missions are wrapped up by the end of the season I'll be happy. Without an overarching story thread, the show finds ways to feel fresh and new which really goes a long way towards maintaining the fun. If you've never seen this show or the previous British edition, this is a great place to jump into.

'Strike Back' Season 3 arrives on Blu-ray from HBO housed in a sturdy traditional three-disc case with slip cover. All three discs are Region Free BD50s and come with a Digital HD voucher card.

Like other HBO produced shows, the third season of 'Strike Back' is a beauty. Free of any compression artifacts like banding or ringing, detail is intensely strong - whether the scene is shot at night or under the hot Columbian sun. Black levels and shadows are incredibly strong helping create a nice sense of three-dimensional depth. That said, during some of the night shots there is a fair bit of crush to knock this one back for. It isn't exactly terrible, but because the show looks so amazing the rest of the time, the crush sticks out like a sore thumb. Colors and flesh tones are wonderful and feel natural to any given scene's location whether that be in Columbia, Germany, Beirut, or Russia. All around this is a very pleasing transfer that should make fans happy.

When you have a show involving military stealth incursions behind enemy lines, you expect some balance between the tension-building silence and the bombastic explosions and gunfire. Thankfully the DTS-HD MA 5.1 tracks for all ten episodes never fail to deliver the goods. From exposition scenes to shouts of commands over gunfire, the dialogue is always crisp and clean and you never have any trouble hearing what needs to be said. Levels are strong as a rock as the tracks, for the most part, keep to the midranges, but low tonal notes are nicely present and push a lot of power out of the surround channels. Atmospherics are always present and welcome - especially as the team attempts to pull off sneakier missions that require silence. Imaging is also pitch-perfect and provides a lot of fun when the bullets start flying and zip past your ears.

Audio Commentaries: Episodes 1, 3 and 9 are given cast and crew commentaries. As a whole these are a good bit of fun, especially the cast commentaries because they offer a lot of perspective of what it was like training for the action sequences as well as maintaining the dramatic character moments. Director Michael J. Bassett is present for all three tracks and does a solid job of engaging the actors who join him probing for details from their points of view while also offering his own insights. I wish all ten episodes got commentaries, but these three are worthwhile listens.

9 How To Strike Back Featurettes: (HD approx 22:00) How To Act In Shit, How To Have Fun In A Drug Den, How To Get Yourself Arrested, How to Get Beat To Hell In Columbia, How To Drive Through A Minefield, How To Get Your Boss Kidnapped, How To Interrogate While Driving, How To Dangle From A Helicopter, and How To Fight Naked While On Fire. These short bits are just fun behind the scenes moments. They're almost too short making the individual selection of each featurette feel a bit redundant, but at the same time they're worth the watch - if only once.

Three seasons in and 'Strike Back' is still a show that proves it's okay to be good dumb fun. Similar to 'The Last Ship' (and not because it also stars Rhona Mitra), it's a show to sit back, turn your brain off and let yourself be entertained. The characters are bright and fun, the plots are appropriately compelling and completely ludicrous, and the action is sharp and intense. Season 3 is also probably the most accessible for newcomers, so if you've yet to give 'Strike Back' a try, this is a great place to start. With a solid A/V presentation, my only real complaint is that the extra features are a bit slim. Otherwise, this is an easily recommended set.

Sale Price 24.37
Buy Now
3rd Party 59.91
In Stock.
See what people are saying about this story or others
See Comments in Forum
Previous Next
Pre-Orders
Tomorrow's latest releases