Howling II: Your Sister is a Werewolf

After newscaster Karen White's shocking on-screen transformation and violent death (in the original THE HOWLING), her brother Ben (Reb Brown, Yor, the Hunter of the Future) is approached by Stefan Crosscoe (Christopher Lee), a mysterious man who claims that Karen has, in fact, become a werewolf. But this is the least of their worries... to save mankind, Stefan and Ben must travel to Transylvania to battle and destroy Stirba (Sybil Danning), the immortal queen of all werewolves, before she is restored to her full powers!

The most disturbing moment in 'Howling II' doesn't even happen until the end, just before the closing credits. That means, that in a horror movie about werewolves with plenty of gory special effects, erotic sequences of actors completely covered in clumps of hair, and copious amounts of bare breasts flopping about, audiences are made to wait for something even remotely creepy when everything is already said and done. And the scene in question where a short, stocky man dressed like a priest does an uncanny impersonation of Peter Lorre is not the sort of last-minute scare that hints at a sequel or an attempt to make viewers jump in their seats for the last time. It ultimately feels as though it was tacked-on at the last minute, meant simply for creating an eerie and ominous air that's weirdly of no consequence to the rest of the movie or the characters talking to the strange old man.

However, rather than thinking of it as a negative, this final scene is really part of the production's continued appeal — one of several reasons for its cult status and a fairly devoted fan-base to the franchise. Awfully bad as the movie objectively is, it is so in spectacularly hilarious ways that still prompt unintentional bursts of laughter while also admiring a few notable instances of a knowing production team aware of subculture trends at the time. If the weird conversation with the creepy old man doesn't leave viewers scratching their heads of what the hell that was all about, then they'll quickly forget it with a post-credit sequence that works like a highlights reel of the movie's most striking moments to the tune of New Wave band Babel performing "The Howling." Although seeing the film's star Sybil Danning repeatedly, ahem, bare her best traits, I actually enjoyed the concert best because astute music fans can read Batcave, GBH, Specimen, Siouxsie and the Banshees, The Cramps and Alien Sex Fiend painted on the back walls. It goes to show that director Philippe Mora and his team try to live up to the movie's promotional tagline, "The Rocking, Shocking, New Wave of Horror!"

I wouldn't go so far as to suggest they do an excellent job at it, but, hey, at least they gave it that old college try. Even screen legend Christopher Lee joins the fun and shows he's a hip guy by walking into the nightclub donning some "rad shades" and pounding a couple drinks. It's a brief moment of comic relief after opening with a stern reading and a funeral service. Truth is he enters the club because he's on the job, keeping tabs on a local L.A. wolf pack prowling the club scene like it were a delicatessen. Lee's gravely serious Stefan Crosscoe — even his name implies a glum individual with a face that would writhe in pain if it dared to smile — is a recluse lycanthrope hunter, who apparently sucks at being covert and his secret hideout is known to the mythical shape-shifters. It's these little minor details which make the story written by Gary Brandner, the original author of 'The Howling' series, rather silly. But let's not quibble over such hairsplitting particulars when, hey, look! The movie features a performance from horror genre icon Christopher Lee! 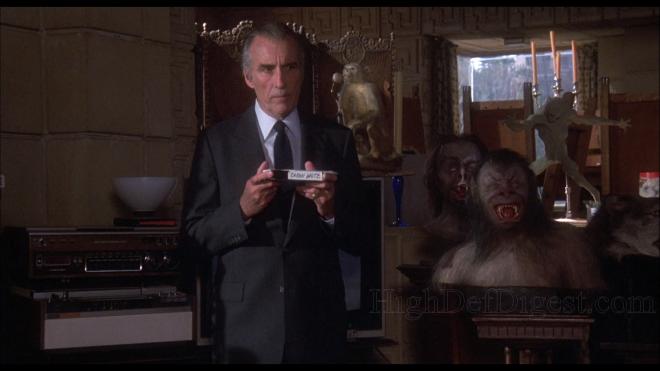 The absurdity continues when for some unexplained reason, Stefan asks the help of disgruntled disbeliever Ben (Reb Brown), brother of the first's heroine Karen, and the weirdly keen journalist Jenny (Annie McEnroe), Karen's former colleague. Brown, who cult enthusiasts will immediately recognize from B-movie classic 'Yor, the Hunter from the Future,' the terrifically bad 'Space Mutiny,' and Bruno Mattei's hysterically awful rip-off 'Robowar,' does a decent enough job though he's far too tense and stiff to ever feel genuine. McEnroe, on the other hand, steals the show by distracting viewers with one of the most painfully terrible performances imaginable. She's completely devoid of emotion and reads her lines like it were the worst parody of Julie Hagerty's Elaine from 'Airplane!' At times, she seems incapable of turning her neck, rigidly moving her entire body in order to talk to others. And she's suddenly expected to turn up the charm and put the moves on Brown as if sparks were flying from the instant they meet. Their sex scene is even yawn-inducing, for crying out loud.

Shout! Factory brings 'Howling II' to Blu-ray under the distributor's Scream Factory line. The Region A locked, BD50 disc is housed inside the normal blue case with reversible cover art. At startup, the disc goes to a menu screen with full-motion clips while music plays in the background.

Probably taken from the best available elements, the hairy beasts show off their sexy blood ritual with a nicely detailed 1080p/AVC MPEG-4 encode. The 1.85:1 image is sadly peppered with a fair amount of white specks, dirt and a couple vertical lines, but the source appears to be in excellent condition, making this edition a significant upgrade over previous home video releases.

Fine lines and objects are distinctly clear in every scene although there are several soft moments throughout, mostly related to the quality of the elements, editing transitions and certain stylistic choices in the photography. Otherwise, definition and resolution are generally pleasing with strong shadow delineation and revealing facial complexions. The color palette also benefits with vibrant primaries and bold secondary hues, and black levels are accurate and true, providing the picture with some appreciable depth. Contrast, however, has been bumped slightly, which is both good and bade, making for a brighter image but also creating a bit of posterization and blooming in the highlights.

The horror sequel howls and barks its way to Blu-ray with a mostly satisfying DTS-HD Master Audio mono soundtrack. Though it may be restricted to the center of the screen, it remains true to the original design, exhibiting a variety of background activity that gives the presentation a broad sense of presence.

Details are distinct and audible throughout, thanks to a strong and fairly extensive dynamic range. However, the lossless mix does appear a bit limited, failing to offer much in the upper frequencies and feeling somewhat bright during the louder moments. Nevertheless, vocals remain clear and well-prioritized, giving Christopher Lee and Sybil Danning the opportunity to truly shine. Most impressive is a very satisfying low-end, providing some palpable oomph and depth to the music and the many action sequences.

Starring Christopher Lee and Sybil Danning, 'Howling II' is the unintentionally hilarious follow-up of Joe Dante's much-better werewolf feature, full of largely terrible performances and cheap-looking special effects. Ironically, the movie's schlocky silliness makes for a fun watch. The Blu-ray arrives with a strong audio and video presentation that should please fans as a step up from previous home video editions. With a healthy assortment of supplements to sift through, the overall package makes for a very nice addition to the cult collection.