Vincent (Robert Sheehan), a young man with Tourette's syndrome, just lost his mom. As his symptoms get worse, his dad (Robert Patrick), a frustrated politician, sends him to a behavioral clinic run by an unconventional doctor (Kyra Sedgwick). But Vincent made his mom a promise, and with the help of a rebellious anorexic (Zoe Kravitz) and his withdrawn OCD roommate (Dev Patel), the three embark on a life-changing race to the sea that includes car theft, shoplifting, fights, self-discovery, and maybe finding a new way to live.

"Journey films" or "awkward road trip" movies are pretty common place, there are at least a few released every year. Some of these flicks tend to skew more towards the dramatic side of things and offer ponderous life lessons while others are content as being silly comedies that don't challenge the viewer beyond surface shenanigans and comedic hijinks. Written and Directed by Gren Wells, 'The Road Within' tells the tale of a group of misfit friends who go on a road trip. While the destination is important, it's the journey that brings them together.

Having a disorder or an affliction that causes regular disruption to your day to day routine can be stressful. It's not only stressful and difficult for the individual but those people such as friends and family who are a part of that person's support structure. In the case of Vincent (Alex Sheehan) he has a severe form of high symptom Tourette's. On top of his condition, he's recently lost his mother. His parents divorced long ago so now Vincent has to stay with his politically ambitious father Robert (Robert Patrick) - only Robert doesn't have the first idea how to adequately care for his son. While he tries to build a political career and start a new family, Robert thinks it's best to ship Vincent off to a specialized care facility for some new ground-breaking experimental treatment headed up by Dr. Mia Rose (Kyra Sedgwick).

Believing that a roommate would be good for Vincent, Dr. Rose pairs him up with Alex (Dev Patel) who has his own extreme malady in the form of crippling OCD. After his new roommate states and shows his obvious disdain for this new living situation, Vincent is introduced to Marie (Zoë Kravitz) who is assigned to show him around the facility. Marie is at the facility for an eating disorder making her, Vincent, and Alex the perfect trio of would-be friends who have to deal with each other's eccentricities.

Before Vincent's mother died, he made her the promise that he would scatter her ashes at some place near the ocean in California. His mother and father were always vague about this place as it was the location of one of the few happy times in the life they used to share. With his mother's ashes packed with him, the care facility is a constant reminder to Vincent of this promise that he's so far failed to keep. After an incident involving some kids recording Vincent's tics - Marie ends up with Dr. Rose's car keys in her possession. When Alex threatens to expose their attempt to flee, Marie and Vincent are forced to bring Alex with them against his will. Without a clear destination, the trio are left to find where they're going on their own without clean clothes, food, or cash and with Vincent's Father and Dr. Rose looking for them. 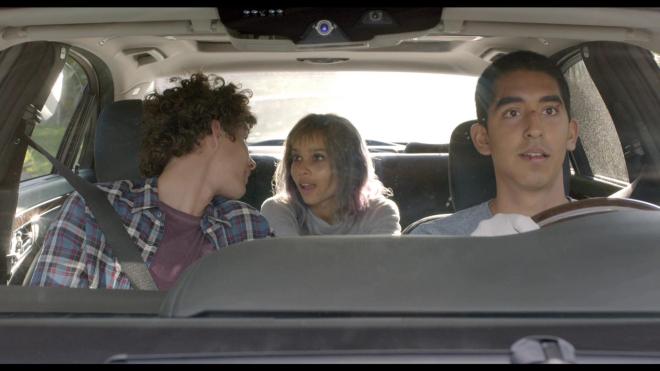 'The Road Within' is one of those movies that tries to balance the tough dramatics of people dealing with various personal issues with dips into humor. Thankfully the film succeeds in this area. Some of the setups for comedy may seem a bit inappropriate considering the various mental conditions on display, but at the same time when you consider how these sorts of issues have been portrayed in the past - 'The Road Within' is actually very subdued and respectful. "Personal Journey" movies can at times be a bit of a tough sell for me. Usually these films have some sort of life affirmation agenda that I have a difficult time signing up for because of their "rose-colored glasses" approach towards life's eccentricities, but this one I found to be pleasantly enjoyable. If there is an equivalency to compare this film to I'd say it's about on par with Emilio Estevez's film 'The Way' starring his father Martin Sheen. Both cover the personally introspective journey material with a similar humorous yet somber tone that feels mature and resonate.

The success of this film is due in a large part to the fine cast of young actors assembled. Depictions of Tourette's or OCD are often played with a level of insensitivity that can be a bit tough to watch after awhile, but thankfully Alex Sheehan and Dev Patel play their respective conditions with an earnestness that doesn't feel like we as the audience are supposed to laugh at them. Yes, some of the situations their ticks and quarks can get them are funny, but the conditions themselves aren't the thrust of the humor. Likewise Zoë Kravitz's depiction of an eating disorder, while not the main focus, is at least depicted fairly and honestly. Together the cast has a great chemistry and they perform well together making their characters actually feel like real characters rather than caricatures. Robert Patrick's path as a distant father who becomes involved in his son's life may feel at times a bit on the nose, but it doesn't keep the man from playing the "father of few words" role very well.

At the end of the day, I found 'The Road Within' to be a very nice and entertaining movie. I can see some viewers out there finding this movie to be a bit trite or formulaic, but at the same time the movie works because it doesn't try to break the mold. At just an hour and forty minutes, 'The Road Within' proves to be a worthy watch and features a strong cast of up and coming actors who show they've got a lot of talent to offer.

'The Road Within' arrives on Blu-ray thanks to Well Go USA and is pressed on a Region A locked BD25 disc and housed in a standard case. The disc opens to a series of previews for other Well Go USA titles before arriving at the main menu.

'The Road Within' has a strong yet problematic 1080p 1.85:1 transfer for this Blu-ray presentation. On one hand where a scene has controlled interior lighting, things look splendid boasting crisp and clean detail levels, inky blacks and shadows, and wonderfully vibrant colors with accurate flesh tones. When things move outside - the image runs into some problem spots. Contrast is a big issue as many scenes can appear overly bright and at the same time flatten the image. This is especially troublesome during wide establishing shots. The film has an intensional haziness to it that the contrast troubles can exacerbate making the edges of the image look out of focus and smeary. Over all the image is very good, but when the troubles pop up they're very noticeable.

Well Go USA has seen fit to offer viewers an English DTS-HD MA 5.1 track as well as a Dolby Digital 2.0 track for people to get the most out of their viewing of 'The Road Within.' It's a tough one to call which track works better. While the DTS track has a bit more power, the Dolby stereo track feels a bit more balanced. Part of this is because the there just isn't a whole lot of surround activity for the DTS track making the available dialogue, music and sound effects feel a bit too spread out. On the other hand the Dolby stereo track feels very balanced and present. Don't get me wrong, both are great tracks and do right by this film, but in this case the stereo mix just feels like the stronger of the two.

Deleted Scenes: (HD 13:03) These few scenes are really just extra character moments that don't really add a whole lot - some work better than others, but it's clear to see why they were left out.

Interviews: (HD 16:47) The cast and Writer/Director Gren Wells talk about the film, the shoot and other aspects of 'The Road Within.' Sadly this is pretty typical EPK material that doesn't really feel expansive or informative.

Oh Honey 'Get It Right' Music Video: (HD 4:16) It's a nice companion piece - if you liked the song, it's a decent enough video

Trailer: (HD 1:55) This is another of those instances where a preview can pretty much sum up an entire film in 120 seconds. If you want to fully enjoy this movie, dodge viewing the trailer.

'The Road Within' is just one of those "nice" movies you can enjoy on a sunny afternoon or warm evening. The story may be a bit familiar but Writer/Director Gren Wells gets some pretty great performances out of his young cast who offer a lot to appreciate and help make this film feel unique. Well Go USA has done a pretty decent job putting this disc together, the image quality is strong although problematic, but at least the audio is fine and there are a couple extras to enjoy as well. Over all I'm calling this one as being worth a look.

Sale Price 29.98
Buy Now
3rd Party 19.91
In Stock.
See what people are saying about this story or others
See Comments in Forum
Previous Next
Pre-Orders
Tomorrow's latest releases