After a priceless painting is stolen, shady art dealer Charlie Mortdecai (Johnny Depp) is recruited by an old rival (Ewan McGregor) to get it back. Mortdecai questions his rival's intentions, but takes the job for the money and to keep his high-maintenance wife (Gwyneth Paltrow) happy. With the help of his manservant (Paul Bettany), Mortdecai must face terrorists, angry Russians and more in a hilarious globe-trotting chase.

About halfway into 'Mortdecai,' a massively embarrassing and misguided heist comedy from David Koepp (writer of 'Jurassic Park,' Mission: Impossible,' 'Premium Rush' and many more), audiences are given one small but quickly fading spark of hope that the colossal flop might actually turn funny. For one very brief moment, viewers might actually chuckle after long stretches of not even cracking a smile and continuously looking at their watches, wondering in anticipation when the punishment will finally come to end. And I'm about to give the scene away, expose what could be evidence of inspired brilliance which somehow immediately died not even half a minute after it was born. The whole movie, starring the likes of Johnny Deep, Gwyneth Paltrow, Paul Bettany and Ewan McGregor, is such a stupendously awful misfire that this one unfortunately minor but also rather dumb moment is the production's most regrettably memorable bit. And still, it's also its most frustrating promise of what could have been.

After we are initially introduced to the titular character during an art deal that goes awry in Hong Kong — a possible 'Indiana Jones and the Temple of Doom' homage, but that suggests the makers had any intentional forethought — we're forced to sit through several minutes of gags about Charlie Mortdecai's newly grown curly mustache. And in case the jokes are not clearly understood due to the inflated stuffy accents, Paltrow's dutiful wife Johanna literally gags when the prickly whiskers touch her lips, triggering Charlie's overly sensitive sympathetic gag reflex. None of it is remotely funny in the least, but that doesn't stop the filmmakers from turning it into a running gag for another 40 minutes. While on the hunt for a once believed lost but now stolen Goya painting, Charlie arrives in a Los Angeles hotel where he's quickly surrounded by several mustached aficionados. Watching his face go from shock to tumultuous joy, feeling as though finding a place where he'd be esteemed, is side-splittingly earned. 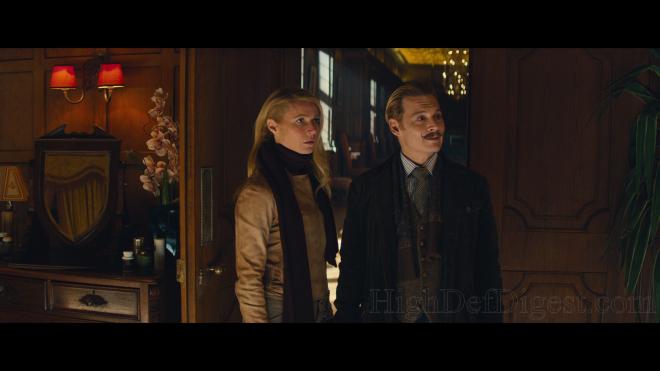 Sadly, this is the one and only moment worth admiring in a 106-minute vehicle based on the first book of the cult 1970s British adventure series by Kyril Bonfiglioli. The remainder of the time is spent, as viewers watch in agonizing awe Depp flushing away his career in yet another disastrous miscarry, churning out more quips, one-liners and pratfalls that repeatedly dull the senses into exasperating boredom. Cinephiles will be quick to notice what Koepp and producers were aiming for: a dry anachronistic British caper comedy along the same lines as Mike Myers's successful 'Austin Powers' franchise. But the entire endeavor is decades too late with dated, trite jokes, and Depp's impression of Terry Thomas — with gap teeth and everything — bumbling his way through Peter Sellers territory is sure to go over the heads of many, if not all, moviegoers. It's a poorly pieced together pastiche that never seems sure if it wants to be a straight-faced campy romp or blindly aim for the lowest denominator.

In the head-scratching 'Mortdecai,' when it's made painfully obvious that everyone knows Charlie is an incompetent, blundering dope, we're left wondering why in the world would McGregor's MI5 agent Inspector Martland hire him to recover a priceless artifact. Sometime ago, the movie might have found an audience, especially given the sort of humor, like Mortdecai's overtly virile manservant being named Jock Strapp (Bettany) who is a scarred sex-addict — which is itself another running gag. Then, there's also mention of Olivia Munn's nymphomaniac Georgina that goes nowhere, a few cracks about testicles being electrocuted and Jeff Goldblum makes a pointless appearance. But today, the whole endeavor is a phlegmatic mess that nauseates much in the same way Paltrow reacts to Depp's stately stache. In fact, that pretty much sums up this catastrophic train wreck, one where we can imagine only those involved in its making are probably giddily laughing while the rest of us shake our heads at the waste of talent on display.

Lionsgate Home Entertainment brings 'Mortdecai' to Blu-ray on a Region A locked, BD50 disc housed inside a blue, eco-cutout case with a glossy slipcover and a code for an UltraViolet Digital Copy. At startup, the disc commences with a series of skippable trailers before switching to the standard menu screen with full-motion clips and music.

The super nincompoop sleuth bumbles his way onto Blu-ray with a smashing 1080p/AVC MPEG-4 encode that's sure to stir a few twirls of one's elegant soup-strainer. Shot entirely on high-definition cameras, the digital-to-digital transfer offers excellent razor-sharp details in nearly every scene. Every leaf and line on trees are plain and distinct while individual bricks of the affluent mansions can be practically counted. Facial complexions are healthy and incredibly revealing, exposing wrinkle, blemish and pores in the entire cast. Contrast is very well-balanced with crisp, brilliant whites, and the colors are richly saturated and energetic, particularly the primaries to give the comedy a cheerful appeal.

Presented in a 2.40:1 aspect ratio, the only point of concern in the image is the slightly less than satisfying blacks. Brightness levels, for the most part, are in good shape, especially during daylight sequences, but nighttime scenes and poorly-lit interiors fall flat and dull. Shadows details remain strong throughout, but those darker portions are noticeably murky and tend to soften the overall picture some. Otherwise, Mortdecai shows off his splendid mustache in style and with class.

Though not quite as audacious and debonair in the audio department, the jester of the art dealing world toots his own horn with a prim and proper DTS-HD MA soundtrack that should nonetheless satisfy. Much of the action takes place in the front soundstage, creating a wide and spacious imaging with plenty of amusing off-screen activity and excellent channel separation. The wacky, pretentious accents of the actors, especially that of Depp and Bettany, are crisp and well-prioritized although a few words can seem a tad difficult to clearly make out from time to time. The action is highly-detailed and distinct thanks to an outstanding dynamic range, exhibiting lots of clarity and definition between the mids and highs. Low bass is surprisingly punchy and responsive; however, much of that power is generally used by the music rather than action, giving the score appreciably presence and weight. The rears are very well employed or particularly noteworthy, but occasionally, they are called upon to expand the soundfield.

The offbeat caper comedy 'Mortdecai' works tirelessly at producing laughs but fails miserably at every turn, churning one mind-numbingly, tediously dull gag after another. Starring Johnny Deep, Gwyneth Paltrow, Paul Bettany, and Ewan McGregor, the whole endeavor is a stupendously awful misfire with one minor but dumb moment. The Blu-ray arrives with a shockingly excellent picture quality and a mostly satisfying audio presentation, but thankfully, supplements are in very short supply. In the end, the overall package is another example of good disc, bad flick.

Sale Price 14.99
Buy Now
3rd Party 12.22
In Stock.
See what people are saying about this story or others
See Comments in Forum
Previous Next
Pre-Orders
Tomorrow's latest releases