Unfortunate scientist Norman Taylor (Peter Wyngarde) discovers that his wife (Janet Blair) may be a reborn witch. Although his skeptical mind allows for no such occurrence, he becomes increasingly suspicious as the voodoo activity around his household grows more prevalent. Folks are murdered, eagles disrupt the good doctor's study, and general havoc is unleased. It's up to Taylor to figure out who the real culprit of all the strange phenomena is. From the same team that brought you THE CONQUEROR WORM, THE PIT AND THE PENDULUM, and other midnite horror classics comes this adaption of Fritz Leiber's CONJURE WIFE. (The Gothic horror novel had been previously adapted in 1944, as WEIRD WOMAN).

Classic late 50s and early 60s horror movies were so common and prevalent at movie houses and drive-in theaters across the country that there needed to be a unique hook to not only market the film, but also introduce the film. A film could already be tapping into a trendy story trope like witchcraft, demonic possession, ghosts, or creepy-crawly creatures but then the film would need that extra little William Castle stylized hook at the beginning featuring some sort of omniscient voice telling the audience that everything will be okay and they're there to protect you. The Richard Matheson co-written Horror/Thriller 'Burn, Witch, Burn' dips a toe in those cliche waters and yet still manages to come out as a tense and unnerving film that keeps the viewers on the edge of their seats.

Professor Norman Taylor (Peter Wyngarde) teaches classes about old world witchcraft and its association with mass hysteria. As a skeptic, the man doesn't believe in the power of witchcraft or spells, hexes, or even demonic possession. In his mind, that type of thinking went out of fashion in the middle ages as man has progressed into becoming free thinking and rational beings… or so he believes. As his classes have increased in popularity with students and their attendance and grades have risen, Norman's star in on the rise in the academic community and he may well be in line for a promotion. Thinking it is all due to his honest and persistent work ethic and perhaps a little elbow grease, Norman isn't aware in the slightest bit that his good fortune may be owed to some sort of outside influences.

Little does Norman know that his beautiful wife Tansy (Janet Blair) has been practicing various forms of witchcraft for years. The woman believes that through her spells and dark arts that she's been protecting Norman from dangerous faculty members who would otherwise conspire to ruin his advancing career. When Norman finds out about Tansy's silly antics he rationally demands that she destroy all of her protective charms and spells. He sees his good fortune as an outcome of his hard work and not being a result from her childish antics. Even when things start to go bad, Norman still believes in the rational world.

After a female student accuses Norman of sexual misconduct and another student threatens him with a gun, Norman fails to see the link that Tansy's witchcraft may have been helping him all along. Determined to protect her husband, Tansy sets off to their country cabin by the sea to perform one last act of black magic to ensure that her husband's life is forever protected. Neither of them seem to be aware that these behaviors are all according to the plan of someone with a grudge against them and that their lives and their immortal souls are in grave danger. 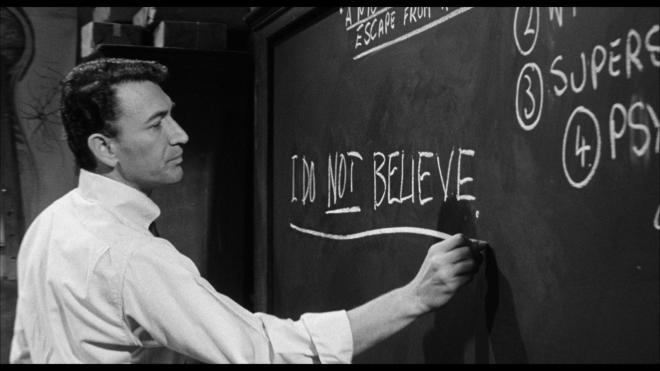 'Burn, Witch, Burn' is one of those classic horror movies that knew how to practice good showmanship. From the opening Paul Frees narration performing a protective incantation over the theater audience to the final shot with a closing title card asking the audience "Do you believe?" 'Burn, Witch, Burn' grabs your attention and never lets go. Part of the reason this film is so effective is that co-writers Charles Beaumont and the legendary Richard Matheson, as well as director Sidney Hayers, have a total and complete respect for the material. This is the kind of story that could easily have become some sort of cheap run-of-the-mill drive-in horror flick that would have been churned out inside of three or four days, shot into theaters and then never seen again. But by placing this would-be camp horror film into the realm of a psychological thriller, the film ends up being a tense potboiler.

Even with the strong script and assured direction, 'Burn, Witch, Burn' wouldn't have amounted to much without the complete commitment from its cast. Peter Wyngarde is absolutely fantastic as Norman Taylor. He convincingly plays a man that totally shuns the world of magic and mysticism even when the overwhelming evidence to its existence is staring him right in the face. Janet Blair is an absolute delight throughout the movie. She does an amazing job playing her role as Tansy as she constantly keeps you guessing her motivations and true intentions. Her character says she's only trying to help, but some of her actions say otherwise. I would love to talk about the rest of the cast, I really would, but I just can't because doing so would spoil a lot of the mystery, tension, and even the fun of this movie.

'Burn, Witch, Burn' is another one of those movies from my childhood that I had completely forgotten about. Part of the reason I'd forgotten it is because this film is also commonly known as 'Night of the Eagle.' Neither title offers up a fair or accurate depiction of the movie, but 'Night of the Eagle' sounds more like a WWII movie about Nazi's than a film about witchcraft and murder. That said, I am extremely happy to have rediscovered this Horror gem. The nostalgia hit me like a ton of bricks and even as I remembered the various plot intricacies as they unfolded. I loved that the tension never diminished for even a second and by the time the film ended and Leo The Lion gave out his magnificent roar reminding me that this was an MGM release, I was immediately ready to start this movie all over again.

'Burn, Witch, Burn' makes its Blu-ray debut thanks to Kino Lorber. Pressed on a Region A Locked BD25 disc, the disc comes housed in a standard case with reversible artwork and opens directly to the main menu.

'Burn, Witch, Burn' evidently worked some kind of black magic because this is a darn fine looking 1.85:1 1080p Blu-ray transfer. Fine film grain has been retained and offers up some sumptuous detail levels. Close up and middle shots get the best treatment, but even the more action heavy wide shots offer up plenty of fine details to appreciate. Black levels and shadows offer plenty of separation and a natural looking grading while also maintaining rich and inky gray tones. Depth is absolutely fantastic as the film maintains a tight and tense claustrophobic atmosphere where the entire frame is frequently cluttered with random objects. The last fifty years have been very kind to this print as there are only modest levels of speckling and only a couple of scratches that are barely noticeable. In fact, the only real drawback for this transfer are the handful of times an optical zoom effect was employed as those very brief moments had an exaggerated grain structure and contrast levels fluctuated ever so slightly. Otherwise, I found this to be a near-perfect transfer for a catalogue title.

For a somewhat calm and determined movie that gathers steam and runs fast towards the finish line, 'Burn, Witch, Burn' earns some solid marks for it's DTS-HD MA 2.0 audio track. Dialogue for the most part, comes through crisp and clean without any age-related hiss, pops or dropouts to bring down the track. Even as a repurposed mono track, the imaging for this film is rather impressive since so much of the movie relies on quiet to pump up some of the scares. As the film builds, things become gradually louder. Levels are for the most part pretty solid in this arena, but there were a couple instances of distortion when some of the characters start screaming. Beyond those couple moments, this is a relatively flawless audio track.

Audio Commentary: The late Richard Matheson flies solo for this commentary track and does a fantastic job. This is an entertaining and informative track that offers some insight into the production of the film, but especially interesting to learn about is Matheson's writing techniques and the story genesis. A must listen.

Peter Wyngarde Interview: (HD 24:26) It's awesome to see Wyngarde talk about his career and the reason why he ended up taking up the role so he could afford his dream car. Even though he hated the script it didn't stop him from delivering a heck of a performance and working to help shape the material into what it is today.

Original Trailer: (HD 2:28) A Solid trailer that actually gives a bit too much of the film away. If you want to be surprised by the movie, save the trailer for desert.

A good classic horror movie that is treated well on Blu-ray is a real treat. 'Burn, Witch, Burn' is an impressively strong Blu-ray release from Kino Lorber featuring a creepy movie, a beautiful image transfer, a resonate and effective audio track, and a couple of decent extra features. Fans should be more than pleased and newcomers should seek this title out. Very highly recommended.

Sale Price 14.99
List Price 29.95
Buy Now
3rd Party 13.99
In Stock.
See what people are saying about this story or others
See Comments in Forum
Previous Next
Pre-Orders
Tomorrow's latest releases