In Italy, during World War II some American soldiers find an alien UFO.

Sometimes, it's best not to fight what you're seeing and just let a goofy sci-fi movie be a goofy sci-fi movie. If you're willingly watching 'Plan 9 From Outer Space' don't pretend you're watching something more earnest like 'The Day The Earth Stood Still.' Just the same, if you're watching 'Zone Troopers' it's probably best to remember you're watching something that's meant to entertain small kids and not try to make it bigger or more important than it should be. You'll just spoil all of the fun you should be having.

In the middle of World War II, the allies are pushing their way through Italy and making great advances. While General Patton may be snapping up a number of the headlines, it's the guys on the ground like "The Iron Sarge" (Tim Thomerson) and his squad of ragtag misfits Joey (Timothy Van Patten), and the rough and tough Mittens (Art LaFleaur) that are actually getting the job done. They're so good at fighting off the Axis forces they've started to make names for themselves with their abilities to get out of tough scrapes. For a little extra PR on the unit Stars And Stripes has assigned big time reporter Dolan (Biff Manard) to do a story on The Iron Sarge and his men.

Sarge couldn't care less. He owes all of his luck to good old American ingenuity, training, and equipment. All that matters is the mission. As the group of men get pushed further and further behind enemy lines - they start to encounter weird happenings. For starters their compass won't settle, making it impossible to navigate. The next strange thing is while on night watch, Joey sees a tall furry creature. He reads a lot of science fiction comics and magazines so he thinks he's cracking up from war fatigue. But when the group stumbles upon an alien spacecraft that was shot down by the Nazi's they know Joey wasn't loosing his marbles and the whole squad is in way over their heads.

With the German army barring down on them, Sarge, Joey, Dolan and Mittens are going to have to use their wits, training, and the best equipment manufactured by Americans to keep the Nazi's from their prize. Thankfully they're going to get a little bit of help from one of the surviving extra terrestrials! With all of them working together, they might just make it through the most important battle of the war. 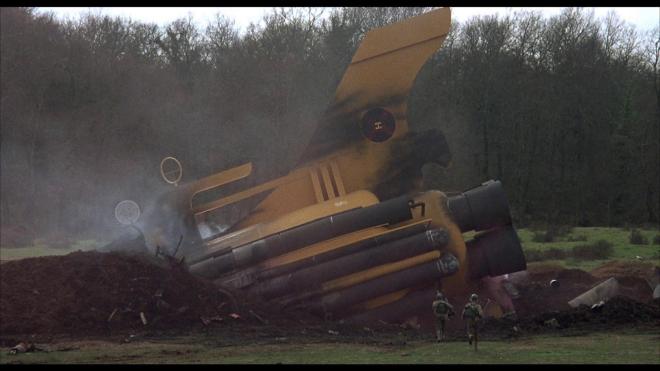 If you haven't guessed by now, it's very hard to take 'Zone Troopers' seriously - so it's best to just let things be and go with the flow. For a low budget, screwball sci-fi adventure movie, it's one of those little innocent flicks that you just put your feet up and let the hijinks happen without straining your brain too hard. For a small little film shot on a meager budget in Italy, director Danny Bilson gets a lot of milage out of a scant few sets, some repurposed Star Trek-looking uniforms, some plywood space ships, and some old army surplus equipment.

Pretty much from the get go the movie proves to be a fun time, and one that kicked me right back to my childhood. I probably haven't seen this movie in over 25 years - if not longer than that. For the life of me I couldn't remember what the name of this movie was and as time went on I'd started to forget details about the flick that would help me figure it out. Thankfully everything came rushing back as soon as that goofy furry-headed alien showed up and sent off his little flying spool thing to turn a falling tree into dust! What was going to be just another goofy movie to watch and review became an instant nostalgia bath. All of a sudden I remembered the movie that I'd spent so many hours watching as a kid and I couldn't be happier to rediscover this movie. It may not be a perfect movie by any stretch, but it's a hell of a lot of fun, and one that if you have little kids roaming around your screening room, they too should be wildly entertained.

If you've never had the pleasure of enjoying 'Zone Troopers' and are itching for some science fiction with a child-like innocence to it, give this one a go. It's not the best piece of cinema out there, but it was never intended to be! It's just a fun movie that's worth the time you put into it.

'Zone Troopers' arrives on Blu-ray thanks to Kino Lorber's Studio Classics line. Pressed on a Region A locked BD25 disc, it comes housed in a standard case and opens directly to the main menu.

For a low budget film from 1985, I was expecting 'Zone Troopers' to be a lot worse for wear, but thankfully this 1.85:1 1080p transfer holds up nicely. That isn't to say it's a marvel of the high definition ages, but it gets the job done well enough. The print is in fine shape with only mild speckling here and there at the front end of the film. Colors have that drab World War II look to them, but otherwise they feel nice and accurate. Primaries have just the right amount of pop to be present but not too over powering and flesh tones look fine, if maybe a tad too pink in some places. With film grain nicely retained and present, detail levels actually look pretty fantastic over all. Facial features and costume detail come through with great clarity and given that most of the film is shot out in the woods, there is a lot to appreciate with the background details as well.

With a DTS_HD MA 2.0 track, 'Zone Troopers' does a pretty decent job getting the most it can out of its audio. It may not be the most impressive track out there but sound effects levels feel nicely balanced allowing the dialogue to come through crisp and cleanly. While it's a pretty strong track over all that gives a nice sense of atmosphere with some subtle imaging, there just isn't a lot of power behind it and can at times sound a bit hollow. Part of the problem for that is the canned war sound effects that never really sound natural, they sound almost like they were layered over a different sound effect like some tinkering had happened in recent years to make the audio more robust. It's not a terrible effect, it's just noticeable and can be a tad distracting when you hear a small rifle sound like a cannon.

Audio Commentary: Director Danny Bilson and Cowriter Paul De Meo sound like a couple of buddies who made a movie thirty years ago and had a little reunion. The track is breezy but informative and it's nice hearing how these guys pulled of the special effects on a slim budget.

Interview With Tim Thomerson: (HD 11:01) "The Iron Sarge" talks about shooting the film in Italy, the production, how he came to the project - it'd been nice to have more for this, or if he'd gotten his own commentary track.

Trailer: (HD 1:32) It's a nice piece of marketing that clearly has a specific audience in mind.

Is 'Zone Troopers' the greatest movie ever made? Heck no. Is it a lot of fun if you just let yourself go with it? You bet. 'Zone Troopers' is probably even better if you have little kids in the room with you as it's a war adventure film with space aliens that they can enjoy until they're suitably old enough to see 'Aliens.' I had a blast watching this one again for the first time in decades and remembering another piece of my childhood. With a solid A/V presentation and a decent couple of extras I'm calling this one recommended. I can't see anyone who just wants to have a good time not enjoying this low budget sci-fi adventure.

Sale Price 49.47
Buy Now
3rd Party 49.47
Usually ships within 6 to 10 days.
See what people are saying about this story or others
See Comments in Forum
Previous Next
Pre-Orders
Tomorrow's latest releases