A horror movie star returns to his famous role after years in a mental institution. But the character seems to be committing murders independent of his will.

'Madhouse' is a fantastic, mostly forgotten horror gem! And in an unexpected way, it terrifically brings to a close what we can call the traditional horror style, particularly for legendary producer Samuel Z. Arkoff and his American International Pictures. That's not to suggest the filmmaker or his company walked away from the business — they continued as distributors of several cult exploitation and foreign films before finally closing shop in 1980. Rather, this 1974 production interestingly marks the end of an era, and Arkoff was keenly aware of it, almost as if bowing down to the new Hollywood style moviegoers were flocking to and starting to demand more of. The culture and the world were quickly changing, and the era of the highly-stylized, atmospherically Gothic horror film, which dominated since the silent age, was finally coming to a close. What once scared audiences up to the 1960s seemed campy, outdated and quaint to the new generation, and graphic shock value was quickly growing as the new norm.

By the time 'Madhouse' was in production, which AIP co-produced with British film company Amicus Productions, the exaggeratedly gory low-budget features of Herschell Gordon Lewis were finding an audience. Moreover, the infamous drive-in double feature 'I Drink Your Blood/I Eat Your Skin,' Wes Craven's 'The Last House on the Left,' Tobe Hooper's 'The Texas Chain Saw Massacre' and Bob Clark's 'Black Christmas' can be seen as the movies ushering in the new trend, the ones which changed the playing field. Of course, it wasn't until the massive box-office success of William Friedkin's 'The Exorcist' that it became abundantly clear the horror genre was forever changed. There are a several other movies I'm not including, I know, but the point is clear: the thickly moody and atmospheric features of old were dead. Elegance, creative stage design, wildly imaginative plots and sensationalism was replaced by gory special effects, graphically violent tales set in the modern world and gritty realism.

Naturally, being the crazed horror fanatic that I am, I'm not pointing this out as a bad thing. On the contrary, I love the move though still cherish all that came before it because while others talk about the rise of the New Hollywood, I'm fascinated by this sudden shift within the genre which is rarely mentioned. Watching 'Madhouse,' it seems as though the filmmakers were aware of it and decide to make this a swan song to a bygone era. Incidentally, legends of the genre Basil Rathbone and Boris Karloff, both of whom receive special appearance credits in the movie, passed away a couple years shy of seeing this drastic change while stars Vincent Price and Peter Cushing, both stars of the movie, really only attracted a niche audience by this point in their careers. Though the script by Ken Levison and loosely based on the novel Devilday by Angus Hall doesn't directly address the cultural change in audience expectations, astute viewers will sense its weight nonetheless like a specter hovering over the entire production. 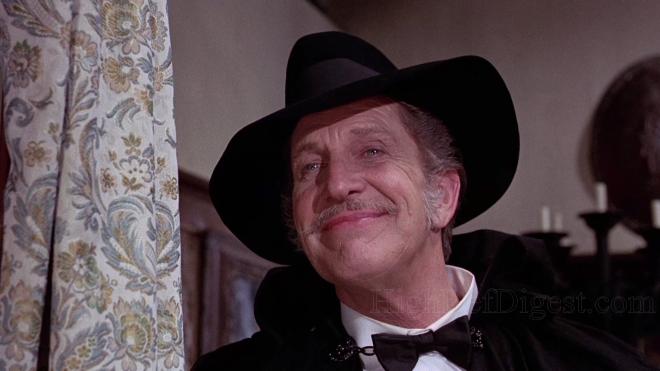 The story opens twelve years earlier when Price's Paul Toombes, which is a fabulous character name by the way, was at the height of his career, a renowned actor known worldwide for his performances in horror films. One night while celebrating his latest role as the sadistic, skull-faced maniac Dr. Death, his young fiancé is murdered in her bedroom and the evidence points to him as the culprit. After years of therapy and being found innocent of foul play, the aging actor is asked to reprise his trademark role once more because apparently, there's an audience that still fondly remembers him and his films. But sadly, his return is marred with a serious of gruesome murders that once again point to him as the killer. One of the best parts of this mystery tale is that it leaves us wondering of Toombes's sanity and the possibility he might actually be guilty. In the meantime, he's struggles with the voices of his past, and Price delivers one of his most effective and poignant performances of his career. You can almost sense something personal in his portrayal of poor Toombes.

The self-aware cleverness of 'Madhouse' is that director Jim Clark, better known as the award-winning editor of 'The Innocents,' 'The Killing Fields' and 'The Mission,' uses footage from Price's films — namely, those from his Corman-Poe series and 'Scream and Scream Again,' another forgotten gem. In doing this, much of the story feels like a direct commentary on the state of the new filmmaking system where everyone, from producers and actors to groupies and reporters, doesn't seem right in the head, driven mad by an obsession for fame, greed or scandalous gossip, making the film's title all the more appropriate. The only sane person is publicist Julia (Natasha Pyne), but her boss Oliver Quayle (Robert Quarry), a producer of adult films, is a slimy creep with obvious ill intentions. Peter Cushing also stars as Toombes's longtime friend Herbert, but he, too, has kept secrets in his basement — a former actress (Adrienne Corri) who's gone a bit nutty herself. The final twist is a beautifully deliberate red herring that leaves audiences scratching their heads while thinking back affectionately when horror films were this stylized, atmospheric and wildly imaginative.

Kino Classics brings 'Madhouse (1974)' to Blu-ray on a Region A locked, BD25 disc inside the standard blue keepcase. At startup, viewers are taken directly to a static main menu with music.

Everyone goes a little mad with a great and nicely detailed AVC-encoded transfer that guarantees to please fans. A few scenes haven't aged well, but overall, the elements are in great condition with strong resolution and clarity throughout. Although the source could benefit tremendously from a full restoration, showing a good amount of white specks and dirt in several sequences, the presentation is terrifically well-defined. Fine lines in clothing, hair and furniture are distinct, and every pore, wrinkle and blemish are exposed in the faces of actors. Footage from classic AIP films is forgiven as a deliberate creative choice. Contrast is spot-on and comfortably bright while black levels are true and accurate, except for a few moments where shadows come off a bit too strong. The palette is bold and energetic, providing the 1.85:1 image with a lively and rejuvenated feel.

The wonderful horror gem also finds release from insanity with an excellent DTS-HD Master Audio mono soundtrack that entertains from start to finish. Although there are few instances of vocals seeming detached and out of sync with the picture, dialogue reproduction nonetheless remains clean and intelligible in the center so that we hear every nuance and hysterics in the performances. The soundstage comes with a great sense of presence and clarity, delivering plenty of audible off-screen activity without a hint of distortion or noise. Dynamic range is surprisingly extensive with lots of detailing, giving the music and action strong transparency and fidelity, and while the low end doesn't dig deep, bass is adequate and appropriate for a film of this vintage, making for a great lossless mix that fans will appreciate.

Cleverly self-aware and stylized, 'Madhouse' is a fantastic, mostly forgotten horror gem that falls in an interesting point within the history of the horror genre. Starring Vincent Price, Peter Cushing and Robert Quarry, the film is a terrifically entertaining mystery thriller with a deliberately head-scratching final twist that'll leave horror hounds admiring the wickedly wild imagination of the filmmakers. The Blu-ray arrives with a great audio and video presentation, but a much too small assortment of bonus features. Nevertheless, the overall package makes for a nice addition to any cult enthusiast's collection of forgotten oddities.

Sale Price 86.79
Buy Now
3rd Party 86.79
In Stock.
See what people are saying about this story or others
See Comments in Forum
Previous Next
Pre-Orders
Tomorrow's latest releases