In the Iranian ghost-town Bad City, a place that reeks of death and loneliness, the townspeople are unaware they are being stalked by a lonesome vampire.

At once mystifying, unsettling, and bewildering, 'A Girl Walks Home alone at Night' is nonetheless a provocative, stimulating and wonderfully engaging enigma of a motion picture. It is a hauntingly striking, oneiric horror puzzle, a riddle that wants to be solved but withholds its secrets and scorns at the thought of being deciphered instead of loved and accepted just the way it is. With hallucinatory cinematography by Lyle Vincent and excellent methodical editing by Alex O'Flinn, the film challenges audiences, not in the sense that it probes into philosophical ponderings of our existence and time on this planet — though I wouldn't immediately write the movie off from trying. But, that in satisfying genre expectations with phantasmagoric visuals of death and violence, the filmmakers dare — even taunt and dispute — the viewer's reaction with brooding, atmospheric portraits that are stunningly gorgeousness and memorable. On the immediate surface of it, the film can be easily enjoyed as typical vampire fare, but the horror fable genuinely offers more value.

An impressive, breakthrough feature-length debut, writer and director Ana Lily Amirpour explores an imaginary world "that reeks of death and loneliness," a wasteland of a ghost town aptly named Bad City where survival is equated with a life lived. Based on her own graphic novel of the same name, a short but pensive tale that works as a prequel of sorts to this adaptation, Amirpour follows a pair of emotionally-flawed and desolate individuals — the timid, lonesome Arash (Arash Marandi) and the solemn but beautiful nameless vampire (Sheila Vand) — as demonstrative of the town's self-inflicted dreary abandonment and dreary feel of forlornness. The closest the unaffected vampire, simply known as The Girl, comes to having a friend is an aging prostitute (Mozhan Marnò) with a gloomy outer appearance that is as cold and dead as our bloodsucking titular heroine. Arash is no better off with a junkie father (Marshall Manesh) and a local street beggar for a friend (Milad Eghbali). His only connection to the outside is the menacing violent threats of drug dealer Saeed (Dominic Rains), who fashions himself after rapper Ninja of Die Antwoord. 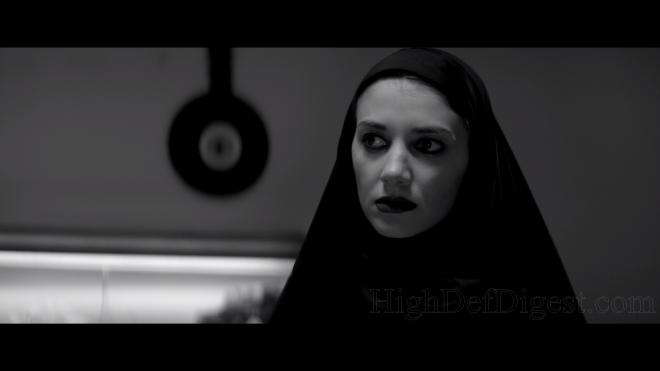 A series of events involving death and various criminal activity bring these seemingly kindred spirits together in one of the most bizarrely romantic coincidences, a darkly gothic but nonetheless fanciful version of the conventional "meet-cute." It's a sweetly charming, singularly quirky moment where The Girl gives a stoned Arash a ride on her skateboard through darken streets to her house and both dance harmoniously to White Lies's "Death." However, before arriving at that earned bit of strange romance, Amirpour takes her audience on a tour of this fictional, soulless Iranian town, a clear nudge and sentiment of the country's current condition and maltreatment of its citizens. After all, it gives prominence to a female bloodsucker more powerful than males and who blasphemously wears the chador like a clichéd cape. On the larger scale, the film is an engrossing, harrowing parable on modernity's current state of apathy, indifference and a seemingly ever-growing detachment, preferring the anguishing sorrows of self-imposed isolation caused by terrifying fears of rejection which result from anxious attempts at making human contact.

Of course, this isn't the only way to watch the electrifyingly, indelibly beautiful film, as the suggestive, highly stylized images play to the heart of cinephiles. Billed as the first Iranian vampire movie — and there is little to doubt the truth of such a bold statement, all things considered — ' A Girl Walks Home alone at Night' visually charms and fascinates with dreamlike fragments prompted and pieced together from Amirpour's favorite movies. Like a surreal Jungian machination that refuses interpretation, scrambling for an identity of its own while admitting to being a product of a larger, inescapable cultural force, the production takes clear inspiration from Abel Ferrara's 'The Addiction' and immersed in the lethargic, evocative universe of Jim Jarmusch. It's a horror Italian western in the vein of contemplative, introspective musings of Jarmusch's 'Only Lovers Left Alive' and Tomas Alfredson's 'Let the Right One In.' Characters are born of the dreamlike, inexplicable weirdness of David Lynch's imagination and suffering Alejandro Jodorowsky's fantastical, otherworldly existence. Bad City's inhabitants are ghosts in search of purpose but lost in a melancholic actuality of failed desires, aimlessly driving down a lonely road in the dark without a destination except for that tenacious desire to simply live.

Kino Lorber brings 'A Girl Walks Home alone at Night' in an attractive collectible package with artwork by Michael DeWeese. The Region A locked, BD50 disc is housed inside a gatefold plastic tray that comes with a side-sliding slipcover. It also includes a 70-page booklet that contains a special copy of Amirpour's graphic novel and an interesting essay from New York Press film critic Eric Kohn. At startup, viewers are taken to a menu screen with full-motion clips and music playing in the background.

The moody, atmospheric film debuts on Blu-ray with a gorgeously haunting 1080p/AVC MPEG-4 encode. Filmed entirely on HD cameras, the stylized cinematography, showing lots of lens flares and most all of it shot in shallow focus, is sleek and clean, revealing sharp, fine lines in the costumes and various household items. While individual hairs are distinct and separate, facial complexions reveal the tiniest wrinkle, pore and negligible blemishes, especially during close-ups. The black and white photography is evocative and moving, displaying inky, rich blacks and shadows that penetrate deep into the screen. Contrast is beautifully well-balanced and comfortably bright with crisp, brilliant whites that never falter. Presented in its original 2.35:1 aspect ratio, the image is often stunning with many memorable, strikingly framed moments.

Like the video, the DTS-HD Master Audio soundtrack is a stylized and moody design meant to generate a sad, atmospherically gothic soundscape, and the morose film is all the better for it.

For a majority of the runtime, the film plays like a stereo presentation with a good deal of the action spread across the front three channels, including the various song selections. But that's not to say the story is any weaker for it. On the contrary, it is all the more haunting and beautifully, displaying a broad, spacious wall of sound with terrifically convincing off-screen effects. Imaging exhibits an excellently detailed mid-range with sharp, distinct clarity between the mids and highs, while channel separation is superbly well-balanced. Occasionally, music amusingly bleeds into the surrounds and mixes well with other minor atmospherics and effective panning effects, nicely creating an engaging and satisfying soundfield. Vocals are precise and well-prioritized throughout with splendid, emotive distinction in each performance. Most impressive is a commanding, powerful low-end which often digs deep into ultra-low depths, adding a great deal of weight and suspenseful tension to certain scenes. This is a stunningly beautiful lossless mix that wonderfully complements the visuals.

At once mystifying, unsettling and bewildering, Ana Lily Amirpour's 'A Girl Walks Home alone at Night' is a hauntingly striking, stimulating and wonderfully engaging enigma of a motion picture. The Blu-ray arrives with excellent video, a splendid audio presentation and a strong collection of supplements. Genre fans will want to give it a rent, but cinephiles will gladly love to add this excellent package to their collection.

Sale Price 24.98
List Price 34.95
Buy Now
3rd Party 24.98
Usually ships within 6 to 10 days.
See what people are saying about this story or others
See Comments in Forum
Previous Next
Pre-Orders
Tomorrow's latest releases