Greg Powell is a disturbed ex-con who recruits Jimmy Smith (aka Jimmy Youngblood), a petty thief, as his partner in crime. Powell panics one night when the two of them are pulled over by a pair of cops for broken brake-lights. Powell decides to kidnap the cops and Smith, as always, reluctantly goes along with Powell's crazy scheme. The group drives out to a deserted onion field in Bakersfield, California and one officer is shot while the other escapes. The remainder of the film explores the nature of the American justice system, as well as the devastating psychological effects of this event and the trial on the surviving officer.

Countless movies are based on true stories, but most alter the bulk of the facts to create a dramatic and entertaining narrative. Yet 'The Onion Field,' Harold Becker's gritty adaptation of Joseph Wambaugh's acclaimed book, goes against the grain, sticking closely to the truth and accurately recreating a series of shocking events, often in the actual locales in which they transpired. The result is a hard-hitting, realistic, and finely executed portrait of a heinous crime and its disturbing aftermath.

Shot on a shoestring budget in a no-frills manner that lends the tale a terse, documentary feel, 'The Onion Field' explores the twisted mind of a career criminal, the dead-end existence of his hapless cohort, and how their violent actions shake up the LAPD, entangle the justice system in red tape, and damage the life of their traumatized surviving victim. The film flaunts a refreshing independent spirit, and Becker's commitment to the truth enhances the story's power and merit. Wambaugh, who also penned the screenplay, was a former police officer who became a bestselling author writing exclusively about police issues. 'The Onion Field' was his first nonfiction book, and his inside perspective helps the film achieve an admirable level of authenticity, which is essential to its ultimate success.

Freshly sprung inmate Jimmy Lee “Youngblood” Smith (Franklyn Seales) meets fellow career felon Gregory Powell (James Woods) by chance at a sidewalk shoe shining station in the L.A. ghetto in 1963. The slick Smith can’t wait to get back in the crime game, and he’s willingly seduced by the unbalanced Powell, a master manipulator with a violent temper. The two team up for a wild and crazed petty crime spree that goes horribly awry when they’re pulled over on a routine traffic stop by detectives Karl Hettinger (John Savage) and Ian Campbell (Ted Danson). In a panic, Powell and Smith abduct the two officers (who foolishly relinquish their firearms) and take them to a deserted onion field in central California. There, a desperate Powell, who believes he’s committed a capital crime by kidnapping the cops, shoots Campbell in cold blood, but Hettinger manages to escape.

The crime itself is horrific enough, but what follows is shameful and appalling. Powell and Smith are quickly captured, but their clever manipulation and abuse of the legal system keep their fate in limbo for years, and the strain of numerous hearings and trials, coupled with palpable survivor’s guilt, exacts a heavy toll on Hettinger, who must deal with post-traumatic stress and numerous psychological issues on the job. For him, that one night in the onion field becomes a never-ending nightmare that irrevocably alters his life.

What begins as a violent look at the life of a deranged sociopath and how a couple of naive policemen become his easy prey evolves into a fascinating examination (and indictment) of the legal system and all the shocking loopholes that allow criminals to shamelessly manipulate the system. The film also shows how a single crime can have a lasting effect not just on the victim, but also on the police force that employs him. The LAPD was a troubled and controversial organization long before Rodney King, and ‘The Onion Field’ deftly peels back various layers of the onion as it dissects the culture that fuels it. Though it would be tempting to put a spin on the material and ramp up sympathy or enmity for the parties involved, Becker wisely takes a step back, adopting an objective approach that allows events to unfold in a realistic manner. His style is terse, raw, and very effective.

As are the performances. Savage, who was just coming off impressive turns in such acclaimed films as ‘The Deer Hunter’ and ‘Hair,’ files an intense, disarmingly believable portrayal of a good guy trapped in a private hell who’s not allowed to escape a shattering experience and move on with his life. One scene of personal turmoil is so brutal it’s tough to watch, but Savage, just as he did in ‘The Deer Hunter,’ always remains natural, even in the most harrowing circumstances.

Woods, in a breakout performance, is terrifically creepy as the off-kilter but surprisingly clever Powell, using all the tricks in his arsenal to make his character as frightening as possible without going completely off the rails. Seals complements him well, and Danson, in his film debut, makes a notable impression as the bagpipe-playing detective who meets a tragic end. Ronny Cox and Christopher Lloyd also crop up in key roles, and eagle eyes will spot Pat Corley of 'Murphy Brown' fame in a small part as one of Smith's attorneys.

'The Onion Field' holds up better than many films of its period due to its realistic style, no-frills presentation, potent script, and top-notch performances. It wowed me as a youth (I still remember seeing it during its theatrical release in 1979), and though it may have lost a bit of its luster over the intervening years, it remains a powerful depiction of a notorious case that not only changed the lives of those it directly touched, but also helped change police procedure in Los Angeles and the justice system at large. 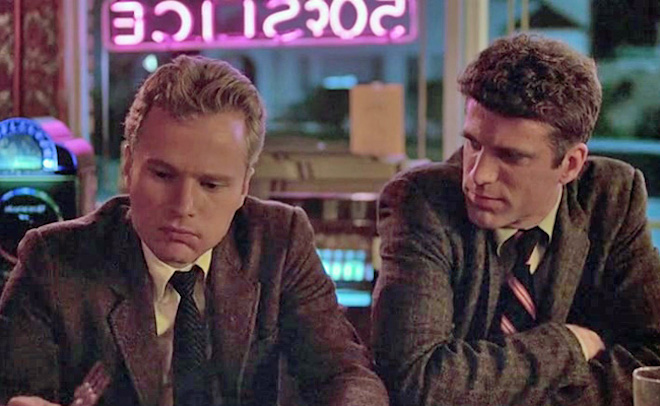 'The Onion Field' arrives on Blu-ray packaged in a standard case. Video codec is 1080p/AVC MPEG-4 and audio is DTS-HD Master Audio 2.0. Once the disc is inserted into the player, the static menu with music immediately pops up; no previews or promos precede it.

'The Onion Field' is a gritty, low-budget film, and the 1080p/AVC MPEG-4 transfer from Kino Lorber nicely honors the director's vision. Natural lighting often lends the image a slightly washed-out look and heavy grain often afflicts nocturnal scenes, but such issues reflect the movie's original appearance and complement the story's semi-documentary feel. Occasional crush creeps into the picture, but details are generally well defined, and though grain levels tend to fluctuate, the visual shifts never take us out of the story. Colors are muted (most likely by design), but blacks are strong, flesh tones look natural and remain stable over the course of the film, and close-ups crisply capture distinct facial features. A consistent string of marks and flecks of dirt sully the source material, but that's to be expected of a 35-year-old film that hasn't been particularly well preserved. Though far from a beautiful transfer, this effort from Kino accurately reflects the film's look, and that's good news indeed. It's just too bad the print is so banged up.

The DTS-HD Master Audio 2.0 track doesn't ooze fidelity or tonal depth, but it gets the job done without much fuss. Subtle atmospherics, such as buzzing insects and peeping crickets, come across well, and sonic accents like gunshots, sirens, slamming jail cell doors, and rumbling car engines, possess appropriate pop. Some of the dialogue can be difficult to decipher due to rapid speech patterns and street dialects, but most conversations are clear and comprehendible. The bagpipes sound especially vibrant, and nicely complement the quiet, foreboding strains of Eumir Deodato's score, which unfortunately never really come alive in this flat, straightforward presentation. As far as audio transfers go, this one is decidedly middle of the road.

A few noteworthy supplements round out this catalogue release.

Solid, searing, and presented in a tough, semi-documentary style, 'The Onion Field' recreates a notorious crime and tangled court case in an affecting, no-frills manner. Harold Becker's adaptation of Joseph Wambaugh's book stays true to the facts and honors not only the story of two ambushed policemen who are terrorized by a couple of thugs in a rural Californian onion field, but also the state's lengthy legal battle for justice. Kino Lorber's Blu-ray presentation features faithful but average video and audio transfers, as well as a few interesting supplements. True-life tales, if done well, generally hold up, and more than 35 years after its initial release,'The Onion Field' still makes some potent points about crime, punishment, the law, and the tortured life of a guilt-ridden victim. Recommended.

Sale Price 52.91
Buy Now
3rd Party 99.95
In Stock.
See what people are saying about this story or others
See Comments in Forum
Previous Next
Pre-Orders
Tomorrow's latest releases