A satire on the ups & downs of being a black actor in Hollywood, Hollywood Shufflewriter/producer/director Robert Townsend (The Five Heartbeats) stars as Bobby Taylor, a young black actor whose attempts to find work are dashed when told that he’s not “black enough” for the roles being offered. With jobs limited to stereotypes (gang-bangers, pimps and Uncle Toms’), Bobby’s struggles are told through a series of comic fantasies and dreams, making all-too-real that he needs to do the Hollywood Shuffle. Co-starring Keenen Ivory Wayans (Scary Movie, TV’s “In Living Color”), Anne-Marie Johnson (Pursuit of Happyness), and Helen Martin (Kiss The Girls, TV’s “227″), Hollywood Shuffle is written, produced & directed by Robert Townsend (Streets of Fire, The Five Heartbeats, The Mighty Quinn, A Soldier’s Story).

It's amazing that nearly thirty years since Robert Townsend's 'Hollywood Shuffle' progress continues to move at a snail's pace for minorities everywhere. To be fair, and before I continue, many of the issues about racial stereotypes and cultural expectations brought to attention by the satirical comedy are primarily focused on the filmmaking industry. But there is also an underlying theme beneath the plot, which Townsend co-wrote with Keenen Ivory Wayans, suggesting these negative portrayals have an impact on audiences, creating a very narrow view and understanding of minorities. Some will quickly jump on the fact that things are not as bad today as they were when this movie was made, but when we read or hear that gender wage gap is a prevalent problem within Hollywood, we have to wonder how much has changed. When Arabic and Indian people are often limited to playing terrorists, or gay couples are still not seen as leading love interests, we should ask just how much progress have we made.

Considering the sad recent events, and the current controversies over flags, Townsend's film remains as relevant as ever. Yes, granted, the comedy is chiefly about Hollywood's treatment of people of color, following the exploits and daydreams of aspiring actor Bobby Taylor (Townsend), but the story is not only limited to the industry. It also exposes a deeper problem, subtlety and in various hilariously clever ways pointing that we, as avid moviegoers, are unwitting participants of the problem, either by ignoring to discuss the issue or endorsing with paying to see it. Largely structured like a sketch comedy, the filmmakers confront these concerns with short skits, each related to Bobby's daily experiences trying to land a major starring role. This main story has the young man question his personal values and morals because the part of a "jive" street thug is offensively stereotypical. Each fantasy segment is essentially him subconsciously struggling with the dilemma.

It doesn't take long before Townsend clues his audience in to his true intentions, especially after a black screen opening with only Bobby's voice practicing his absurdly ridiculous lines with his little brother Stevie (Craigus R. Johnson), who admires and looks up to him. While at the audition, another actor tells our protagonist of how demeaning the role is for African Americans in an effort to discourage him. In his daydream, Bobby imagines himself as a runaway butler slave in a skit that turns out to be a commercial for the "Black Acting School." As if confronting degrading racial stereotypes head on, the actor comments that the school was specifically designed to teach African Americans to be more "black." A bit more troubling, as well as scarily telling, the instructors are all white, plainly suggesting that oversimplified conceptions are largely projected onto others. And then, inside the casting room, the writer, producer and director are seen asking actors to perform to their preferred expectations. 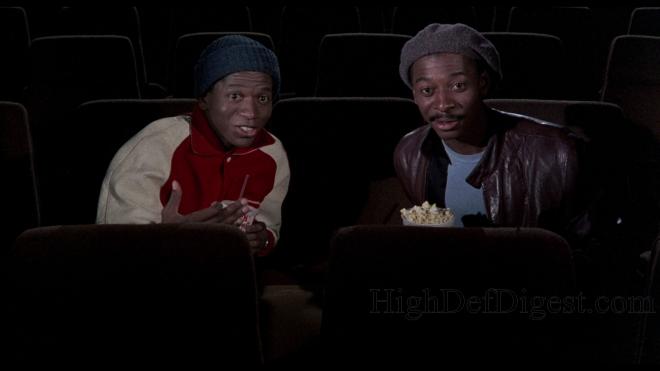 Again, this aspect of the story is made pretty clear, leading to a moment when Bobby finally makes the decision of whether to participate in the perpetuation of negative stereotypes. That scene itself reveals Townsend and his crew are a talented team, balancing the line between humor and seriousness, knowing where the jokes end and the hurt begins. It expresses that part of the problem is with us taking a very apathetic approach to the matter. For some, it's a paying gig — one which presumably leads to the romanticized ideal of success — while for others, namely the audience, it's satisfying entertainment. Townsend and Wayans make the latter point clear in the vignette with the two theater-hopping film critics where they watch parodies of successful movies and funnily point out inaccuracies. However, when they come "Attack of the Street Pimps," they both praise it as accurate reflections of urban life. It's one of the film's funnier moments, but it also speaks to the fact that moviegoers might also be partly to blame for spending money on negative depictions.

Throughout 'Hollywood Shuffle,' Bobby is confronted by various voices pulling him one way or another, and it's not just those inside his head. His boss as the Winky Dinky Dog (the always hilarious John Witherspoon) pushes him to pursue an actual, more attainable career, but his uncle (David McKnight), who was a former singer himself, encourages him to never give up on his dream. His mother (Starletta DuPois) and girlfriend (Anne-Marie Johnson) are supportive, but his grandmother (Helen Martin) is the voice of reason and brings attention to the potential damage the demeaning role can have on future generations, names his little brother. Not speaking up, ignoring that there is a problem or simply choosing to do nothing at all is being part of the problem. It only furthers more negative portrayals and normalizes them to the point of becoming reality, as the screenwriter of the faux movie later admits, having learned about urban life through movies. Much has changed since Townsend's satirical comedy, but considering the events of the last few months, how much has really changed for the better and how much continues to be the problem.

Originally produced by Conquering Unicorn and released The Samuel Goldwyn Company, 'Hollywood Shuffle' comes to Blu-ray courtesy of Olive Films. The Region A locked, BD25 disc is housed inside the standard blue case and at startup, goes straight to a static screen with music.

The cult comedy hasn't had the best of luck on home video, but this 1080p/AVC MPEG-4 encode finally gives the movie a chance to shine, making it the best version available to own. However, as strong as the overall presentation may be, the high-def transfer still comes with a few drawbacks, but the elements are in such great condition that the film could benefit from a full restoration.

Shot in a combination of 35mm and 16mm stock, some sequences are noticeably better than others, and well-lit, daylight scenes are comfortably bright and highly-detailed, showing some excellent texture and definition in the faces of actors. A few moments are intentionally shot with a mild soft focus, but several others are due to poor resolution. The Sam Ace segment is understandably the worst but also forgivable as an artistic choice. The palette, for the most part, is bold and energetic, but colors can seem a bit faded and dull in some areas. Black levels are accurate and darkly rendered, providing the picture with some nice dimensionality. Awash with a visible thin layer of natural grain throughout, the 1.85:1 image has an attractive film-like quality, but it could be stronger.

As with the video, the audio also has its share of bad and good, but, on the whole, it, too, is an improvement over its DVD counterpart. Only, the original sound design was in stereo, but this DTS-HD Master Audio soundtrack is clearly monaural. Everything is tightly focused and restricted to the center screen, which is not entirely a bad thing, but it's not great either.

In spite of that, however, the lossless mix arrives with a strong presence and excellent clarity. Background effects and activity are discretely rendered, creating a decently broad sense of space throughout. When driving through the streets of L.A., cars zoom and pass by, and in each sketch bit, we can distinctly hear Jheri Curl spray on his activator, the dragging footsteps of the zombie street pimps and the rustling of the film critic's jackets. However, the mid-range is largely even and uniform, offering very little noticeable movement into the upper ranges, and this is particularly noticeable in the music, which would greatly benefit from a little more breathing room. Dialogue is precise and intelligible at all times, but most impressive is a responsive and palpable low-end that provides some depth to an otherwise flat presentation.

Robert Townsend's 'Hollywood Shuffle' is a satirical comedy that directly confronts the racial stereotypes of African Americans within the filmmaking industry. But on a deeper level, the story by Townsend and Keenan Ivory Wayans speaks to the troubling issue that negative depictions can be damaging for society and have a lasting impact. The Blu-ray from Olive Films arrives with a strong audio and video presentation that bests all other home video editions available. Sadly, the bare-bones release won't likely tempt the curious, but fans will be happy with the purchase.