Invitation to a Gunfighter

When Confederate soldier Matt Weaver returns to town after the Civil War, he finds that his home has been sold by town boss Sam Brewster. Brewster hires gunfighter Jules Gaspard d'Estaing to deal with Weaver, but d'Estaing's independent approach settles the town's problems in a very unorthodox manner.

Director Richard Wilson opens 'Invitation to a Gunfighter' with a very brief introduction of the two main protagonists traveling to the same New Mexico town only months after the end of the Civil War. One is the magnetic Yul Brynner riding a stagecoach, and we meet him as he does some fancy maneuvering out of the carriage car, slithering his way to take shotgun next to the driver. He's elegantly dressed, clean shaven, and appears to be quite fit, especially after seeing how he jumped to the driver's seat while the stagecoach was speeding along the bumpy desert road. The other man is George Segal who was forced off the road by said stagecoach, and he appears to be in poor health, bearded and looks very unkempt. Dressed in a Confederate soldier's uniform, we can assume he's been walking for miles by foot, and most likely, from wherever he was last in battle. One is a wandering stranger with an easy ride, while the other is tired from his long, treacherous journey on his way home.

Wilson, whose only other known films are 'Man with the Gun' and 1959's 'Al Capone,' cleverly uses the opening credit sequence to invite audiences to compare the two men, to lay judgment and make assumptions based on first appearances. And that we do. Segal's veteran Matt Weaver is immediately the sympathetic character in spite of his fighting for the "rebel cause" because he's on his way home. His weathered face comes with a bit of sadness around the eyes and a small glimmer of hope. Brynner's sharply-dressed stranger Jules Gaspard d'Estaing is a confident, steely-eyed fellow who doesn't look for any sympathy or handouts. His clean-cut appearance suggests he's a gentleman, but there's a tinge of malevolence and scheming in his face, as though he's quick to do harm if provoked. Of course, as we've been told growing up, don't judge a book by its cover, looks can be deceiving. And such is the case in this terrifically entertaining gem that should rank as a classic of western cinema. 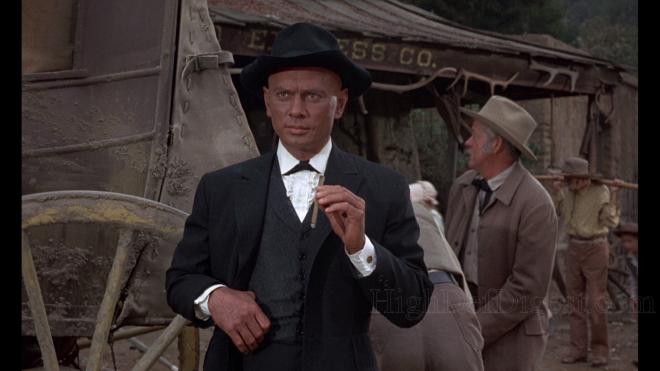 As soon as both men arrive into the sleepy town, we learn things are far more complicated, and our two protagonists — neither of whom could be easily labeled a hero or villain — are far more layered than initially expected. For Weaver, he returns to his family home, where he personally buried his mother, only to discover that the property had been sold by the town's banker Brewster (Pat Hingle), a rather hard, cold-hearted man who wields his influence as if he owned everyone. At the same time, his sweetheart before the war, Ruth (Janice Rule), has married another man. As for Brynner's Jules, the man is a complete mystery, a hired gun paid by Brewster and the townspeople to provoke Weaver into a fight. He goes out of his way to appear the typical ruthless, coldblooded killer he's known for, but several moments reveal he's thoughtful, sympathetic and will fight injustice, making him a difficult anomaly to decipher.

The genius of 'Invitation to a Gunfighter,' originally written by Larry Klein in 1957 for the television anthology series 'Playhouse 90,' is how complex these two characters are — probably more so in the case of Brynner's Jules than Segal's Weaver. Both men have been personally and deeply affected by the war in uniquely different ways but nevertheless, shave some commonality. They each lost everything they knew and had before the South's secession, but Jules is arguably the more fascinating of the two, because he comes from a distinctively personal experience with the history of slavery and its cruel reality. One particularly poignant moment sees the man who claims to be soulless let loose his indignation and frustration upon the local businesses, men with money and power but impotent when it comes to fighting their own battles. It's a memorable and heartfelt scene in a splendid but mostly forgotten western, a film more deserving for its style as well as its notably intelligent story.

Kino Classics brings 'Invitation to a Gunfighter' to Blu-ray on a Region A locked, BD25 disc inside the standard blue keepcase. At startup, viewers are taken directly to a static main menu.

The invitation is sent to Blu-ray with a great looking and highly-detailed 1080p/AVC MPEG-4 encode. The video comes with very good definition and resolution, showing that the source used is in great condition with minimal damage, and facial complexions are revealing with excellent lifelike textures during close ups. However, the elements could terrifically benefit from a fresh remaster and restoration as the picture also comes with that mild yellowish hue that develops over time, and there's the occasional white speck that pops up. Some scenes are bit a softer and blurrier than others, but a majority of the presentation looks fantastic.

Presented in its original 1.66:1 aspect ratio, contrast is fairly bright and well balanced with crisp, clean whites, from Brynner's clothing and the odd knick-knack to the buildings and the clouds in the sky. Black levels are also rich and true without taking away from the finer details in the darkest portions of the frame and provide a good deal of depth. Colors are cleanly rendered with primaries looking particularly vivid while secondary hues and other earth tones are bold and vibrant.

Along with the great video, the film rides into town with guns cocked and ready with a very pleasing DTS-HD MA mono soundtrack. Considering Kino brings this little-known gem as is, the film sounds rather fantastic for its age and the condition of the source. However, it does come with its share of minor flaws, such as some mild hissing, a bit of noise in the background and the occasional light pops in a few sequences.

Nevertheless, the lossless mix is, for the most part, fairly clean with great presence and clarity. Background activity and atmospherics are discretely heard throughout, providing the presentation with a broad sense of space and depth. The mid-range is clean and detailed, allowing for excellent separation and fidelity in the score while every gunshot remains distinct. As would be expected, bass feels somewhat limited, but it's appropriate with some appreciable weight. Throughout the movie, dialogue takes top priority, never failing to deliver every emotive line with outstanding clarity.

Starring Yul Brynner and George Segal, Richard Wilson's 'Invitation to a Gunfighter' is a western gem that really belongs in the list of classics. Sadly, this wonderfully well-made and thoughtful morality tale is mostly forgotten, but the film still entertains, thanks to the excellent performances and a story that engages viewers right from the start. The Blu-ray arrives with a great audio and video presentation, though it nonetheless is deserving of a restoration of the original elements. Although the film finds its way to home theater sans supplemental material, the overall package is a worth a look for genre fans.

Sale Price 7.99
List Price 18.35
Buy Now
3rd Party 9.11
In Stock.
See what people are saying about this story or others
See Comments in Forum
Previous Next
Pre-Orders
Tomorrow's latest releases