In the middle of her family's move to the suburbs, a sullen 10-year-old girl wanders into a world ruled by gods, witches, and monsters; where humans are changed into animals; and a bathhouse for these creatures.

A young girl in the back of a car. Moving to a new city. All 10 year old Chihiro Ogino wants is for her parents to turn the car around and go home. But when Dad takes a wrong turn and decides to explore what appears an abandoned amusement park, Chihiro finds herself alone in a mysterious world ruled by an evil witch named Yubaba.

Lose your identity; lose your soul and be trapped here forever.

And so Chihiro must navigate a complex and wondrous and terrifying world -- alone for the first time -- in order to help her newfound friends and save herself so she can rescue her parents and escape. 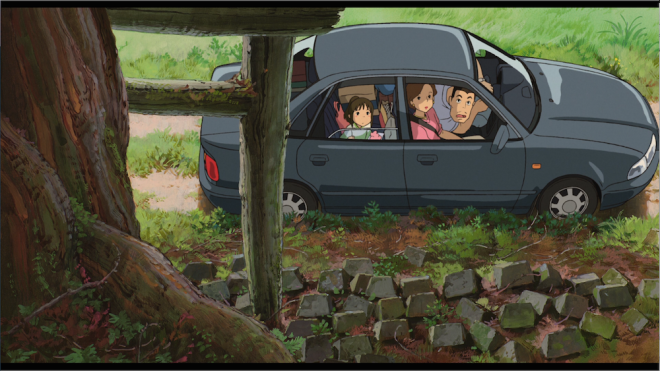 Animé auteur Hayao Miyazaki stunned audiences around the world with 'Spirited Away' upon its initial 2001-2001 releases. Blockbuster filmmaking at its finest -- a film that's equal parts grand and intimate -- 'Spirited Away' was the first film to make $200 Million Dollars before opening in the United States. To this day, it sits atop Japan's list of most successful movies ever released in the country, besting both 'Avatar' and 'Titanic'.

In a random coincidence, I viewed 'Jupiter Ascending' and 'Spirited Away' back to back. I enjoyed 'Ascending' more than others, but also understand why it's a frustrating film for so many. Such flaws are even more apparently next to the structurally and thematically similar 'Spirited Away'.

Wait, are you serious?

Yup. Both films set out to explore complex worlds with female protagonists who have to learn to navigate treacherous, previously unknown waters. While both excel at world building, 'Spirited Away' gives Chihiro so much more to do, making Miyazaki's film a master class in simple storytelling set in rich environments. Despite its complexity (and a rushed production schedule), Miyazaki's filmmaking feels so effortless.

Not to imply that all movies need to be the same, but comparing these two films is also a reminder how important it is to have main character who don't mostly watch other people do things. Sure, Chihiro gets help from many people along the way, but she feels so much more engaged than the poor Jupiter Jones.

Sorry for the tangent; I just found the timely comparison apt.

'Spirited Away' is particularly fascinating to non-Japanese audiences. From my understanding in reading reviews and talking to my wife, who spend a lot of time in Tokyo, native Japanese audiences have a cultural awareness of all the different gods and spirits who fill Miyazaki's universe. For those who do not, it's kinda like watching 'Star Wars' for the first time, except the whole movie's set in the Tatooine Cantina. That is to say it's a rich tapestry.

The film's setpieces are equally breathtaking. Dynamic pacing, framing, and editing fill sequences with wonder and terror as needed. And, there are times where 2D animation feels 3D (in fact, after seeing what Disney did with films like 'The Lion King', I would argue 'Spirited Away' would make one heck of a conversion). While the production team utilized computers to enhance traditionall elements, the whole thing coalesces, retaining a hand made quality.

'Spirited Away' is a classic coming of age tale by way of a Brother's Grimm nightmare set in a Japanese afterworld-infused universe. It is beautiful and mesmerizing and a lot of fun for film fans of all ages while managing to seed serious commentary on the environment and pollution (evident in many other Miyazaki productions). I honestly wouldn't even know where to begin critiquing it. I'm simply in awe. 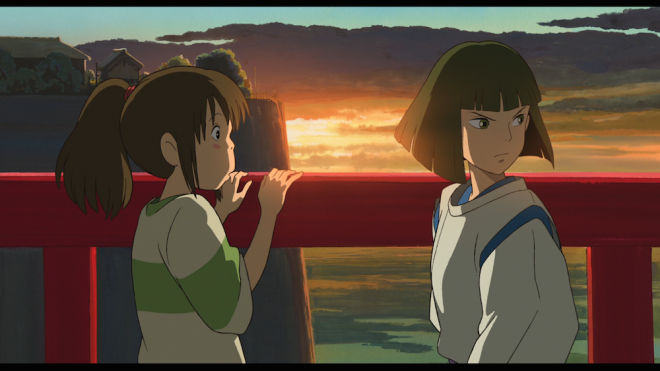 'Spirited Away' arrives on Blu-ray in North America distributed by Buena Vista Home Entertainment. The two-disc packaging houses one DVD and one BD-50 playable in Regions A, B, and C. There is no Digital Copy. Blu-ray trailers include 'Aladdin: Diamond Edition', 'Inside Out', and a smokefree.gov PSA featuring Cruella DeVille.

'Spirited Away' offers a resplendent, reference quality high definition presentation, framed in a 1.85:1 Aspect Ratio and encoded in MPEG-4 AVC.

Watching Miyazaki Blu-rays is like a witnessing a painting come to life. Awash in rich reds and other bold colors, this movie is utterly dazzling in high definition. There's so much care to detail -- floating ferry boats glow in the night; you can even see the zipper of a man running at the screen. Each individual frame delights in its composition and, in animated, entices the eye. Characters, human and otherwise, and wonderful rendered and move about in interesting ways. And black levels are accurate and dark.

'Spirited Away', much like Miyazaki's many other works, is a visual feast for our HD displays. Eat up, my friends.

[NOTE: Since I haven't personally seen the 2003 DVD release, which apparently had a 2.00:1 aspect ratio, I am unable to comment as to how the affect or changes the film. However, as I said above, this Blu-ray is a stunner.]

In terms of sonics, these tracks are pretty even. Dialog is clear as can be. The musical score envelopes and soars. LFE rumbles and booms as mighty creatures stomp and step. And the surround / sound effects elements are superb -- from the subtlety of buzzing bees and other environmental, to the overall immersion of wind and rain, it's sometimes hard to remember that this film is animated. Theses lossless tracks have equal parts heft, might, and nuance sure to delight the audiophiles reading.

The only real question is whether or not to watch the film in Japanese or English.

The former involves a more accurate tonal and cultural balance at the price of having to read for two hours; the latter frees up the eyes to explore Miyazaki's gorgeous environments, but doesn't quite capture the same feeling and tone as the original. It's really up to you what you enjoy more. For my two pennies, the Japanese version is the way to go; this English dub is okay and everyone's very proud of it, but it adds an unwanted layer of -- not sure if this is the best word -- melodrama, feeling a little hokey at times thanks to the differences in vocal intonations between English and Japanese.

Either way, you're in for a real treat. Surround sound has come a long way in the last decade, so it doesn't quite compete with highly articulate 7.1 or Atmos mixes, but 'Spirited Away' sounds great.

I don't have the original DVD handy, but it appears as though Disney has ported over many (possibly all) of the Bonus Features from the original 2003 DVD. And while it's a shame that there aren't any new bonus materials, the good news is a couple features appear here in high definition for the first time.

The Art of 'Spirited Away' (SD, 15:12). A look behind the scenes of Japan's most successful film ever as well as what went into creating the English Dub. A nice piece, but this one looks fuzzy on a big screen.

Original Japanese Storyboards (HD, 2:04:31). Not only can you watch the entire film's "rough draft" in black & white form, but it's also in MPEG-4 AVC HD with 5.1 Dolby Digital Japanese surround sound and English subtitles. Definitely an upgrade for fans, as the original release only included select scenes.

Hayao Miyazaki's 'Spirited Away' is a brilliant film filled with outstanding world building, strong characters, rich themes, and a sublime mix of terror and wonder. As a Blu-ray, it includes reference quality video and excellent Japanese and English audio options that easily surpass the original DVD release. Special Features are mostly carried over from that  release, but they too have been partially upgraded for HD. Highly recommended.

Sale Price 26.06
List Price 36.99
Buy Now
3rd Party 7.17
In Stock.
See what people are saying about this story or others
See Comments in Forum
Previous Next
Pre-Orders
Tomorrow's latest releases